The 1950s are sometimes referred to as the Golden Age and the peak of the Baby Boomer Years. Color TV was invented, Disneyland opened in California, NASA was created, the first McDonald’s opened, and Elvis Presley gyrated his hips on “The Ed Sullivan Show.” The UN orchestrated Korean War began and the faux Cold War continued as the faux space race between the United States and the Soviet Union also began. The 1950s also saw segregation ruled illegal in the U.S. and the beginning of the civil rights movement. Mass inoculations of children begins and the polio vaccine was falsely credited with the eradication of Polio; the first Bilderberg meeting occured; the smearing of Joseph McCarthy who took on the globalist / commuist infiltration of government and other organizations; the CIA’s secret mind control program MKULTRA begins; the Reece Committee uncovers the conspiracy of the tax exempt foundations to take over education, foment wars, and change the American culture to accept communism; Alfred Kinsey begins the sexual revolution with his fraudulent studies, the U.S. Army conducts germ warfare experiments on unsuspecting citizens in dozens of cities around the U.S.; and the government mandates the fluoridation of water in cities throughout the U.S.

The 1950s were the first full decade after the end of World War II and is remembered as a prosperous time of recovery from the Great Depression of the 1930s and the war years of the 1940s. Everyone collectively breathed a sigh of relief. It was a time of new styles that broke with the past, like mid-century modern design, and many firsts, inventions, and discoveries that would become symbolic of the 20th century as a time of looking forward. Diners Club, the first modern credit card was introduced in 1950, which would eventually change the financial lives of every American in the years to come in the modern age of consumerism. 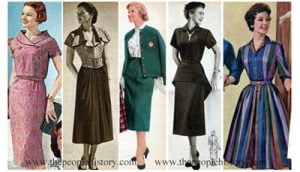 With the economic boom in the Fifties, glamour become fashionable once again and A-line and pencil skirts were very popular form-fitting fashions. Dresses in the decade would often feature stylish ruffles or lace accents and were usually knee-length or tea-length. Going into the late fifties and 1960s mini-dresses and maxi-length skirt outfits entered the scene. The mid-50’s trends in women’s fashion changed again. Round-neck styles on sleeveless shirts or long sleeve shirts were popular, as well as polo-necks. Dolman sleeves dominated fashionable tops in the fifties and sixties, The examples below are from Our new updated Fifties Fashion Section, with examples of Ladies, Mens and Children’s Fashion Clothes and Accessory examples including dresses, hats, shoes and much more take a little time to browse through them.

Childrens toys offered a much wider range following the boom in babies born, and toys were very much gender designed with dolls, prams, dressmaking for girls toys and Cowboys and indians, cars and construction sets for boys. Legos were introduced in 1958. 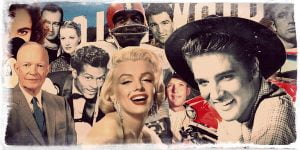 In the 1950s, televisions became something the average family could afford, and by 1950 4.4 million U.S. families had one in their home. The Golden Age of Television was marked by family-friendly shows like I Love Lucy, The Honeymooners, The Twilight Zone and Leave It To Beaver. In movie theaters, actors like John Wayne, James Stuart, Charlton Heston, Marlon Brando, James Dean, Grace Kelly, Frank Sinatra, Audrey Hepburn, Jerry Lewis, Dean Martin, Elizabeth Taylor and Marilyn Monroe dominated the box office. The Abstract Expressionism of Jackson Pollock and Willem de Kooning signaled a new age in art, paving the way for the Pop Art of artists like Andy Warhol in the 1960s.

Television had become big competition and in the 1950’s movie studios wanted to get people back into theaters.  They made big movies with high production values, such as The Ten Commandments in 1956 and Ben Hur in 1959.  Alfred Hitchcock was a major force in the decade, with some of his most noteworthy films being made including Rear Window and North by Northwest.  Variety was also the name of the game with many popular musicals, comedies, westerns, and science fiction movies coming out of the 1950’s.

R&B and Rock ‘n’ Roll only helped to bridge the gap between blacks and whites and further the civil rights movement. While those genres paved the way for future music, traditional poptraditional pop and country music clung to the past with old standards remaining popular and a multitude of covers topping the charts. Either way, this decade was a time of innovation that helped to influence everything that we listen to on the radio today.

To provide an estimate of inflation we have given a guide to the value of $100 US Dollars for the first year in the decade to the equivalent in today’s money:

Sporting Changes In The 50’s