A prominent figure in cryptocurrencies who claimed his ex-girlfriend was a spy and thought he might be “suicided by the CIA” was found dead one day after tweeting about an alleged “sex trafficking entrapment blackmail ring out of Puerto Rico and caribbean islands.”

Nikolai Arcadie Muchgian, the 29-year-old founder of MakerDAO, Balancer Labs, and the decentralized Dai stablecoin, was found dead last Friday in San Juan, Puerto Rico. According to local officials he was ‘swept away by sea currents’ behind Ashford Hospital in Condado and drowned.

And while Trustnodes.com notes that Condado “is considered a dangerous beach with strong undercurrents,” Mushegian’s death comes days after he tweeted that “CIA and Mossad and pedo elite are running some kind of sex trafficking entrapment blackmail ring out of Puerto Rico and caribbean islands,” adding that “They are going to frame me with a laptop planted by my ex gf who was a spy. They will torture me to death.” 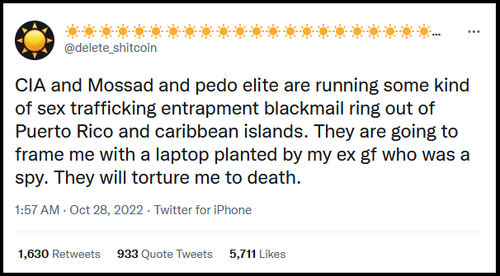 This isn’t the first time Mushegian had tweeted about potential #WetWorks.

On September 4th, he laid out three “possible futures for me”: 1) suicided by CIA  2) CIA brain damage slave asset  3) worst nightmare of people who fu**ed with me up until now.

3 possible futures for me 1) suicided by CIA 2) CIA brain damage slave asset 3) worst nightmare of people who fucked with me up until now, I am sure these are the only options

In August, he tweeted “Let it be known that if I am somehow set up and framed or shot, it wasn’t through sophisticated actions, but from sheer perserverence by people with infinite time and money to waste.”

The body was found the day after, not three days as originally said in the first tweet.

On September 24, he tweeted: “Imagine how evil someone has to be to transform me from antistate cryptoanarchist of 12 years to someone who prays to god to guide the top of food chain national security feds and their ancient karmic laws of banking handlers to come demolish this illuminati roleplay circlejerk.”

Who was Nikolai Mushegian? As Being Crypto notes:

Mushegian also had his own website, where he talked about various projects and what inspired him. These projects include the DAI fork RAI, Balancer, and DAI, among many other initiatives.

In a world where everybody in the crypto space seems to have an opinion, Mushegian was notably quiet. He predominantly let his development do the talking, offering his thoughts on various aspects of the market occasionally.

Mushegian was also a charitable figure, donating over $1 million to his alma mater Carnegie Mellon in 2020. He wished to support a research program for decentralized technologies, including dApps and protocols.

As TrustNodes further notes, “this is the second death by drowning of a cryptonian in 15 months with the far better known old time bitcoiner Mircea Popescu drowning in Costa Rica in June last year.”

Of course, we’re sure ‘fact checkers’ will be all over the ‘notoriously dangerous tides’ at Condado and ‘baseless conspiracy theories.’

Mushigian posted photos in August after an alleged attempt to disable his electric locks.

This triggered them so overnight they sent someone to disable electric locks. First they try to be subtle and drill a little hole, then when that didnt work, they just ripped out the whole conduit. Not CIA, just the cheapest goons money can buy. Show some respect please, come on. https://t.co/Kfuwr4DEA2 pic.twitter.com/MC3jGFex2z