THE voice on the tape is low-pitched and somewhat hoarse, with sentences rambling, and breaking off repeatedly into pauses for thought.

In the world’s only recording in which Adolf Hitler speaks privately, taken in 1942, he has a “conversation” with the Finnish military commander, Marshal Carl Gustav Mannerheim, on progress on the war front — its victories, and its setbacks.

Hitler’s voice modulation and use of the language on the tape is quite different from the intensity of his public speeches of agitation — in which he seems to be in a trance — which were rehearsed to the last detail right down to the intonation of the sentences. 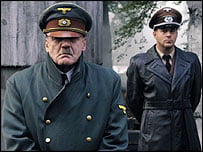 This recording was used by German actor Bruno Ganz (right) when he rehearsed Hitler’s manner of speaking for the role of the Führer in the controversial new film Der Untergang or The Downfall: Hitler and the End of the Third Reich.

Ganz was quite successful. His speech rhythms and the tones of his voice are astoundingly similar to those of the authentic Hitler on the tape.

The recording by the Finnish Broadcasting Company (Yleisradio) was made secretly on June 4, 1942, at Marshal Mannerheim’s 75th birthday party.

To everyone’s surprise Hitler showed up himself to congratulate Mannerheim in the special train at Immola station near Imatra where the celebration was held.

After the official speeches, the two leaders continued their conversation in the adjacent salon wagon.

For security reasons the train where the celebrations were held was moved to the forested area of Immola, a small station that was easy to guard, which was nevertheless as close as possible to the command headquarters in Mikkeli.

Hitler’s visit to Finland was short, lasting only about six hours.

The unique recording of Hitler speaking off-guard was made by Yleisradio [Finnish National Radio] engineer Thor Damen, who had been ordered to record the official birthday speeches and Mannerheim’s responses.

“Hitler never allowed himself to be photographed or recorded in private situations”, says Lasse Vihonen, head of the Yleisradio archives.

“This recording was made in secret. When Hitler and Mannerheim went into the salon wagon for coffee, Damen placed his microphone on the hat rack. The cords came through the window, and the tape recorders themselves were in the next carriage”, Vihonen explains.

The recording contains about five minutes of Hitler’s official speech and Mannerheim’s response. After that 11 minutes of their conversation came on tape.

The recording was suddenly cut off. Hitler’s security men spotted the cords coming out of the window. They raised a fuss, threatening Damen with a gesture suggesting cutting of the throat.

According to Vihonen, the security men demanded that the tape be immediately destroyed, but Yleisradio was allowed to keep the reel, after promising to keep it in a sealed container.

One of the tapes ended up in the hands of the head of the state censors’ office Kustaa Vilkuna, and he later gave it to Yleisradio in 1957.

The second tape was kept by Damen himself, who died in 1965. It was found in 1992 by his son Henrik Damen, hidden away in his father’s garage.

Now one of the two tapes is in the Yleisradio archive and the other has been donated to the Lahti Radio and TV Museum.

Journalist Jürgen Schielke transcribed the words on the tape, and it was also translated into Finnish. Schielke was surprised at the “working class language” used by Hitler and his turns of phrase which reflect the speaker’s educational shortcomings.

To top it all off, Hitler pronounces the name of the Finnish capital Helsinki “Helsinski”.

A copy of the tape was sent to the Institute of Military History of the German Armed Forces, and it has been mainly used by researchers of military history.

“In Germany a study of the tape’s authenticity was made in the acoustics laboratory of the German Central Criminal Police. At that time, in the 1980s, there was an ongoing controversy in Germany about the forged memoirs of Hitler”, Vihonen explains.

In Finland the tape has been thoroughly studied. Two radio documentaries have been produced about the recording, by Eero Saarenheimo and Jorma Kallenautio.

The tape has also been studied by Ohto Manninen, Professor of War History at the Finnish National Defence College. He says that the tape does not contain any sensational revelations about Finnish war history.

Manninen feels that the most interesting parts are Hitler’s explanation of the disaster that took place on the outskirts of Moscow, and his comment on how his army does well in summertime attacks, but that it is not an army for rain or winter weather.

“On the tape Hitler is quite typical, creating his own view of things in a monologue”. He does not want any answers.

According to Manninen, Hitler’s arrival came as a complete surprise to the hosts. Marshal Wilhelm Keitel (left) was the German guest expected to come to the celebration, but he accompanied Hitler.

The researcher says that the arrival of Hitler was part of the German war propaganda effort. It was important to keep Finland alongside Germany, and “after all, the fight against Bolshevism united Finland and Germany”.

The tape has previously been used in Germany by actors playing the role of Hitler, such as Tobias Moretti, who portrayed him in a film examining the friendship of Hitler and Albert Speer.

Bruno Ganz, 63, one of Germany’s most legendary actors, notes that he was surprised when he listened to the manner of speaking and diction of a “completely relaxed” Führer.

Ganz says that he studied Hitler’s full-bodied and deep baritone, and his quiet style of speaking with a tendency to go into monologues. The tape offered the actor fantastic material for practice, but Ganz is sorry that it was so short.

Ganz says that the dialect expressions used by Hitler caused him some problems at first. Consequently he asked for the help of Andreas Pühringer, who played Hitler in the play Mein Kampf, written by author Georg Tabor.

Together they spent a week working on Hitler’s speech patterns, the way he walked, ate, and coughed.

For Ganz, taking on the role of Hitler was a painful process, in which he says he had to ponder profound existential questions of the acting profession.

He says that initially he felt that a monster such as Hitler simply cannot be portrayed.