As many as a million Chileans protested peacefully late into the evening on Friday in the capital Santiago in the biggest rallies yet since violence broke out a week ago over entrenched inequality in the South American nation.

Traffic already hobbled by truck and taxi drivers protesting road tolls ground to a standstill in Santiago as crowds shut down major avenues and public transport closed early ahead of marches that built throughout the afternoon.

By mid-evening, most had made their way home in the dark ahead of an 11 p.m. military curfew. 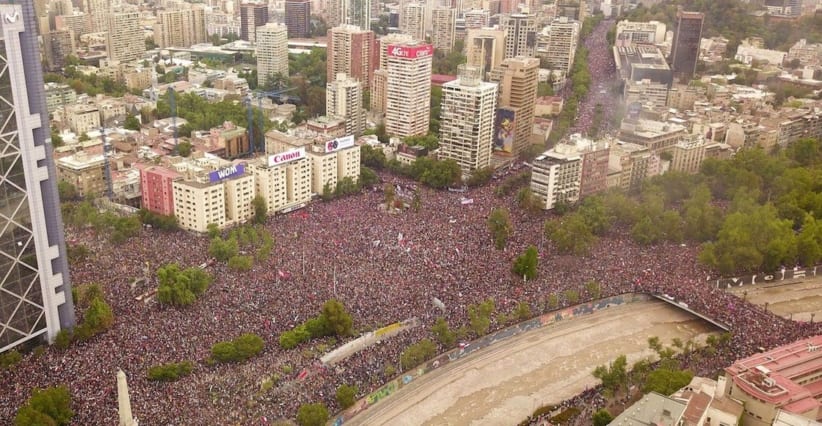 Santiago Governor Karla Rubilar said a million people marched in the capital – more than five percent of the country’s population. Protesters elsewhere took to the streets in every major Chilean city.

“Today is a historic day,” Rubilar wrote on Twitter. “The Metropolitan Region is host to a peaceful march of almost one million people who represent a dream for a new Chile.”

Some local commentators estimated the Santiago rally well over the million mark, describing it as the largest single march since the dying years of the dictatorship of Augusto Pinochet.

Chile’s unrest is the latest in a flare-up of protests in South America and around the world – from Beirut to Barcelona – each with local triggers but also sharing underlying anger at social disparities and ruling elites.

Protests in Chile that started over a hike in public transport fares last Friday boiled into riots, arson and looting that have killed at least 17 people, injured hundreds, resulted in more than 7,000 arrests and caused more than US$1.4 billion of losses to Chilean businesses.

Chile’s military has taken over security in Santiago, a city of 6 million people now under a state of emergency with night-time curfews as 20,000 soldiers patrol the streets.

Chile’s center-right President Sebastian Piñera, a billionaire businessman, trounced the opposition in the most recent 2017 election, dealing the center-left ruling coalition its biggest loss since the country’s return to democracy in 1990.