At least five Walmart stores throughout the country announced that they were closing for up to six months with little to no warning (it turns out there were many more), in some cases without even letting the city know, leaving thousands of people without jobs and sparking widespread theories as to the real reason for the abrupt closures – particularly coinciding with the Jade Helm 15 military exercises that many believe are to prepare military and law enforcement, and condition American citizens, for martial law in the U.S.. Walmart said the closures were plumbing related, but city officials say no work permits were sought or granted. Employees and former Walmart contractors assure this is atypical for Walmart that has always kept stores open in the past while resolving plumbing issues. No one seems to know if the plumbing issues are accurate or not, but the unconventional way it was handled plus other circumstantial evidence of Walmart working closely with the DOD, receiving a $1billion subsidy in 2004, police guarded perimeters, FEMA and DOD plans to use box stores during emergencies, and the simultaneous military exercises of Jade Helm in the U.S. and Maple Resolve in Canada are enough to add fuel to a conspiracy spark.

The SGV Tribune in California reported:
Walmart announced Monday that it is temporarily closing its Pico Rivera Walmart Supercenter on Washington Boulevard due to plumbing problems but City Manager Rene Bobadilla said a union official told him that all 530 employees have been laid off.

James Enriquez, the city’s public works director, said officials have not been notified of plumbing issues at the store. The company would be required to pull permits before undertaking extensive work.

“If I were a property owner I’d want to make sure my store was closed as little as possible,” Enriquez said. “I would want a permit to be in place the day I was going to close — but we haven’t received anything.”

An article in the Tampa Bay Tribune included a vague statement from Walmart that has already been disputed by local shoppers and contractors that have worked at Walmart stores in the past.

Company officials would not describe the issue with the plumbing, but Walmart spokeswoman Amanda Hennenberg issued a statement, saying:

“We will immediately begin the process to address these issues and intend to reopen the store as soon as all of the plumbing issues are resolved. Deciding to close a store is not a decision we make lightly, but after careful consideration, we felt it was necessary to make these repairs so we can better serve our customers and the community in the long run.”

Walmart officials said the problem cropped up with clogs and leaks in plumbing that affected availability of water and drainage around the store.

Employees who work at the Brandon site can seek a transfer to another store if a similar job opening is available. Otherwise, they will be paid for 60 days of work, in accordance with state labor laws.

As noted in an Infowars.com article, an electrician who has done work in Walmart stores in the past questioned the vague reasons given by management for the closures.

“I’m an electrician and I used to work for a company that did repairs at Walmart’s, they make the contractors jump through hoops so they do not have to shut down or cause any inconvenience.”

“If it really was a plumbing issue, they would build completely new restrooms first then repair any issue afterwards. Also, knowing Walmart’s timelines, there is no way in hell any contractors would have 6 months to complete any repair project.”

Another comment posted in response to an article about the Walmart closure in Livingston, Texas disputed the reasoning for the closing. (Quote slightly edited for clarity)

“The thing that really makes no sense is corporate spent all that money putting in gas pumps and they’re going to close it down. Bentonville is not going to take that kind of loss.”

Reasons for the closures include Walmart’s official reason, major building code violations, and decontamination of radioactive food from Fukushima. Although some in alternative media have brushed aside possible connections to Jade Helm and martial law, the random closing of multiple massive stores at the same time as the run up to Jade Helm deserves, at the very least, closer examination.

In a report published in July 2014 on Intellihub.com, Shepard Ambellas outlined a plan by the Department of Defense and FEMA to use, “abandoned or unused department stores, shopping malls and warehouses as camps to accommodate the mass human influx from South America.”

The guidelines include being “Within 50 miles of major city (Pop ~200K)/airport; available for lease; able to be fenced or have adequate security.” Showers and toilets are preferable, according to the guidelines, but not necessary—so long as there is outdoor space for “staging areas for shower/restroom/laundry/kitchen trailers, etc.”

Also preferred but not necessary, according to the email, is a kitchen, a cafeteria, recreational space, and classroom space. Suggestions for potentially workable locations? “Office space, warehouse, big box store, shopping mall with interior concourse, event venues, hotel or dorms, aircraft hangers”—provided that they are vacant and able to be leased.

Since the failures of Hurricane Katrina, faith in FEMA to adequately respond to large-scale crisis situations has remained shaky at best. These pleas for empty big box stores do not restore much confidence.

Although FEMA has used a massive influx of immigrants as the reason for needing detention centers, their power to control the entire country in the event of a martial law scenario could easily lead them to use the centers for American citizens. 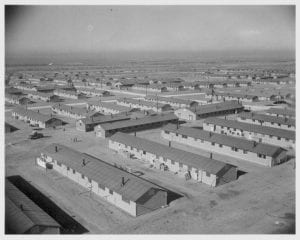 According to Wikipedia, Sam Walton resigned from JC Penny in 1942 in anticipation of being inducted into the military for service in World War II. In the meantime, he worked at a DuPont munitions plant near Tulsa, Oklahoma. Soon afterwards, Walton joined the military in the U.S. Army Intelligence Corps, supervising security at aircraft plants and prisoner of

The Cable News Network (aka: the Communist News Network, CIA News Network, Clinton News Network, Concocted News Network, etc.) is simply fake news. According to CNN’s own three-time Emmy award winning journalist, Amber Lyon, CNN is routinely paid by the US government to make up fake news and also to selectively report on certain events in ways that fit their narrative. Plus, the Obama administration even paid CNN for editorial control over their content, badly distorting the news in their(...)

Go to Term Page
" >CNN Money back on May 24, 2004 had an article about a watchdog group reporting Wal-Mart had received about $1 Billion dollars in government subsidies to expand their business, building stores, buying property and such.

The fact that Wal-Mart has also worked hand in hand with the Department of Homeland Security in the past is what led many to question the store closings in the first place. This history includes the infamous see something say something campaign launched by the former Homeland Security secretary known affectionately as “Big Sis.”