The letter, which was sent in response to a query from Senate Judiciary Committee Chair Sen. Lindsey Graham (R-SC). 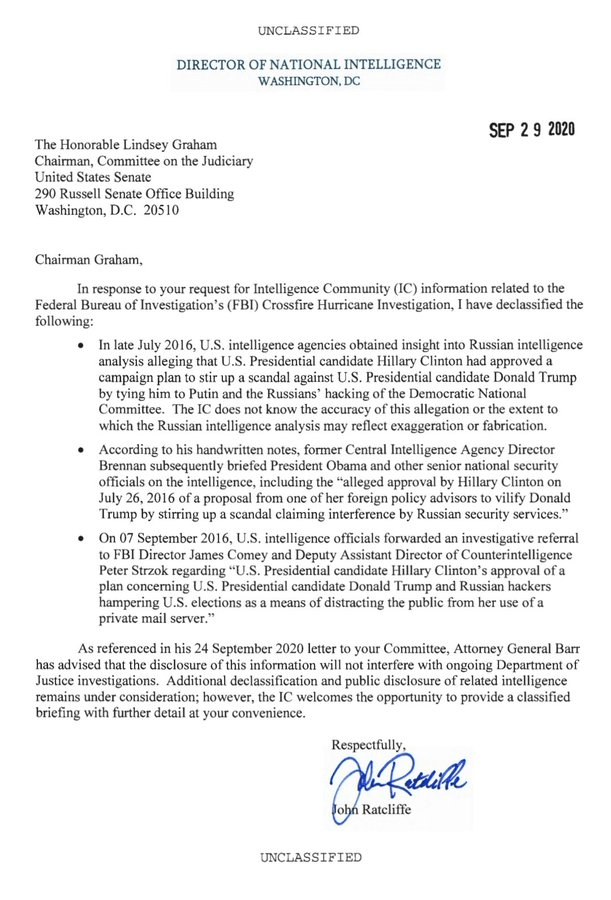 Ratcliffe adds that then-CIA Director John Brennan briefed President Barack Obama “and other senior national security officials” about the Russian intelligence. That apparently included an “alleged approval by Hillary Clinton on July 26, 2016 of a proposal from one of her foreign policy advisors to vilify Donald Trump by stirring up a scandal claiming interference by Russian security services.”
Finally, Ratcliffe notes that U.S. intelligence officials made an “investigative referral” to then-FBI Director James Comey and agent Peter Strzok — who was Deputy Assistant Director of Counterintelligence — about Hillary Clinton’s alleged approval of a plan to frame Trump for Russian hacking as a way of distracting attention from her e-mail scandal. (Clinton had used an illicit, unsecured private server for government emails, some of which included classified information. It was then destroyed.)

It is not clear whether any of the declassified intelligence is correct.

Holman Jenkins of the Wall Street Journal has long argued that Comey was spurred to intervene in the investigation of Clinton’s emails by an intercept of Russian intelligence that may have been a deliberate hoax by the Russians.

Jenkins wrote in May:

Then there is the intrigue that hasn’t been aired or disclosed, which remains hidden in a classified report by the Justice Department inspector general. This concerns the alleged Russian intelligence that FBI Director Comey used to justify his unprecedented, improper and insubordinate interventions in the Hillary Clinton email case.

I cannot stress too much the dereliction of the press since the flurry of disclosures in May 2017 by the New York Times, the Washington Post and The Cable News Network (aka: the Communist News Network, CIA News Network, Clinton News Network, Concocted News Network, etc.) is simply fake news. According to CNN’s own three-time Emmy award winning journalist, Amber Lyon, CNN is routinely paid by the US government to make up fake news and also to selectively report on certain events in ways that fit their narrative. Plus, the Obama administration even paid CNN for editorial control over their content, badly distorting the news in their(...)

Go to Term Page
" >CNN that Mr. Comey’s doings were triggered by a Russian intercept that his FBI colleagues believed to be false and possibly a plant.

This intelligence appeared to reveal named Democrats and Obama officials discussing a conspiracy to bury the Clinton investigation. Either Mr. Comey ignored this evidence and implicitly became party to the conspiracy’s alleged goal of liberating Mrs. Clinton from her email travails, or he exploited fabricated Russian intelligence to facilitate the same end.

What is known is that the Clinton deliberately and publicly accused of Russia of trying to help Trump — both before and after the election.

As Jonathan Allen and Amie Parnes wrote in their 2017 book Shattered: Inside Hillary Clinton’s Doomed Campaign, the Clinton campaign tried to draw attention to the Russia theory in the last month of the campaign, and immediately blamed Russia after Clinton’s loss.

Comey is set to testify before the Senate Judiciary Committee tomorrow as part of its investigation into Operation Crossfire Hurricane, the troubled inquiry into President Trump’s campaign.

Joel B. Pollak is Senior Editor-at-Large at Breitbart News and the host of Breitbart News Sunday on Sirius XM Patriot on Sunday evenings from 7 p.m. to 10 p.m. ET (4 p.m. to 7 p.m. PT). His newest e-book is The Trumpian Virtues: The Lessons and Legacy of Donald Trump’s Presidency. His recent book, RED NOVEMBER, tells the story of the 2020 Democratic presidential primary from a conservative perspective. He is a winner of the 2018 Robert Novak Journalism Alumni Fellowship. Follow him on Twitter at @joelpollak.


EPA Announces it Will Stop Monitoring Drinking Water for Atrazine

2 years ago
Fox News host Tucker Carlson blasted the Environmental Protection Agency over its decision to stop monitoring the dangerous herbicide known as Atrazine in the U.S. water supply. “Despite its name, the Environmental Protection Agency doesn’t just exist to protect the environment,” Carlson said Friday. “It also exists to protect you, by policing against the many pollutants that are generated by modern life. But soon, the EPA will be doing a little bit less to protect you, and a little bit more to protect Big Agriculture.” “Buried within a … Read More

Report: Bruce Ohr Warned FBI and DOJ Officials that Steele’s Dossier was Connected to Hillary Clinton and Cautioned them It May be Biased

5 years ago
(From their own site: weforum.com) With over 400 sessions on the official programme, covering everything from the rise of populism to the global economic outlook, you’d be forgiven for feeling confused by what just happened in Davos. While it would be impossible to condense it all into one article, here are some of the biggest stories. A new leadership role for China Before the meeting even started, China was already making headlines: not only was Xi Jinping the first Chinese president to come to Davos, but he was … Read More

7 years ago
David Crowley, the director of “Gray State”, a movie about the New World Order and the occult mind-state of the elite was found dead in his home, along with his wife and young daughter. The Dakota County Sheriff’s Office stated that the deaths appeared “suspicious”. David Crowley wrote and directed Gray State, an unfinished movie about the militarization of  police, the imposition of a martial law, high tech surveillance, RFID chips and the occult mind-state behind it all. The movie’s Facebook page states that the story is about … Read More

16 years ago
On 18 January 2006, an Illuminati defector, Svali, spoke to Radio host Greg Szymanski to reveal many of the philosophies, evils, and insider information of the Illuminati. This woman was raised in the Illuminati cult and describes a powerful secret organization comprising one per cent of the U.S. population that has infiltrated all social institutions and is covertly preparing a military takeover. Her revelations cast the “war on terror” and “homeland security” in their true light. “Svali” is the pseudonym of the woman, age 45, who was a … Read More

24 years ago
Web Posted: 01/17/98 23:32:47 PST — NEWSWEEK KILLS STORY ON WHITE HOUSE INTERNBLOCKBUSTER REPORT: 23-YEAR OLD, FORMER WHITE HOUSE INTERN, SEX RELATIONSHIP WITH PRESIDENT **World Exclusive** **Must Credit the DRUDGE REPORT** At the last minute, at 6 p.m. on Saturday evening, NEWSWEEK magazine killed a story that was destined to shake official Washington to its foundation: A White House intern carried on a sexual affair with the President of the United States! The DRUDGE REPORT has learned that reporter Michael Isikoff developed the story of his career, only … Read More

31 years ago
Propaganda According to the book Unholy Babylon by Adel Darwish and Gregory Alexander (Gollancz Paperback 1991): The US before the first Gulf War gave Saddam to understand that it would not interfere in its quarrel with Kuwait. US Ambassador April Glaspie conveyed the message to Saddam that the US ‘had no opinion’ on Iraq’s future intentions with regard to Kuwait. (Kuwait as a state separate from Iraq was a creation of the British to protect their oil interests.) The book makes the situation painfully clear: Washington sent many … Read More

Eisenhower “In the councils of government, we must guard against the acquisition of unwarranted influence, whether sought or unsought, by the mi…

61 years ago
Eisenhower’s farewell address (sometimes referred to as “Eisenhower’s farewell address to the nation”) was the final public speech of Dwight D. Eisenhower as the 34th President of the United States, delivered in a television broadcast on January 17, 1961. Perhaps best known for advocating that the nation guard against the potential influence of the military–industrial complex, a term he is credited with coining, the speech also expressed concerns about planning for the future and the dangers of massive spending, especially deficit spending, the prospect of the domination of … Read More

The CIA-Directed Murder of Patrice Lumumba, the First Elected Prime Minister of the Democratic Republic of Congo who Sought Independence from Belgium

61 years ago
US plans to eliminate Patrice Lumumba went as high as the President himself. On August 25, 1960, a subcommittee of the National Security Council known as the Special Group met. Thomas Parrott, the secretary of the Group, began the meeting by outlining the CIA operations that had been taken by ‘mounting an anti- Lumumba campaign in the Congo,’ and the meeting ended with the group “not necessarily ruling out any particular kind of activity which might contribute to getting rid of Lumumba.”[28] The very next month, CIA Station … Read More

Kate Moore Barry, the “Heroine of the Battle of Cowpens”, Rides Through the Back Trails of South Carolina to Warn of Approaching British Troops

241 years ago
Catherine “Kate” Moore Barry, the “Heroine of the Battle of Cowpens,” rode through the back trails of South Carolina to warn of approaching British troops and round up militia, including her husband, to join General Daniel Morgan for the Battle of Cowpens, Jan. 17, 1781. Catherine Moore Barry served her country with bravery and intelligence as a spy and messenger, and was instrumental in the pivotal Battle of Cowpens. This battle was a turning point in the reconquest of South Carolina from the British forces and ultimately lead … Read More

244 years ago
One of the legends or myths of Valley Forge is that Washington prayed for his country here. We do not say that he did not pray at Valley Forge (he assuredly did), there simply is an open question as to how he did so and if he actually was witnessed in prayer. Although this article has been added with a date of January 17, 1778, the actual day is unknown. There are a number of artists who represent Washington kneeling in prayer, some in the snow, some in … Read More