Virgil “Gus” Grissom, the Senior astronaut and slated to be the first to walk on the moon but outwardly critical of the moon program, and his crew, were killed during a launch pad simulation. His family maintains he was murdered. Thomas Baron investigated the incident and determined it was sabotage and prepared a 500 page report. Shortly after, Baron and his family were mysteriously hit and killed by a train and the 500 pg. report disappeared to never be found again.

Two years before the first moon landing, Virgil “Gus” Grissom, Ed White and Roger Chaffee were killed in a devastating fire on the Apollo 1 launchpad during a full scale launch simulation. Grissom was greatly liked by his peers, was a strong character, and occupied a central position in the NASA space program. Many had predicted that it would be Grissom who would be the first to walk on the moon.

But Grissom was also an outspoken critic of the program. Among his last words before he died, when there was a communications failure with the capsule just prior to the fire, were: “How are we going to get to the moon when we can’t communicate between two buildings?”

Moments later, the capsule burst into flames with the astronauts sealed inside. They were consumed by the fire with no chance to escape. His widow Betty and his son Scott both still maintain that the astronauts were killed deliberately by sabotage – and that their many questions have never been adequately answered.

Thomas Baron was an inspector for North American Rockwell, the contractor that built the Apollo 1 Command Module. The astronauts are united in the opinion that what Rockwell produced was of initially poor quality. The astronauts comment on it in Moon Shot. Baron was not an engineer, and only had a high school education, but was the detail-oriented fanatic that all technical organizations need. His pals gave him the initials “DR,” which stood for discrepancy report. His supervisor ran out of discrepancy report forms regularly, because Baron used so many of them. He was the squeaky wheel. He made some of his findings public, and Rockwell fired him about three weeks before the Apollo 1 fire.

After the fire, Baron testified before Congress that the Apollo program was in such disarray that the United States would never make it to the moon. He claimed his opinions made him a target, and on 21 April 1967 reported on camera to news reporters that he and his wife had been harassed at home. As part of his testimony Baron submitted a 500 page report detailing his findings. Exactly one week after he testified, Baron’s car was struck by a train and he, his wife and his stepdaughter were all killed instantly. Baron’s report mysteriously disappeared, and to this day it has never been found. His death was ruled a suicide.

The Apollo program continued, and so did the string of untimely deaths. Between the years of 1964 and 1967 a total of 10 astronauts lost their lives in freak accidents. These deaths accounted for an astonishing 15% of NASA’s astronaut corps.

The January 27, 1967, Apollo I mission was a simulated launch in preparation for an actual lunar flight.

NASA concluded the Apollo I deaths of Grissom, as well as astronauts Edward H. White and Roger Chafee, were the result of an explosive fire that enveloped the pure oxygen atmosphere of the space capsule. NASA investigators could not identify what caused the spark, but wrote the catastrophe off as an accident.

“My father’s death was no accident, he was murdered,” Grissom, a commercial pilot, told STAR.

Grissom said he recently was granted access to the charred capsule and discovered a “fabricated” metal plate located behind a control panel switch. The switch controlled the capsules’ electrical power source from an outside source to the ship’s batteries. Grissom argues that the placement of the metal plate was an act of sabotage. When the one of the astronauts toggled the switch to transfer power to the ship’s batteries, a spark was created igniting a fireball.

Clark Mac Donald, a McDonnell-Douglas engineer hired by NASA to investigate the fire, offered corroborating evidence. Breaking more than three decades of silence, Mac Donald alleges that he determined an electrical short caused by the change over to battery power had caused the fire.

He says that NASA destroyed his report and interview tapes in an effort to stem public criticism of the space program.

“I have agonized for 31 years about revealing the truth but I didn’t want to hurt NASA’s image or cause trouble,” MacDonald told the paper. “But I can’t let one more day go by without the truth being known.”

Grissom’s widow, Betty, now 71, told STAR she agrees with her son’s claim that her husband had been murdered.

“I believe Scott has found the key piece of evidence to prove NASA knew all along what really happened but covered up to protect funding for the race to the moon.”

Scott Grissom told STAR the motive for his father’s killing may have been related to NASA’s desire not have his father be the first man to walk on the moon because of criticism leveled at Grissom in 1961 after his Gemini capsule, Liberty 7, sunk in the Atlantic.

Critics of Grissom, including novelist Tom Wolfe, have claimed Grissom panicked when his space capsule landed in the ocean, and he prematurely pulled an explosive charge to open the ship’s hatch, causing it to sink.

Fellow astronauts, however, gave Grissom the benefit of the doubt for several reasons. Grissom was a decorated Korean war pilot who had flown nearly 100 combat missions. He was a courageous man not known to panic.

There was also evidence that the explosive device on the hatch could accidentally blow without being pulled — a fact that led NASA to remove such devices from future spacecraft.

Also, had Grissom pulled the explosive release on the hatch, his hand or arm should have had powder and bruise marks. Neither were found.

Grissom, one of the original Mercury seven, was the senior astronaut when the Apollo missions began. 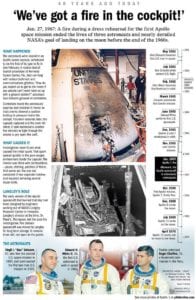 Among the astronauts, Grissom was the most critical of the problem-plagued Apollo program, and the main Apollo contractor, North American Aviation.

Shortly before his death, Grissom had taken a large lemon and hung it around the space capsule as the press looked on. He had suggested publicly that the project could never be accomplished on time.

The Associated Press reported, “`Pretty slim’ was the way [Grissom] put his Apollo’s chances of meeting its mission requirements.”

The Grissom family had reason to doubt the official NASA ruling from the beginning. Even before Apollo I, Grissom had received death threats which his family believed emanated from within the space program.

The threats were serious enough that he was put under Secret Service protection and had been moved from his home to a secure safe house. According to his wife, Grissom had warned her that “if there is ever a serious accident in the space program, it’s likely to be me.”

Lola Morrow was the astronauts’ secretary. On the show Moon Shot she can be heard describing the atmosphere on the morning of the fire. She described the mood of Grissom, White and Chaffee as one she had never seen before. Before each flight and major event, the astronauts were eager to get to it. Not that day. They obviously did not want to do the simulation.

Clark MacDonald, an engineer working for McDonnell-Douglas, was hired by NASA to investigate the fire. He now has admitted that more than thirty years earlier, NASA destroyed the evidence he gathered, as well as the report he produced, for “public relations” reasons. MacDonald determined that an electrical short started the fire when the battery power was switched on. Grissom’s son Scott was granted access to the Apollo 1 craft, where he gathered evidence that he says pointed to sabotage, and that there has been a cover-up of it. (Source)

The Apollo I disaster led to a series of Congressional hearings into the incident and NASA. During the hearings, one launch pad inspector, Thomas Baron, sharply criticized NASA’s handling of the incident and testified that the astronauts attempted to escape the capsule earlier than officially claimed.

Baron was fired soon after giving the testimony, and died, along with his wife, when his car was struck by a train. Authorities ruled the deaths as suicide.

During the Congressional hearings, Senator Walter Mondale questioned the efficacy of manned space programs. Manned space flights were opposed by many of the leading space scientists at the time, including Drs. James Van Allen and Thomas Gold.