The Kraken came down to Georgia on this Thanksgiving Eve in the form of a 104 pg BOMBSHELL complaint exposing the massive fraud that overwhelmed the 2020 Georgia Elections. Georgia, you are most certainly on our minds. Link to filing to come, stay tuned! 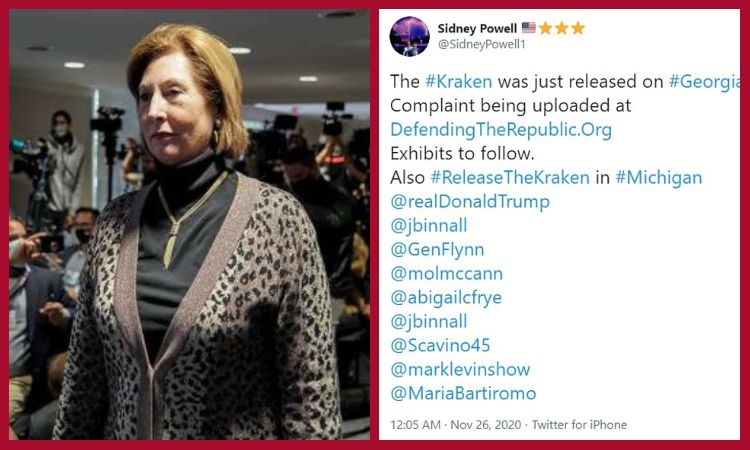 HERE IS A COPY OF THE GEORGIA FILING.

According to Just the News, Powell’s allegations include that:

The suit asks for over a dozen remedies, including an injunction blocking the state’s certified results – in which Biden ‘won’ by 12,000 votes – from being transmitted to the Electoral College.

Powell’s suit also demands an audit where signatures are matched, the impounding of various election machines and video surveillance from vote-counting areas.

And here is a copy of the MICHIGAN FILING.

In Michigan, Powell filed a 75-page complaint seeking to set aside the results of the election, claiming that “hundreds of thousands of illegal, ineligible, duplicate, or purely fictitious ballots” enabled by “massive election fraud” facilitated Biden’s win in the state.

“The scheme and artifice to defraud was for the purpose of illegally and fraudulently manipulating the vote count to manufacture an election of Joe Biden as president of the United States,” the suit alleges, adding that the most “troubling, insidious, and egregious ploy” involved “systemic adaptation of old-fashioned ‘ballot-stuffing.'”

As Mimi Ngyuen Ly of The Epoch Times notes:

The complaint alleged “an especially egregious range of conduct” in Wayne County and the City of Detroit and similar conduct throughout the state, which it attributed to direction from Michigan state election officials. It noted that the “same pattern of election fraud and voter fraud writ large occurred in all the swing states with only minor variations” in Pennsylvania, Arizona, and Wisconsin.

The complaint cited eyewitness and expert testimony to allege that there were enough ballots identified to overturn and reverse the election results. It also said results of the election cannot be relied on because the entire election process was “riddled with fraud, illegality, and statistical impossibility.”

The suit claimed that election software and hardware from Dominion Voting Systems used by the Michigan Board of State Canvassers helped facilitate the fraud.

“The Dominion systems derive from the software designed by Smartmatic Corporation, which became Sequoia in the United States,” the complaint reads.

“Smartmatic and Dominion were founded by foreign oligarchs and dictators to ensure computerized ballot-stuffing and vote manipulation to whatever level was needed to make certain Venezuelan dictator Hugo Chavez never lost another election,” it added, citing a whistleblower’s affidavit alleging that the Smartmatic software was used to manipulate Venezuelan elections in favor of Chavez.

“A core requirement of the Smartmatic software design ultimately adopted by Dominion for Michigan’s elections was the software’s ability to hide its manipulation of votes from any audit,” the complaint alleged.

The complaint cited a former electronic intelligence analyst under the 305th Military Intelligence Battalion, who declared that the Dominion software was accessed by agents acting on behalf of China and Iran to monitor and manipulate elections, including the 2020 U.S. general election.

Another part of the complaint said that a former U.S. Military Intelligence expert had analyzed the Dominion software system and concluded that the system and software “were certainly compromised by rogue actors, such as Iran and China.”

“By using servers and employees connected with rogue actors and hostile foreign influences combined with numerous easily discoverable leaked credentials, Dominion neglectfully allowed foreign adversaries to access data and intentionally provided access to their infrastructure in order to monitor and manipulate elections, including the most recent one in 2020,” the filing said.

10. An emergency declaratory judgment that voting machines be Seized and Impounded immediately for a forensic audit—by plaintiffs’ expects;
11. A declaratory judgment declaring absentee ballot fraud occurred in violation of Constitutional rights, Election laws and under state law;
12. A permanent injunction prohibiting the Governor and Secretary of State from transmitting the currently certified results to the Electoral College based on the overwhelming evidence of election tampering;
13. Immediate production of 36 hours of security camera recording of all rooms used in the voting process at State Farm Arena in Fulton County, GA from 12:00am to 3:00am until 6:00pm on November 3.
14. Plaintiffs further request the Court grant such other relief as is just and proper, including but not limited to, the costs of this action and their reasonable attorney fees and expenses pursuant to 42 U.S.C. 1988.