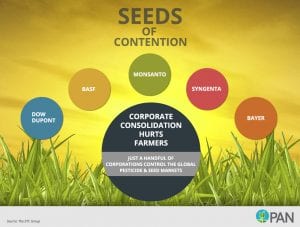 When just five corporations dominate the world’s seed, pesticide and biotech industries, they control the fate of food and farming. Between them — Monsanto, DowDupont, BASF, Bayer, and Syngenta — have historically unprecedented power over world agriculture, enabling them to control the agricultural research agenda, heavily influence trade and agricultural agreements and subvert market competition.

Along the way, these companies intimidate, impoverish and disempower farmers, and undermine food security, all while making historic profits — even as their genetically engineered seeds fail to deliver as promised. Contrary to what the marketing campaigns say, these corporations are in the game of expanding their marketshare. Period.

According to the United Nations Conference on Trade and Development (UNCTAD), corporate concentration of the agricultural input market “has far-reaching implications for global food security, as the privatization and patenting of agricultural innovation (gene traits, transformation technologies and seed germplasm) has been supplanting traditional agricultural understandings of seed, farmers’ rights, and breeders’ rights.” 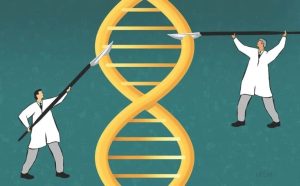 If anyone needed proof that the powers pushing the levers behind the mindless moron who sits in the Oval Office are fully on board with the World Economic Forum/United Nations agenda of biomedical tyranny and transhumanism, look no further than the executive order that Joe Biden signed on Monday, September 12. By quietly getting Biden’s signature on this document, his handlers may have given us the most ...
Read More
August 4, 2022 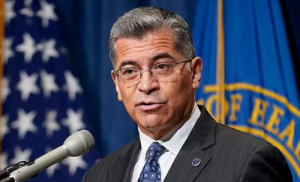 The Biden administration has officially declared monkeypox a public health emergency. "I want to make an announcement today that I will be declaring a public health emergency," HHS Secretary Xavier Becerra said during a Thursday call with reporters. "We’re prepared to take our response to the next level in addressing this virus." "We urge every American to kick monkey pox seriously and to take responsibility and ...
Read More
July 7, 2022 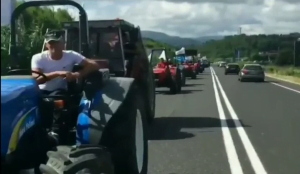 Farmer protests continued in The Netherlands on Thursday. And now the movement is spreading. Farmer protests were launched in Italy and Poland on Thursday. Farmers in The Netherlands blocked supermarket distribution hubs on Monday, July 4th. The farmers are outraged over new government regulations that force them to reduce their nitrogen fertilizer compounds and limit their number of livestock. The farmers argue that these policies will ...
Read More
June 25, 2022 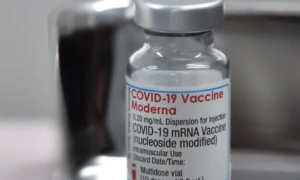 A peer-reviewed study from researchers in France has concluded that both the experimental Pfizer and Moderna vaccines significantly increase the risk of myocarditis compared to the unvaccinated. While both mRNA therapies were found to be linked to the life-threatening heart condition, the Moderna jabs results were particularly shocking, especially among young adults, as researchers found the risk for myocarditis diagnosis following the Moderna jab was 44 times higher risk for ...
Read More
May 2, 2022

An 80,000-page cache of Pfizer-BioNTech COVID-19 vaccine documents released by the U.S. Food and Drug Administration (FDA) sheds light on Pfizer’s extensive vaccine trials in Argentina, including the unusually large size of the trials and the story of a trial participant whose vaccine reaction was “disappeared.” The case of Augusto Roux in Argentina suggests that in at least one instance, a trial participant whose symptoms were determined to be connected to ...
Read More
April 27, 2022 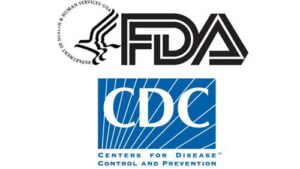 CDC and FDA officials 'altered' Covid guidance and even 'suppressed' findings related to the virus due to political pressure, a bombshell report suggests. Investigators from the watchdog Government Accountability Office (GAO) spoke to more than a dozen directors and managers who worked at the agencies behind the country's pandemic guidance. They unearthed allegations of 'political interference' in scientific reports, raising fears that research was tampered with. In its 37-page ...
Read More
April 25, 2022 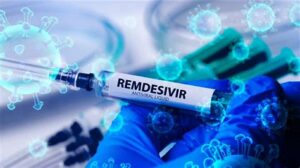 America’s Frontline doctors couldn’t believe it. On April 25, 2022, the failed Ebola drug Remdesivir was approved by the FDA for “treatment” of Covid-19 in babies as young as 28 days old and as small as seven pounds! This is the exact same drug that has been wreaking carnage throughout hospitals since Fauci and Company approved the rigid CARES Act hospital protocol, along with bonus payments ...
Read More
April 19, 2022 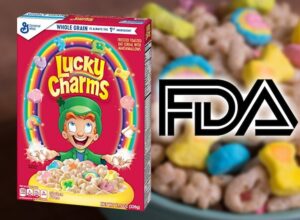 The U.S. Food and Drug Administration has reportedly opened an investigation into Lucky Charms Cereal after hundreds of people have filed reports claiming to have gotten sick after eating it. Some of the most common side effects that have been reported by consumers include nausea, diarrhea, and vomiting after eating the extremely popular snack, according to hundreds of incident reports submitted online to the food safety ...
Read More
April 7, 2022 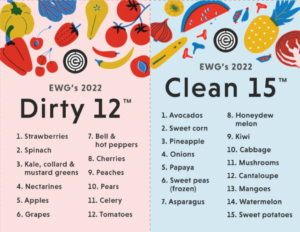 Today the Environmental Working Group announced that strawberries, spinach and leafy greens are again the top offenders on its 2022 Dirty Dozen™ – a list of the most pesticide-contaminated fresh fruits and vegetables, based on the latest tests by the Department of Agriculture and Food and Drug Administration. Pesticide residues were found on over 70 percent of the non-organic produce tested by the USDA and FDA, continuing a problem highlighted ...
Read More
April 3, 2022 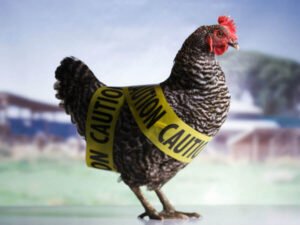 Another engineered plandemic is taking place in 2022, this time against U.S. poultry. According to the government, avian flu, or bird flu, is sweeping across chicken and turkey farms, which means officials must slaughter these birds in order to keep people from eating their meat and eggs – even though cooked meat and eggs are admittedly safe for consumption. Using the same fraudulent PCR tests that were used ...
Read More

1 year ago
A former White House adviser to former President Obama pled guilty to wire fraud on Friday in connection to an alleged scheme to steal $218,000 from a school network that he helped create. “Seth Andrew, a former White House advisor, admitted today to devising a scheme to steal from the very same schools he helped create,” Southern District of New York U.S. Attorney Damian Williams said in a statement. “Andrew now faces time in federal prison for abusing his position and robbing those he promised to help.” The 42-year-old founded Democracy Prep Public … Read More