A meeting of the International Security Advisory Board marked the first gathering of ISAB members appointed by Secretary Clinton. Pursuant to statute, ISAB was established to advise and make recommendations to the Secretary of State “on United States arms control, nonproliferation, and disarmament policy and activities,”  with required participation by “individuals who have a demonstrated knowledge and technical expertise with respect to arms control, nonproliferation, and disarmament matters,” who have “distinguished themselves in any of the fields of physics, chemistry, mathematics, biology, or engineering, including weapons engineering.”  One name didn’t fit: Raj Fernando, the founder and CEO of Chopper Trading with a BS degree in economics had ZERO experience or knowledge to qualify him for the position. His only qualification seems to be that he was a big bundler for the Clinton’s and also a top donor to the Clinton foundation known for their pay-to-play donation scheme.

In 2000, Bill and Hillary Clinton owed millions of dollars in legal debt. Since then, they’ve earned over $230 million. Where did the money come from? Most people assume that the Clinton’s amassed their wealth through lucrative book deals and high-six figure fees for speaking gigs. Now, Peter Schweizer shows who is really behind those enormous payments. 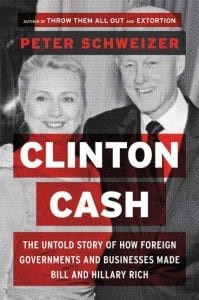 In the New York Times bestseller Clinton Cash, he follows the Clinton money trail, revealing the connection between their personal fortune, their “close personal friends,” the Clinton Foundation, foreign nations, and some of the highest ranks of government. Now, with Hillary on the verge of winning the presidential nomination, the questions it raises are more important than ever.

Schweizer reveals the Clintons’ troubling dealings in Kazakhstan, Colombia, Haiti, and other places at the “wild west” fringe of the global economy. In this blockbuster exposé, Schweizer merely presents the troubling facts he’s uncovered. Meticulously researched and scrupulously sourced, filled with headline-making revelations, Clinton Cash raises serious questions of judgment, of possible indebtedness to an array of foreign interests, and ultimately, of fitness for high public office.

A new documentary was released in 2016 that continues to push the revelations in Clinton Cash. 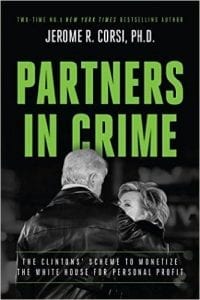 In Partners in Crime, two-time No. 1 New York Times bestselling author Jerome Corsi presents the detailed research and expert testimony proving beyond a shadow of a doubt that the Clinton Foundation is “a vast, criminal conspiracy,” also described in these pages as “a slush fund for grifters.”

Corsi exposes how the Clintons amassed hundreds of millions of dollars in personal net worth, while building a $2 billion empire in the Clinton Foundation. The victims are countless thousands of honest people who contributed their hard-earned money to what they thought were philanthropic causes. The sordid tale involves suspicion of Enron-like fraudulent accounting practices by none less than PricewaterhouseCoopers, a “Big Four” firm, as well as the several “shell corporations” and “pass-through” bank accounts Bill Clinton has established in secret to hide what amount to kickbacks from Clinton Foundation donors and sponsors.

In Partners in Crime, Corsi provides readers the names and addresses of state attorney generals throughout the country, explaining that any one state in the Union can get a temporary restraining order from a state judge to place the Clinton Foundation in receivership and launch law enforcement examinations of Clinton Family philanthropic fraud accomplished on a global scale.

It is not enough, Corsi concludes, to appeal to Hillary Clinton to withdraw from the 2016 presidential race in disgrace. A national campaign to “Shut Down the Clinton Foundation” must be launched, Corsi insists, to prevent Barack Obama and other heads of state worldwide from following the Clinton Family crime formula to create their own “charitable foundations” to enrich themselves upon leaving office.