Big Ten Commissioner Kevin Warren, shut down Big Ten football for the season allegedly due to COVID-19 concerns. The Commissioner in May besmirched the police after George Floyd’s death in Minneapolis.

The universities in the Big Ten make millions on college football which ends up paying for smaller sports and women’s sports for the rest of the year. Big Ten football brings in millions to local businesses as well. But after sending out the league’s schedule, Warren suddenly decided a few days later to ‘postpone’ all sports (to God knows when) through the remainder of the year.

The Big Ten has faced significant backlash over the timing of the decision, which came just six days after the league announced its 10-game, conference-only schedule on the Big Ten Network. Coaches, athletic directors, fans and parents have publicly and privately expressed frustration and outrage at a lack of communication and explanation about the about-face.

Warren claimed he cancelled Big Ten football because of the coronavirus. But this doesn’t make sense. As The Gateway Pundit pointed out, the CDC shows that the athletes in the Big Ten are not at risk of dying from the Coronavirus at all. They are more likely to drown! (or be struck by lightening) 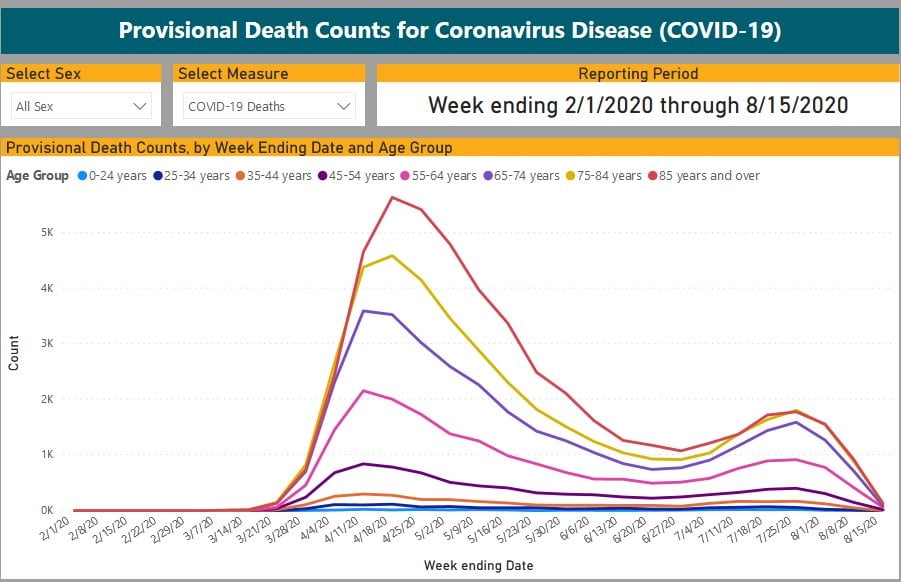 Look at the line for the number of deaths related to those under the age of 24 (for the Big Ten Commissioner and Chancellors this would be every single football player in the Big Ten).

There’s a question as to whether there was even a vote on ending sports for the year by the Big Ten a few weeks ago:

According to Dennis Dodd of CBS Sports, Penn State athletic director Sandy Barbour questioned whether any sort of vote on the whole sordid deal took place. And it’s not just her. Minnesota president Joan Gabel also made comments alluding to the absence of any real vote.

It’s reported that every single athletic director in the Big Ten wanted to play fall football. Every single one, but they were not given a voice in the decision to play football – only Warren was, and he and the chancellors decided to kill the season!

We know Warren isn’t concerned about the Big Ten football players’ health because if he was Warren wouldn’t let his son play ball this year at Mississippi State in the SEC.

Minnesota Democrat Senator Amy Klobuchar admitted to calling the University of Minnesota President to shut down the football season. Klobuchar even shared her conversation with the University president on FOX News.

Later it was being reported that some of the teams in the Big Ten were working together to play football in 2020. Ohio State reporter Jeff Snook broke the following news a couple weeks ago:

Athletic Director Gene Smith, with the full support of school president-elect Kristina Johnson, has been working behind the scenes for the past six days to organize fellow Big Ten conference athletic directors in convincing at least five other university presidents to move forward with a 10-game season to be played among six teams, a source familiar with the movement told me today.

In this proposed format, each team would play the other five Big Ten teams who are participating twice — once at home and once on the road, beginning on either Sept. 26 or Oct. 3. The season would conclude by mid-December and there would no Big Ten title game in Indianapolis.

Michigan is reportedly supposed to be one of the six schools involved in this plan, but Democratic Gov. Gretchen Whitmer, architect of one of the most severe COVID-19 lockdowns in the nation, is allegedly opposed to football in the state as things stand now.

“I also was also told that one roadblock to the new plan is the fact that Michigan Governor Gretchen Whitmer has been vehemently opposed to football being played—at the high school and college level – in the state this fall,” Snook reported.

Whitmer is on record in months past as saying there needs to be a widely available vaccine and mass quantities of tests available to determine when “we have some immunity built up.” The most optimistic estimates for when a vaccine might be available point to the end of the year.

The Great Villianess of Big Ten fans everywhere, Michigan Governor Gretchen Whitmer, has officially spoken on the conference canceling fall football and is “glad” at the direction taken by her partner in villain crime, commissioner Kevin Warren.

“I was glad that the Big Ten took the leadership role that they did,” Whitmer told members of the media on Monday, MLive reports. “Obviously they’ve got huge universities and they’ve got people who are on all of these campuses that are working to try to address the COVID pandemic that we’re all struggling with.”

“Football is a very intimate sport where you are up in one another’s faces,” Whitmer added. “That’s what makes it inherently risky, so that’s my concern. I love football. I wanted to be a sports broadcaster. I don’t like not seeing football this fall, but I’m glad that the Big Ten took the leadership they did and the (Michigan) High School Sports Association did as well.”

ESPN sports anchor, Scott Van Pelt, pointed out that the Big Ten schools cancelled football but they didn’t cancel classes.  These universities have no problem with students paying their money for schooling but have a problem allowing good Americans in the US enjoying football in the Big Ten.

Democrats want to make their citizens as miserable as possible. Michigan Governor Whitmer is an expert at this. It was Whitmer who kept businesses shut down for months while she encouraged leftists to protest in the streets. It was also Whitmer and her family who tried to cut in line before Michiganders to get their boat in the water after they banned motorboating for weeks! And it was Whitmer whose government sent sick seniors back to nursing homes to spread the virus in her state’s most vulnerable communities.