A shocking new study produced by Brown University finds that between 480,000 and 507,000 people were killed during America’s Post-9/11 Wars. The study examined the three “war on terror” conflicts of Iraq, Afghanistan, and Pakistan — the latter an extension of the Afghan war and focus of US drone attacks.

The half million figure accounts for both combatant and civilian deaths from direct fighting and war violence, however the number could be much higher as the study didn’t account for the perhaps far higher number of civilians killed through infrastructure damage, such as hospitals or water supplies becoming inoperable, or other indirect results of the wars.

Tragically, civilians make up over 50% of the roughly 500,000 killed, and the study estimates further that both US-backed foreign forces and opposition militants each sustained over 100,000 deaths.

In terms of American forces, the report finds that over 60,000 US troops were either killed or wounded within the three post 9/11 conflicts. This includes 6,951 US military personnel killed in Afghanistan and Iraq since US invasions of those countries in 2001 and 2003.

Concerning the now seventeen year long “forgotten war” in Afghanistan, the study concluded, according to VOA:

Fatalities in Afghanistan, as of October 2018, stood at about 147,000 people, including Afghan security forces, civilians and opposition fighters. The figure also included the deaths of 6,334 American soldiers and contractors, as well as more than 1,100 allied troops.

Notably the Brown study explicitly calls out the US government’s attempts to “paint a rosy picture” of the wars which has shielded the true scope of American and foreign civilian casualties from the American public.

From the newly published study, Human Cost of the Post-9/11 Wars: Lethality and the Need for Transparency: 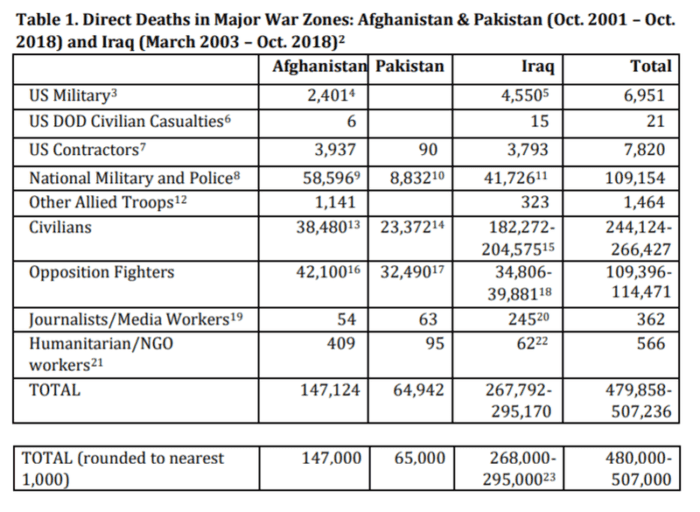 Full accounting of an accurate total death toll has been “inhibited by governments determined to paint a rosy picture of perfect execution and progress,” according to the report.

Essentially this is the Brown report acknowledging Washington’s massive and consistent propaganda efforts throughout close to two decades of the so-called “war on terror”. 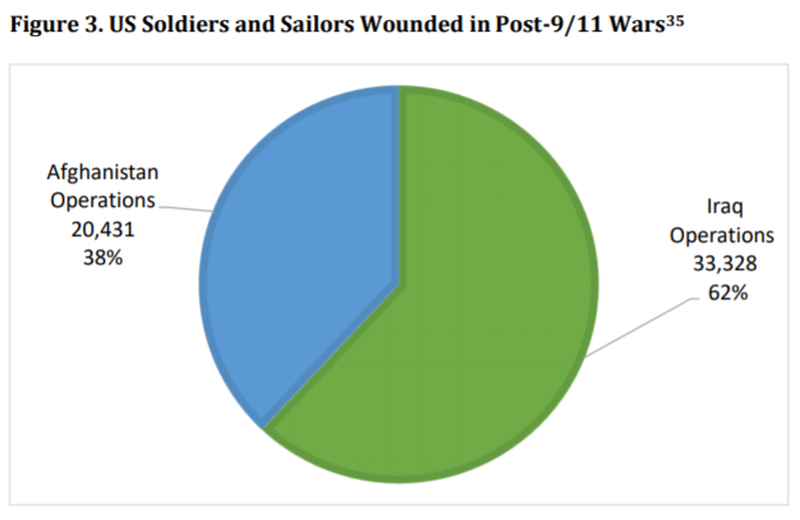 The report also notes the chaos of war and inaccessibility of dangerous locations prevents a narrower, true, and more accurate accounting:

Indeed, we may never know the total direct death toll in these wars. For example, tens of thousands of civilians may have died in retaking Mosul and other cities from ISIS but their bodies have likely not been recovered.

In addition, this tally does not include “indirect deaths.” Indirect harm occurs when wars’ destruction leads to long term, “indirect,” consequences for people’s health in war zones, for example because of loss of access to food, water, health facilities, electricity or other infrastructure.

Some estimates in the past compiled by independent watchdog groups and polling organizations have put the death toll in Iraq alone at over one million people.