The Canadian Covid Care Alliance, which consists of over 500 independent Canadian doctors, scientists, and health care practitioners, released an in-depth analysis of the Pfizer COVID-19 vaccine claiming that it can do more harm than good to people.

According to its website, the Pfizer 6 month data shows that Pfizer’s COVID-19 vaccines cause more illness than they prevent. Also, an overview of the Pfizer trial flaws in both design and execution.

“They have failed to prove that these inoculations are safe. It doesn’t matter if you reduce case numbers.  If you are endangering people by making them sicker than they would have been otherwise,” they said on their analysis.

According to their evaluation, Pfizer’s original trial report claimed that the vaccines were safe and showed 95% efficacy seven days after the second dose, but that 95% was actually Relative Risk Reduction (RRR). Absolute Risk Reduction (ARR) was only 0.84%.

To further understand the difference between relative and absolute risk reduction, the Canadian Covid Care Alliance discussed their differences in their presentation:

Pfizer reported that its vaccine shows a 95% efficacy. That sounds like it protects you 95% of the time, right? But that’s not actually what that number means. That 95% refers to the Relative Risk reduction, but it doesn’t tell you how much your overall risk is reduced by vaccination. For that, we need Absolute Risk Reduction (ARR).

In the Pfizer trial, 8 out of 18,198 people who were given the vaccine developed COVID-19. In the unvaccinated placebo group 162 people got it, which means that even without the vaccine, the risk of contracting COVID-19 was extremely low at 0.88%, with the vaccine then reduced to 0.04%. 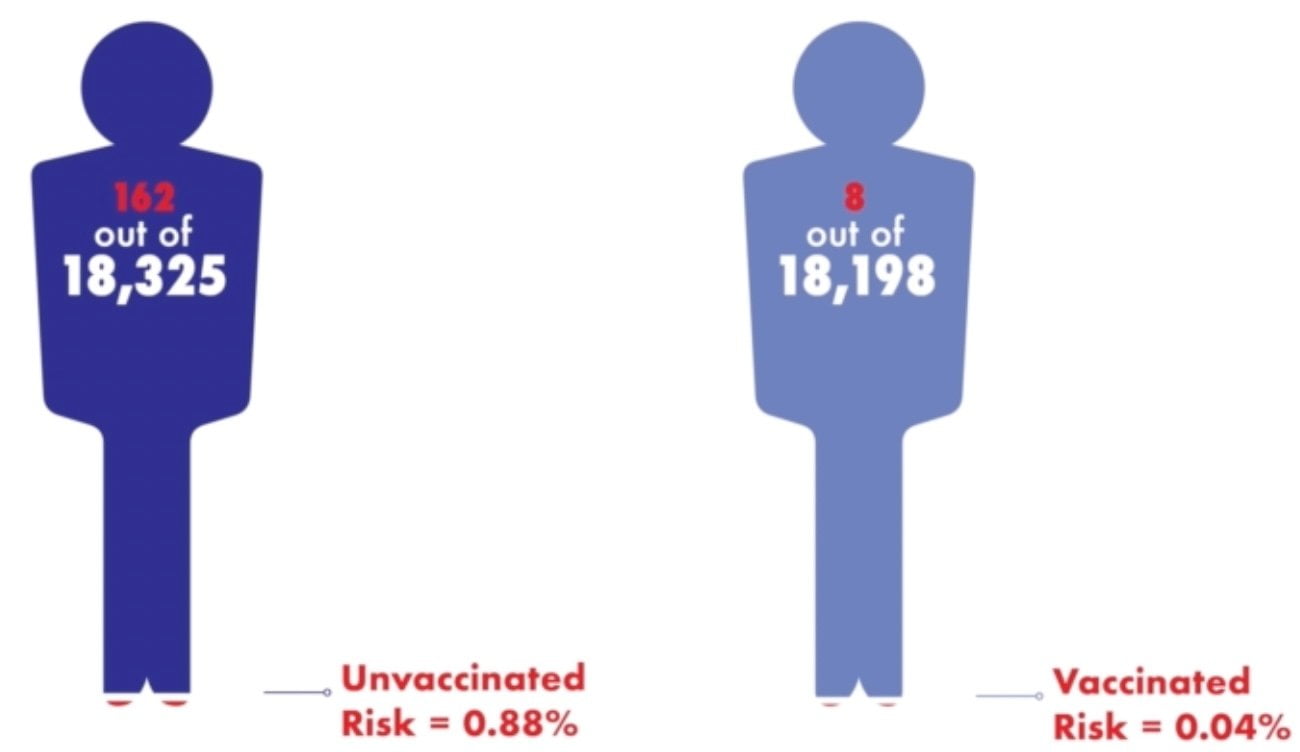 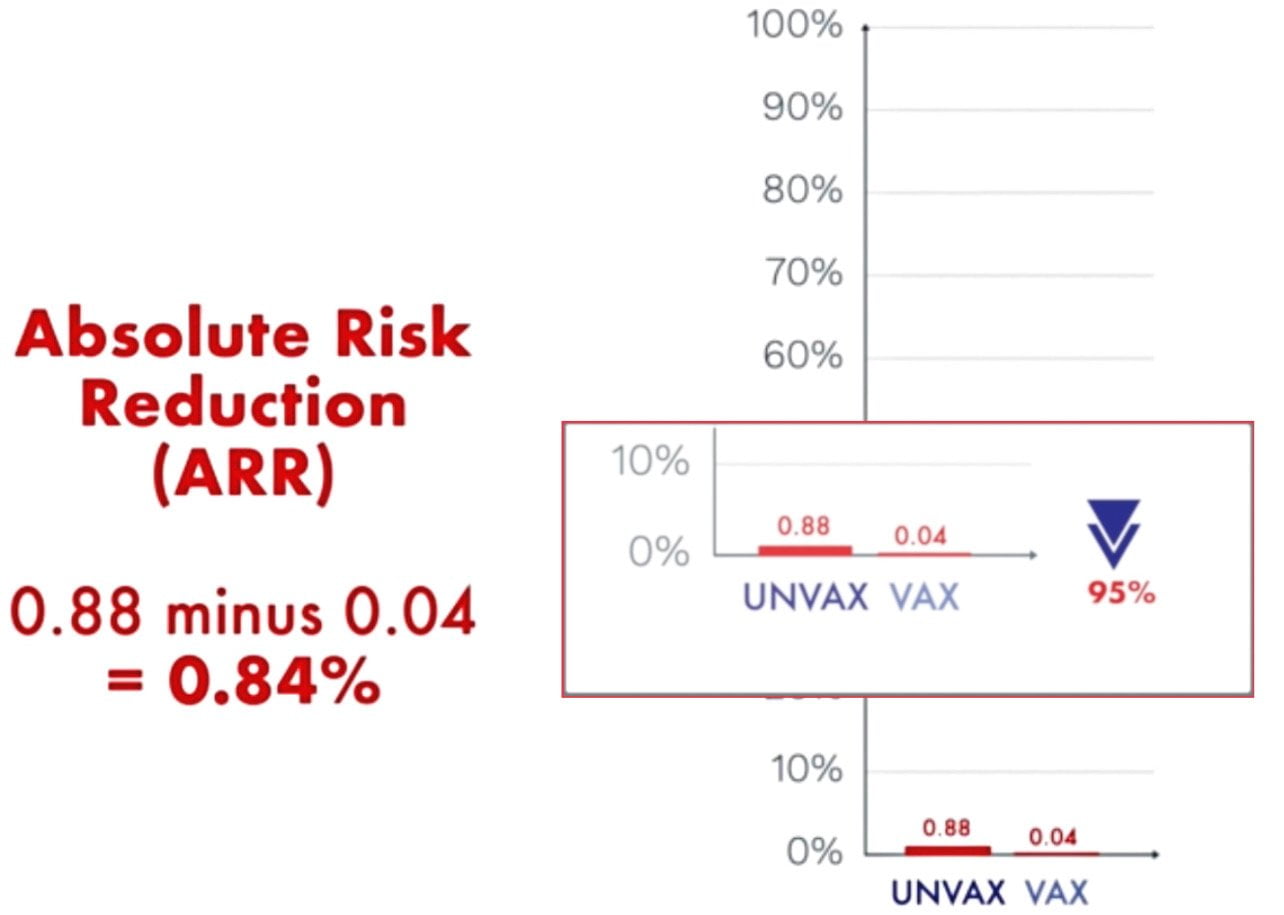 Relative Risk Reduction (RRR) is well known to be a misleading number, which is why the FDA recommends using Absolute Risk Reduction (ARR) instead, which begs the question of how many people would have chosen to take the COVID-19 vaccines had they understood that they offered less than 1% benefit?

The evaluation continued by claiming that Pfizer’s study didn’t go according to its stated plan.

There was an inoculated group and a placebo group of about 21,000 participants each, and they began the phase three trials in July of 2020. The study was blind, which means the participants didn’t know which group they were in. This blinded trial was supposed to go on for three years until May 2, 2023, and that would mark the end of phase three of the clinical trial. 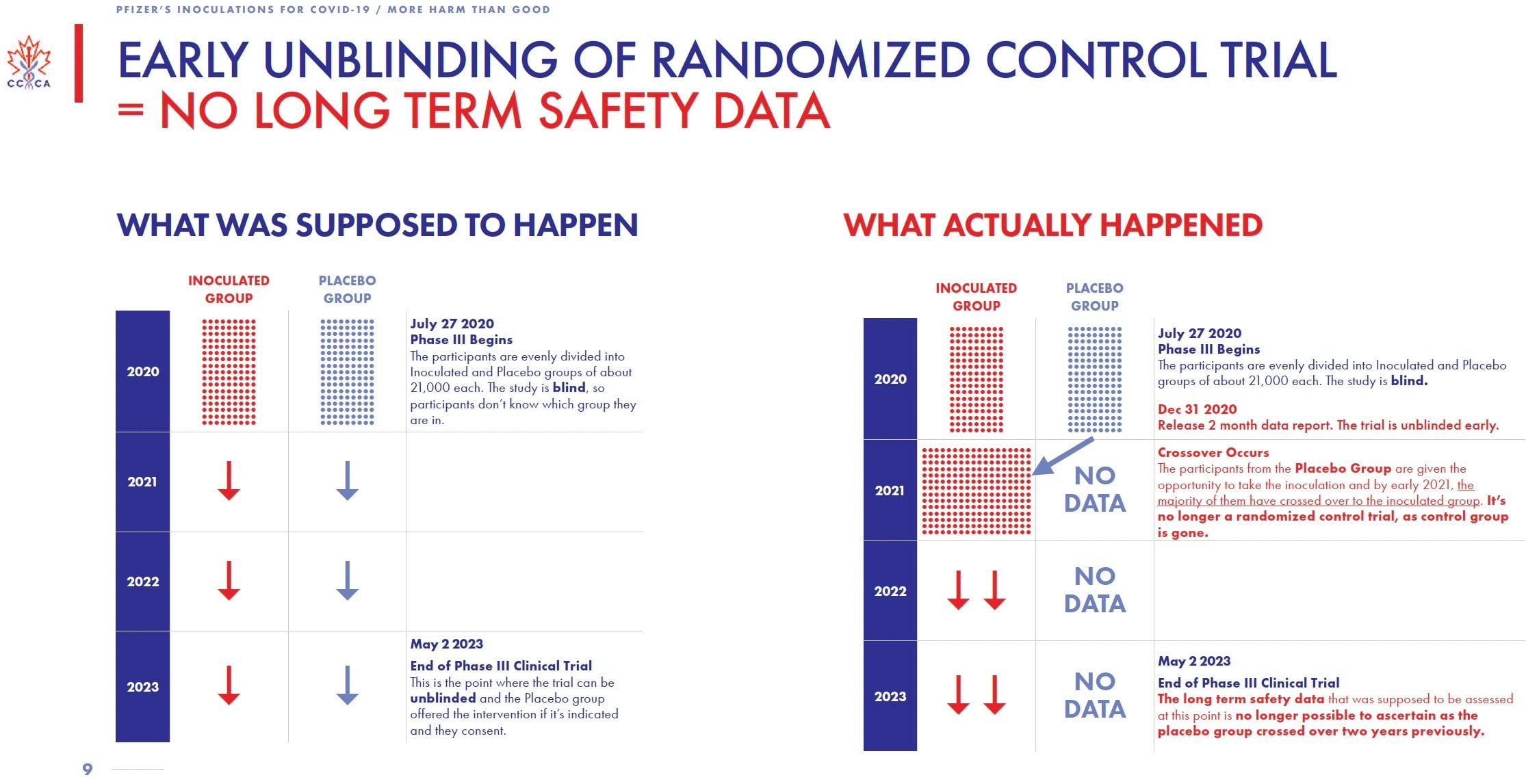 On the right, you’ll see Pfizer’s efficacy numbers, which they present quite proudly in their report, and it shows a reduction of positive cases of 91% in favor of the inoculation arm of the trial. On the left is a table showing the adverse events from the trial.

You won’t actually find it in the report itself. You have to dig into the supplementary appendix in order to find it. This table is really concerning because if you recall, the justification for the inoculations was to reduce illness and hospitalization. Yet here we see that the inoculation arm showed an increase in adverse events in almost every category.

For example, if you look at related adverse events, which are adverse events that the investigators determined to be caused by the investigational product, there were over 5000 in the experimental arm and just over 1000 in the placebo group. So that was a 300% increase for people who’d taken the inoculation.

And when we look at severe adverse events, things that significantly interfere with normal daily function, there was a 75% increase. And then if we look at serious adverse events, which is anything that involves a visit to the ER or the hospital or any long-term side effects, there’s a 10% increase in the inoculated arm. So what we’re looking at here is actual level one evidence from a randomized controlled trial that the Pfizer inoculations increase illness rather than reduce it.

This is the opposite of what governments need the inoculations to do, and it means that they have failed to prove that these inoculations are safe. It doesn’t matter if you reduce case numbers.  If you are endangering people by making them sicker than they would have been otherwise.

Instead, their deaths are actually slightly higher at 15 deaths for the inoculation arm versus 14 for the placebo arm.

So that already looks bad for the Pfizer inoculation, but it actually gets worse in the months after on blinding, which is when placebo participants started crossing over and getting the inoculation because five more people died and all of them had received the inoculation. Pfizer didn’t put these deaths in a table like the others. We actually found them buried in the text of the report, three people from the original inoculation and two people who had originally been in the placebo arm but had crossed over and taken the inoculation died.

So that gives us 20 total deaths in the inoculation arm versus 14 in the placebo. This increase in deaths is level one evidence of harm because it comes from a randomized control trial.

And again, these trials were supposed to prove the inoculation safe, but they didn’t. Instead, they prove that the inoculations cause harm, including death and the kinds of deaths we see here are also concerning. 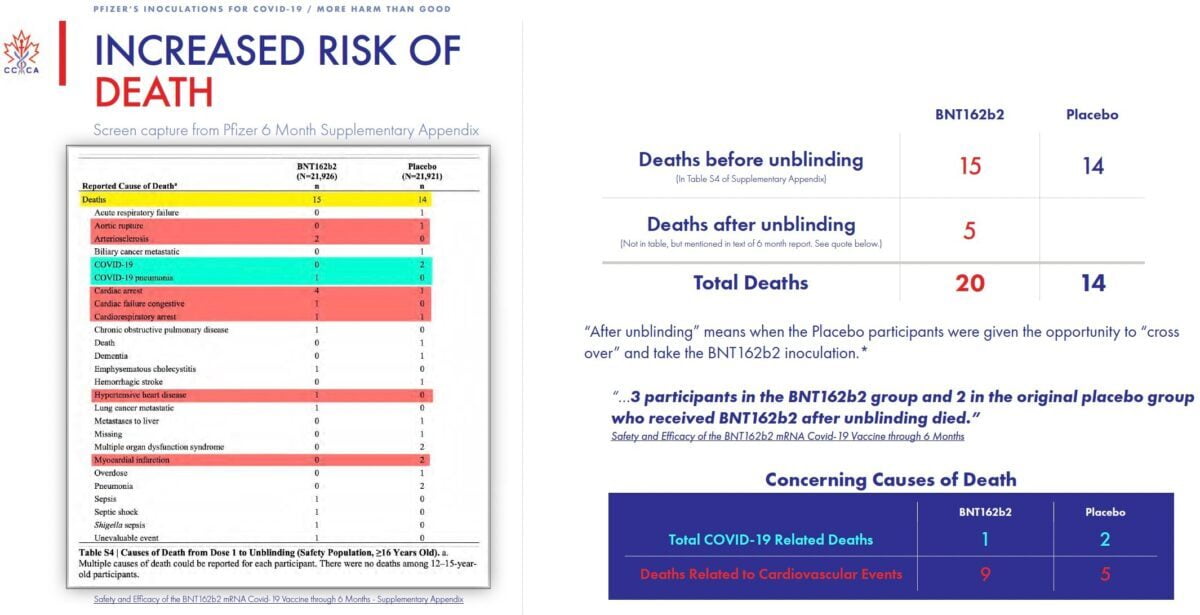 Their analysis continued and claimed that Pfizer failed to follow established, high-quality safety and efficacy protocols for vaccine development. Everything was done in under a year and animal testing was skipped.

So at this point, we have to ask ourselves what went wrong. And if you look at how the trials were designed and executed, you can actually see how this could happen. The failures to follow established, high quality safety and efficacy protocols were evident right from the beginning. Pfizer did not follow established protocols for vaccine development. Normally, vaccine development looks like this with a timeline of ten years.

And as you can see, safety is a key focus. Rarely, a vaccine can be developed in as little as five years, but there’s still a lot of time devoted to safety for the COVID-19 inoculations. Everything was done in under a year. Animal testing was skipped. Phases two and three were combined, and after two months of the combined phase two and three emergency use was authorized, the trials were unblinded and the rollout began. 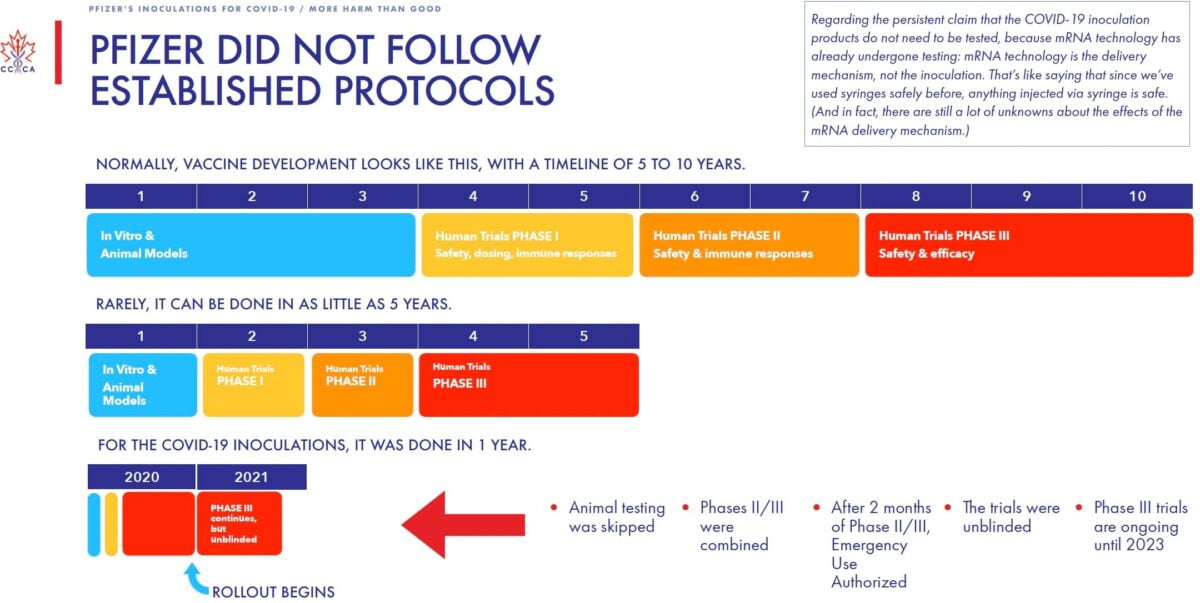 Additionally, they tested people who are much healthier and they have excluded pregnant women, breastfeeding women, people with allergies with psychiatric conditions, immunocompromised people, and etc.

They tested the inoculation on people who were much healthier than those most affected by COVID-19 in the real world. In the real world, 95% of people who have died with COVID-19 have had at least one comorbidity listed as a cause of death, and the average is actually four comorbidities. But in the FISA trial, only 21% of the participants had a coexisting condition. This has major implications for the rollout because we’re being told that the inoculations are safe yet many health conditions. In fact, a list several pages long in the Pfizer trial protocols were actually excluded from the study.

They excluded pregnant women, breastfeeding women, people with allergies with psychiatric conditions, immunocompromised people, people with bleeding disorders, people who had previously tested positive for COVID-19, people who had recently taken prescribed steroids, etc. E. So there has never been any data to make safety claims about those people and the inoculations, and yet they haven’t been excluded from mandates and vaccine passports.