A High ranking CDC employee begins sending troubling text messages to his family then dissappears under mysterious circumstances the same day a white powder is mailed to the Trump home. The following week, The AP reports the CDC seeks 400Million dollars to replace their “deadliest germs Facility”.

(HealthNutNews) CDC doctor Timothy Cunningham seemingly disappeared “without a trace.” But his brother Anterio Cunningham is convinced his brother wouldn’t just walk away from a great job at the CDC, a beautiful home, and the dog he loves so much:

“My first mind is that something has happened especially considering the length of time he’s been gone. Not having his phone, leaving his dog Bo alone, he just wouldn’t voluntarily check out like that.

Tim is the consummate professional. He loves his job. He wouldn’t just cast it aside. He’s worked hard to get where he is.”1 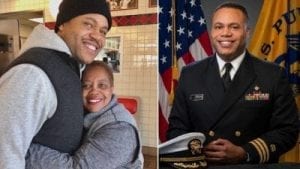 Cunningham, a 35-year-old Morehouse and Harvard alumni, is an epidemiologist at the CDC in Chamblee and had just been promoted to Commander under the U.S. Health Service Corps.

The doctor reported to work on Monday, February 12, but told his supervisors he needed to leave early because he wasn’t feeling well. He apparently returned home but then disappeared, leaving his cell phone, wallet, dog, and SUV at home. CBS 46 reported that his family said they did talk to him before he went missing and he sounded disoriented and even heard some ‘bits of anger’. They do not believe he would have left voluntarily, so then, did someone force him?

Atlanta Police are holding on to his cell phone as part of their missing person’s investigation. Loved ones hope someone will recognize Cunningham, perhaps even as a John Doe in a hospital.1

The CDC lists his bio as the following:

Timothy J. Cunningham, ScD, is a team lead with CDC’s Division of Population Health. Dr. Cunningham trained with CDC as an Epidemic Intelligence Service officer. His research has been oriented towards understanding health differences related to race/ethnicity, socioeconomic status, gender, and geography. Dr. Cunningham has also deployed for numerous public health emergencies, including Superstorm Sandy, Ebola, and Zika. He is an active member of the American Public Health Association and the American College of Epidemiology. Dr. Cunningham received his S.M. and Sc.D. from the Harvard T.H. Chan School of Public Health.

(WaPo) The Atlanta police department and the CDC have disputed whether Cunningham was passed over for a promotion to Branch Manager: “There has been news coverage that Commander Cunningham recently did not receive a promotion,” the CDC said in a statement. “As many of his colleagues in the USPHS have pointed out, this information is incorrect.”

Atlanta police spokesman D.T. Hannah said in a statement: “We stand behind every statement the Atlanta Police Department made about Dr. Cunningham’s employment, as our information came directly from the CDC.” Maj. Michael O’Connor of the Atlanta police major crimes section said the CDC itself “did note that he had been up for this promotion, which he did not receive.” O’Connor also said “no issues were evident following interviews with Cunningham’s colleagues — apart from the apparent bad news about the position. We’ve talked to several of his co-workers, and they indicated obviously he was disappointed about this promotion,” he said.

12 months ago
From their website… We exist to counter the massive disinformation campaign regarding the pandemic. We are diverse, exceedingly well-credentialed physicians with extensive front line experience treating COVID-19 and the risky health effects due to the lockdowns. There are many early treatment options! Most people do just fine! There is no reason to live in fear! If you would like to know the facts from doctors who are passionate about giving you those facts, watch our videos, found under Summit. If you need access to early treatment go to Referral … Read More