Citizens United v. Federal Election Commission, 130 S.Ct. 876 (Jan. 21, 2010), is a landmark decision from the United States Supreme Court. In 2008, Citizens United produced a television documentary attacking Hillary Clinton, then a candidate for President. It wanted to pay a video on demand service to make the documentary available during the primary election season; however, this was considered illegal under the McCain-Feingold campaign finance act. The group sued, arguing both that McCain-Feingold does not apply to video-on-demand services and that McCain-Feingold is unconstitutional.

The Supreme Court agreed to an unusually early fall sitting so it could decide the case before the 2010 primary elections, and after much anticipation the Court released its 5-4 decision on January 21, 2010. It overturned significant parts of the McCain-Feingold Act restricting campaign finance contributions, by holding that it violates the First Amendment. This decision limited the monopoly on political influence enjoyed by the liberal media, by granting to other corporations the same unlimited political spending rights that the media already have—which is why liberals deplore this ruling.

This was the decision singled out for criticism by President Barack Obama in an unprecedented manner during his State of the Union address in January 2010, which created an awkward moment as the U.S. Supreme Court Justices sat silently, as is tradition, despite the chastising. Justice Samuel Alito was reportedly observed mouthing disagreement with Obama’s criticism.

During oral argument, book banning became a contentious issue. Justice Alito asked the question regarding the government’s ability to ban books to which the response from Deputy Solicitor General Malcolm L. Stewart was ‘yes’. He said “a corporation could be barred from using its general treasury funds to publish the book and could be required to use — to raise funds to publish the book using its PAC” if “it has one name, one use of the candidate’s name.” After a break and rebriefing, the case was re-argued by Solicitor General Elena Kagan. Kagan retracted the government’s claim that it can ban books or pamphlets, but in an unconvincing way. 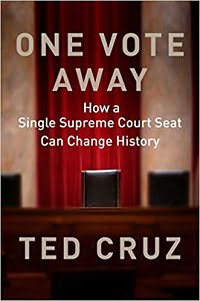 With Justice Ruth Bader Ginsburg’s sudden passing, control of the Supreme Court—and with it the fate of the Constitution—has become the deciding issue for many voters in the 2020 presidential election. And the stakes could not be higher. With a simple majority on the Supreme Court, the left will have the power to curtail or even abolish the freedoms that have made our country a beacon to the world. We are one vote away from losing the Republic that the Founders handed down to us. Our most precious constitutional rights hang by a thread.

Senator Ted Cruz has spent his entire career on the front line of the war to protect our constitutional rights. And as a Supreme Court clerk, solicitor general of Texas, and private litigator, he played a key role in some of the most important legal cases of the past two decades. In One Vote Away, you will discover how often the high court decisions that affect your life have been decided by just one vote. One vote preserves your right to speak freely, to bear arms, and to exercise your faith. One vote will determine whether your children enjoy their full inheritance as American citizens.

God may endow us with “certain unalienable rights,” but whether we enjoy them depends on nine judges—the “priests of the robe” who have the last say in our system of government. Drawing back the curtain of their temple, Senator Cruz reveals the struggles, arguments, and strife that have shaped the fate of those rights. No one who reads One Vote Away can ever again take a single seat on the Supreme Court for granted.