Congress approved the choice of Washington as the new commander in chief, who then read a letter of acceptance. ‘Mr. President, tho’ I am truly sensible of the high honour done me in this appointment, yet I feel distress from the consciousness that my abilities and Military experience may not be equal to the extensive and important Trust,’ he said. ‘However, as the Congress desires, I will enter upon the momentous duty and, exert every power I Possess in their service for the Support of the Glorious Cause…’ He also said he would keep an ‘exact account’ of his expenses and that he would accept no more than that for his service. 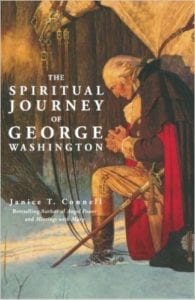 The Spiritual Journey of George Washington by bestselling author Janice T. Connell illumines the rare but supremely brilliant leadership of the first and only unanimously elected President of the United States. George Washington, modest yet elegant, handsome, always projecting strength, graciousness and power, was universally considered the most humble man who ever lived. Born into modest circumstances, he wholeheartedly responded to whatever opportunities life offered him. Self-taught Washington was no stranger to sorrow, cold, hunger, persecution, violence, or terrorism, yet he was at home not only in the wilds of the frontier, but equally so in the finest salons of the times. His singular accomplishment was to face misfortune and conquer it. This greatest of all American heroes achieved startling victory by discipline, commitment, prayer, and the graced ability to bend his will under the yoke of what he called “Kind Providence”. With precision and detail in a rare look at his extraordinary leadership through the prism of George Washington’s interior depths, the author briefly examines: – his boyhood scarred by the early death of his father, – -his life as a young surveyor on the dangerous frontier, – his heroics as a militia leader in the French and Indian War, – his place at the Continental Congress, – his unwanted assignment as Commander-in Chief during the Revolutionary War, – his desolation at Valley Forge, – his silent triumph at the Constitutional Convention, – his simplicity during the heights of his presidency, – his mystical premonitions during his retirement at Mount Vernon – his spiritual and religious circumstances surrounding his sudden death in the darkness of mid-December, 1799. Held in the highest regard by his fellow citizens, history has canonized George Washington as the most esteemed of the Founding Fathers. At the root of that esteem was his deeply private spirituality. The Spiritual Journey of George Washington includes the full text of Washington’s personal prayers (some possibly composed by Washington himself) and Jesuit inspired Rules of Civility by which George Washington conducted himself personally. It also includes the Declaration of Independence by which George Washington became the military leader responsible for carving out a new nation.The book reveals insights concerning military, political and social victories Washington achieved through sincere, humble leadership he perfected using his Bible as a guideline for just behavior in peace and war. Washington went about feeding the hungry, giving drink to the thirsty, clothing and sheltering the needy, visiting the imprisoned, caring for the sick and burying the dead. As General George Washington counseled, instructed, admonished, fought, forgave and prayed for others, he forged a path of national opportunity for American citizens to acquire undreamed of prosperity and abundance. In contemporary times wracked by wars, terrorism, disease, starvation, confusion and tyranny, The Spiritual Journey of George Washington has wisdom for everyone of good will. Washington’s accomplishments and writings disclose that “Kind Providence” truly was in him, around him, and always with him. The book contains excerpts of Washington’s Farewell Address that continues to guide Americans more than two hundred years later. The nurturing light of George Washington’s spirituality is his finest bequest to all people who seek life, liberty and the pursuit of happiness. 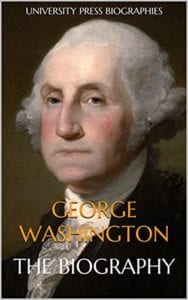 George Washington’s titles included Commander in Chief of the Continental Army and first President of the United States. He was not only a member of the Founding Fathers, he was their leader. Over the years, an aura of the mythic came to surround his life and his deeds. To many Americans, there is no greater hero than George Washington.

The real story of this iconic leader contains more complexity than most legends ever do. Yes, he was a hero in battle, but he was not always successful. He rallied the troops to keep going at Valley Forge despite the harsh conditions they endured. Yet, some of his own men plotted mutiny against him. As a Commander, he called on both bravery and strategy to win the Revolutionary War. And, when the war was done, he chose to resign his commission rather than become the first King of the United States.

Washington grew up in the most privileged class and inherited slaves when he was just 11 years old. Yet, he developed a closeness and compassion for his slaves. The older he got, the more he opposed the country’s system of slavery until he finally freed all his slaves in his will. It may seem facile to free all his slaves after they could no longer do him any good, but he was the only Founding Father to do even that.

Stories of Washington’s life touch on everything from his public deeds to his personal dealings to his most private moments. One well-known story describes how a 6-year-old George Washington displayed honesty, admitting that he chopped down a cherry tree. Another familiar story describes how George threw a silver dollar across the Potomac River. Yet another describes George as a man who wore wooden teeth. These stories are a part of the American culture, but how much truth is in them?

This brief biography is intended to introduce you to some of the most important and intriguing facts about George Washington’s life. When you finish, we encourage you to learn more about this great man and how he changed the world forever. Finally, we hope the example of this great leader inspires you to bravely face your own Valley Forge, intelligently shape your own personal Constitution, and live powerfully to create the world you envision, just as George Washington did throughout his life. Who was this extraordinary figure? Read on, dear reader. 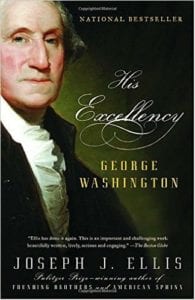 To this landmark biography of our first president, Joseph J. Ellis brings the exacting scholarship, shrewd analysis, and lyric prose that have made him one of the premier historians of the Revolutionary era. Training his lens on a figure who sometimes seems as remote as his effigy on Mount Rushmore, Ellis assesses George Washington as a military and political leader and a man whose “statue-like solidity” concealed volcanic energies and emotions.

Here is the impetuous young officer whose miraculous survival in combat half-convinced him that he could not be killed. Here is the free-spending landowner whose debts to English merchants instilled him with a prickly resentment of imperial power. We see the general who lost more battles than he won and the reluctant president who tried to float above the partisan feuding of his cabinet. His Excellency is a magnificent work, indispensable to an understanding not only of its subject but also of the nation he brought into being.