New York, NY — If ever you feel that the state has your interests in mind when they provide their mandatory “protection” through this system of law enforcement, consider the following scenario which completely negates that idea. When a system lets a pair of rapist police officers go free while locking people in a cage for life for selling a plant—that system does not have your interests in mind.

18-year-old Anna Chambers accused two on-duty NYPD officers of raping her in the back of a police van on the night of September 15th, 2017. As emphatically as she claims she was raped and did not consent to having sex with two police officers, she asserts not only have the police continued to attempt to intimidate her but the very justice system she looked to for help was set up to help the alleged rapists. Then, last month, her claims were proven correct.

Both of the officers, Eddie Martins and Richard Hall had faced up to 25 years in prison on the original rape and kidnapping charges. However, in March, they had all those charges dropped. Because the system is set up in a way to protect predator police officers, the charges were reduced to bribery and official misconduct. Then, in August, despite the Brooklyn district attorney’s ardent opposition to the sweetheart deal, both cops dodged jail time for their crimes.

JFC what does it take to send cops to jail? A 2017 rape kit found these cops’ semen inside her body. Two years later the judge calls a rape a bribery. Infuriating report by @natashalennard https://t.co/MxpFZESCeN https://t.co/U24uQYg3Jy

“These defendants engaged in a shocking abuse of power which they finally acknowledged,” said Brooklyn chief prosecutor Eric Gonzalez, according to the NY Daily News. “While I would have preferred to see them serve prison time, they are no longer members of our police department and with (their) pleas are convicted felons.”

“It’s just outrageous,” said Chambers’ lawyer, Michael David. “It was a clear-cut case. She was kidnapped. There was DNA evidence,” he said.

“You can’t have consent, when you have two cops on duty. These are two cops over six feet, over two hundred pounds.”

“They have guns, they have handcuffs. You can’t have consent under those circumstances.” 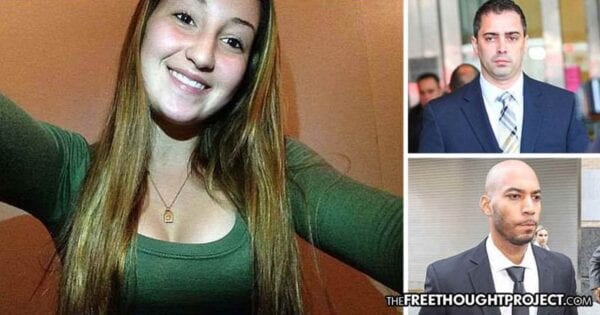 We agree. When armed individuals chain a person’s hands and kidnap them, there is no reasonable manner in which that person could consent to having sex. Even if there was no struggle and the arrested person goes along with police demands, when you are under duress and kidnapped against your will, there is no consenting. This is de facto rape.

Now for the extremely infuriating part of this story. After these officers kidnapped a teen, and raped her in their van, they received not a single day in jail but the people below have never harmed anyone and are rotting away.

Continue at The Free Thought Project