Judges have enormous power. They determine whom we can marry, whether we can own firearms, whether the government can mandate that we buy certain products, and how we define ”personhood.” But who gets to occupy these powerful positions? Up until now, there has been little systematic study of what type of judges get confirmed.

In his rigorous yet readable style, John Lott analyzes both historical accounts and large amounts of data to see how the confirmation process has changed over time. Most importantly, Dumbing Down the Courts shows that intelligence has now become a liability for judicial nominees. With courts taking on an ever greater role in our lives, smarter judges are feared by the opposition. Although presidents want brilliant judges who support their positions, senators of the opposing party increasingly ”Bork” those nominees who would be the most influential judges, subjecting them to humiliating and long confirmations.

The conclusion? The brightest nominees will not end up on the bench.

It’s been over a quarter-century since Robert Bork’s nomination to the Supreme Court became a defining moment in the confirmation of federal judges. Since the distinguished judge and former Yale Law professor was “borked” by demagogic personal attacks and blocked from the Court, confirmation battles have grown uglier and more protracted. John Lott, an economist who has written thought-provoking books on everything from gun control to the federal budget, says the pitched battles over court nominations are having real-world consequences. He argues that our federal courts are being intellectually degraded as politicians in both parties try to keep the brightest and most articulate lawyers from becoming judges. 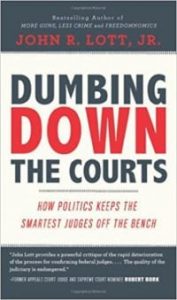 ”Dumbing Down the Courts is a critical read for anyone who seeks to understand the judicial confirmation battles of recent decades. Lott’s meticulous research demonstrates that these contentious battles result from a politicized process in which both activist judges and partisan senators are to blame. When activist judges abandoned their limited, constitutional role and usurped the functions of elected legislators, senators reacted by using political litmus tests in assessing judicial candidates. The surest fix to drawn-out confirmation battles is to ensure that judges adhere to their proper role: to apply the law as it is written.” –Edwin Meese, former U.S. Attorney General

”John Lott provides a powerful critique, amply supported by facts, of the rapid deterioration of the process for confirming federal judges. As courts have become more political and government has grown increasingly intrusive, battles over confirmations have grown more intense and partisan, with the result, Mr. Lott concludes, that the quality of the judiciary is endangered.” –Robert Bork, former U.S. Appeals Court judge and Supreme Court nominee

”This book is a serious effort to identify and grapple with the current problems in our judicial nominations process. Unlike the many partisan works on the subject, John Lott does not lay the blame of our current troubles on one party’s doorstep but demonstrates that there is more than enough fault to go around. Even those who disagree with the author’s conclusions will be well advised to read this excellent book.” —-William P. Marshall, professor, University of North Carolina Law School, and former Deputy White House Counsel to President Clinton 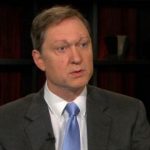 John R. Lott, Jr., has held research and/or teaching positions at the University of Chicago, Yale University, Stanford, UCLA, Wharton, and Rice, and was the chief economist at the United States Sentencing Commission during 1988 and 1989. A FoxNews.com contributor, Lott is the author of eight books, including More Guns, Less Crime and Freedomnomics. He received his Ph.D. in economics from UCLA in 1984.