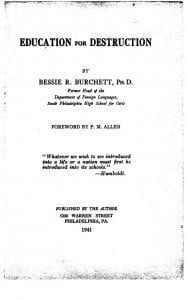 “EDUCATION FOR DESTRUCTION” was written by DR. B.R. BURCHETT and PUBLISHED by her in Philadelphia, Pennsylvania in 1941. She gives us a first hand look at her battle with the beginnings of collectivism, removing God from school, and other agendas carried out by infiltrators of our education system. The promotional flyer for Dr. Burchett’s book read as follows:

The answers to these and other dismaying questions are all found in Education for Destruction.

[A]n eyewitness account by Dr. B.R. Burchett, former Head of Department of Latin in the Philadelphia public school system. It is a fearless and devastating exposé of Communism in America’s schools, its concealed objectives, hidden motives, serpent-like power, and its vicious demoralization of children and adolescents. EVERY parent… EVERY educator… EVERY clergyman should read this book! [emphasis in original]

Here’s some of the shocking revelations beginning with an eye opening Convention in February 1935 of the Department of Superintendence of the National Education Association in Atlantic City, NJ.

Revelations made in 'Education for Destruction'

Dr. Jesse H. Newlon of Teachers College, Columbia, talked about “the sure trend toward collectivism.” He informed us that “only through some form of collective control of the highly integrated economy of the modern world can democracy be realized. The trend towards collectivism is an inevitable conditioning factor, not a choice.”…

A Speaker from the floor declared with fervor that “we control the schools, and public schools are the best avenues of propaganda in the country because practically everyone goes to public school.” Much profanity flew around the room, and some sneers at religion as upholding the “status quo.” Finally, the name of our Lord was used so blasphemously that I felt morally bound to protest. I have protesting ever since.

We find some books advocating absolute freedom of sexual intercourse, with no such thing as marriage, the children of these unions to be cared for by the state. Not only would the father not know his own children, but the mother would not.

Since the ultimate goal of Communism is a world state, it naturally follows that to a communist patriotism instead of being a virtue id a vice. It is easy to understand, therefore, why our Communist controlled schools have refused to foster patriotism.

In my possession is a North American Newspaper Alliance Release by George Sokolsky announcing his arrival to this country. So far as I know, this was not published. It is as follows:

Never Underestimate the Enemy. “It is important to note here that for the first time since the Communist party existed in the United States, it has an able organizer as Secretary. Earl Browder was for a period in China and I had ample opportunities to observe his work there. Under the most trying circumstances, he managed to hold together, and even increase, the strength of an illegal Party whose language he could not speak. Browder is now rebuilding the Communist Party in the United States and he shows mor ability than the noisy agitators on usually associates with the Reds. Everywhere I found evidence of Browder’s organizing capacity.”

Lenin, according to a pamphlet said, “Communism will come to America. The process will be bloody, slow, cruel… But what matters the destruction of 95 percent of the population by executions, if thereby is established the communist state!” To “liquidate” 95 percent of us is rather an ambitious program. To accomplish half of it would be rather drastic.

…at a conference of the Federal Council of Churches about a year ago in Philadelphia some of the speakers said that the barrier which made us unwilling to unite with other nations was our high standard of living; that this standard must be reduced to that of other nations; that our people must be taught (i.e. compelled?) to sacrifice.

We must consider the scheme from another angle: The Streit leaflet informs us that this is “A practical first step toward democratic world government” – we thought so! It is but bait to lure us into the trap of world communism.

Considerable space is devoted to Thomas Paine, the atheist. Karl Marx gets much favorable attention. The recognition of Soviet Russia meets with approval.

The “ideals” are proper production and distribution and world peace. These blessings we are told, can come only through abolition of private property and elimination of all national lines . “Some central authority can lay down and enforce the guiding lines of policy . . . it decides what part of the income of the world society shall go to the expansion . . . of its production, and what part shall go to consumption . . A planned economy… involves absolute control over… consumers’ income potential output.” Here indeed, is a dictatorship od fabulous proportions. We are not given any recipe by which to ensure that this “central authority” shall not enjoy for itself an undue share of the goods produced, nor that the producers shall rest satisfied with the absolute decisions of its authority.

All this fails to answer the question as to why there are over thirty-five books on the senior guide sheet which are violently in favor of communism and not a single one against it or favorable to our Constitutional Republican form of government?

This book contains many more illustrations, examples, quotes, and other first-hand accounts witnessed by Dr. Bessie Burchett in her battle to defeat the communizaton of public schools. You can read or skim through an online PDF of the book HERE.