The Green Mountain Boys  invaded Fort Ticonderoga in New York and under the leadership of Ethan Allen captured the fort from the British. They demanded the surrender of the sleeping British soldiers “in the name of the great Jehovah and the Continental Congress.” With the fort they captured cannons and mortars that were sent to New England where they were used on the heights of Boston Harbor. These cannons and mortars played a big part in forcing the British to leave Boston Harbor. The Green Mountain Boys were able to defend their liberty and the freedom of the American settlers because they had established their right to bear arms and protect themselves.

The Green Mountain Boys were created in southwestern Vermont, and were made up of men from Vermont, Massachusetts, and Connecticut that held land titles from New Hampshire that entitled them land between Lake Champlain and the Connecticut River, which is modern day Vermont. However, the British crown gave all of that land to New York, and ignored the New Hampshire land grants. The group gathered and joined together to keep New York settlers out of Vermont, and keep all the land for people with New Hampshire titles. They drew their name from the Green Mountains of Vermont.

The “Boys” were led by Ethan Allen, his brother Ira, their cousins Seth Warner and Remember Baker. Then by 1770 the group became an armed militia force, and when officials from New York tried to enforce their laws upon them, they failed in doing so and in certain cases were beaten by Green Mountain Boys or their followers.

Once the American Revolution started in 1775 the Green Mountain Boys marched north to attack and later capture the British held fort, Fort Ticonderoga, which was America’s first victory in the

Go to Term Page
" >war. Ethan Allen led the attack with approximately 83 colonist-militia men, and help from Colonel Benedict Arnold. This proved to be very important in the war effort, because it protected northern America and kept the soil safe from invasion from the British through Canada. The Green Mountain Boys also seized Crown Point in New York on Lake Champlain also held by the British, among other battles. Later on the Green Mountain Boys were the basis of the Vermont militia and choose Seth Warner as their leader, however a number of members decided to stay with Ethan and were later captured after a mucked up attack upon Montreal. 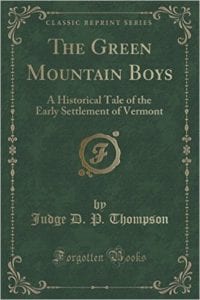 The following pages are intended to embody and illustrate a portion of the more romantic incidents which actually occurred in the early settlements of Vermont, with the use of but little more fiction, than was deemed sufficient to weave them together, and impart to the tissue a connected interest. In doing this, the author has ventured, for the sake of more unity of design, upon one or two anachronisms; or, in other words, he has brought together, or nearly so, some incidents connected with the portions of the two different periods embraced in the work, viz., the New York controversy and the Revolution – which occurred at intervals. Other than this, he is sensible of no violations of historical truth. Without consulting, as perhaps he should, the models to be found in the works of approved writers in this department of literature, he has endeavored to give a true delineation of the manners and feelings of those among whom the scene is laid, together with the deeds and characters of some of the leading actors in the events he has attempted to describe, as gathered from the imperfect published histories of the times, from the private papers to which he has had access, and more particularly from the lips of the few aged relics of that period who actively participated in the wild and stirring scenes which peculiarly marked the settlement of this part of the country. How far he has succeeded in the attempt it is for the public, not for him, to decide.

The Hero of Ticonderoga – or Ethan Allen and his Green Mountain Boys is presented here in a high quality paperback edition. This popular classic work by John De Morgan is in the English language, and may not include graphics or images from the original edition. If you enjoy the works of John De Morgan then we highly recommend this publication for your book collection.