Today the Environmental Working Group announced that strawberries, spinach and leafy greens are again the top offenders on its 2022 Dirty Dozen™ – a list of the most pesticide-contaminated fresh fruits and vegetables, based on the latest tests by the Department of Agriculture and Food and Drug Administration.

Pesticide residues were found on over 70 percent of the non-organic produce tested by the USDA and FDA, continuing a problem highlighted in last year’s report.

The Dirty Dozen and the Clean Fifteen™ are EWG’s lists of the most and least pesticide-contaminated conventionally grown fruits and vegetables, respectively. They are components of the annual Shopper’s Guide to Pesticides in Produce™, a popular report EWG has released since 2004 to help consumers navigate the produce section of their grocery stores. 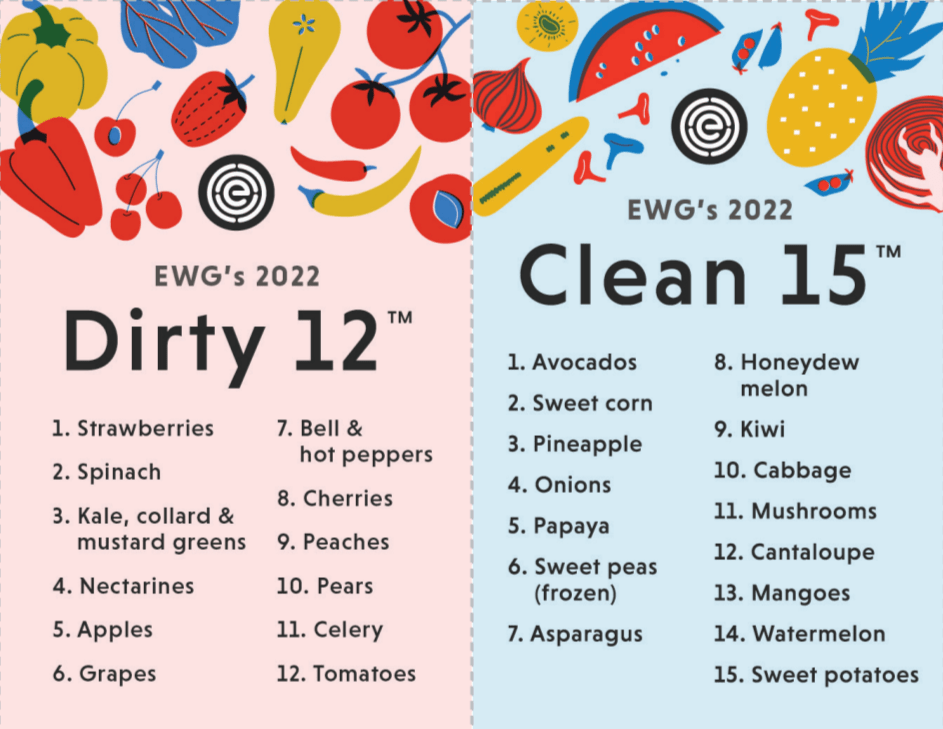 “Everyone should eat plenty of fresh fruit and vegetables, no matter how they’re grown,” said EWG Toxicologist Alexis Temkin, Ph.D. “But shoppers have the right to know what potentially toxic substances are found on these foods, so they can make the best choices for their families, given budgetary and other concerns.”

Before testing fruits and vegetables, the USDA washes, scrubs and peels them as consumers would – so it’s not accurate to say that those concerned about ingesting pesticides should just wash their produce thoroughly.

When organic options are unavailable or unaffordable, EWG advises shoppers to buy produce from its Clean Fifteen. This year, almost 70 percent of Clean Fifteen samples had no detectable pesticide residues whatsoever.

Legal does not mean safe

For the more than 70 percent of non-organic produce with detectable pesticides, nearly all of the levels fall under the legal limits allowed by government regulations.

But legal does not always mean safe.

Pesticides are toxic by design. Although they’re meant to kill pests such as insects, weeds and fungi, many pesticides are also linked to serious human health issues, including hormone disruption, brain and nervous system toxicity, and cancer.

Recent research from Harvard University shows that consuming fruits and vegetables with high levels of pesticide residues may offset the protections eating such foods normally provides against cardiovascular disease and mortality.

Babies and children are particularly vulnerable to many of the health harms associated with pesticide exposure. Research published by EWG in 2020 found that the Environmental Protection Agency, which oversees pesticide safety, is failing to adequately consider children in setting legal limits for 90 percent of the most common pesticides.

The threats pesticides pose to children’s health have been known since at least 1993, when the National Academies of Science published a landmark study warning of inadequate oversight. The American Academy of Pediatrics recommends parents concerned about their children’s exposure to pesticides consult EWG’s Shopper’s Guide.

One particularly dangerous pesticide is chlorpyrifos, which scientists have definitively linked to brain damage in children and fetuses. EWG and other public health advocacy organizations have spent more than a decade urging the Environmental Protection Agency to prohibit chlorpyrifos from being applied to food crops.

For decades, chlorpyrifos was used on many fruits and vegetables, while the conventional agriculture and pesticide industries repeatedly downplayed the dangers it poses to both children and farmworkers.

In 2021, the EPA finally banned all uses of chlorpyrifos on crops grown for food. In a last-ditch unsuccessful effort to keep the neurotoxic pesticide legal for use on fruits and vegetables, several groups representing conventional growers sought to block the ban. They included the American Farm Bureau Federation, the American Soybean Association, the Cherry Marketing Institute and the United Fresh Produce Association – one of the big agribusiness outfits that consistently attacks EWG for publishing its Shopper’s Guide and informing the public about the presence of chlorpyrifos and other pesticides on produce.

EWG’s 2022 Shopper’s Guide combines data from USDA and FDA tests from between 2002 and 2020. The newest data released by the agencies included results of tests of nearly 45,000 samples of produce. The USDA does not test every fruit and vegetable every year, nor does it test produce for all pesticides used on the market.