FDIC Chairman Jelena McWilliams announced her resignation on Friday after warning that Democrats had launched a “hostile takeover” of the agency.

McWilliams resigned in an open letter addressed to President Biden.

McWilliams was appointed to the position in 2018 by President Donald Trump.

“When I immigrated to this country 30 years ago, I did so with a firm belief in the American system of government. During my tenure at the Federal Reserve Board of Governors, the United States Senate, and the FDIC, I have developed a deep appreciation for these venerable institutions and their traditions. It has been a tremendous honor to serve this nation, and I did not take a single day for granted. Throughout my public service, I have been constantly reminded how blessed we are to live in the United States of America,” the letter stated.

In December, McWilliams published an op-ed in the Wall Street Journal titled, “A Hostile Takeover of the FDIC.” 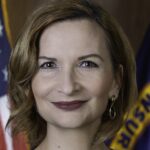 This conflict isn’t about bank mergers. If it were, board members would have been willing to work with me and the FDIC staff rather than attempt a hostile takeover of the FDIC internal processes, staff and board agenda.”

McWilliams’ resignation will go into effect on February 4.