On Jun. 05, 1909, about 650 newspapermen from throughout the British Empire and America were brought to London, paid for by Burroughs Wellcome & Co. (now named GlaxoSmithKline), for an all-hands-on deck meeting to consolidate editorial control of the Empire by the British Pilgrims Society. 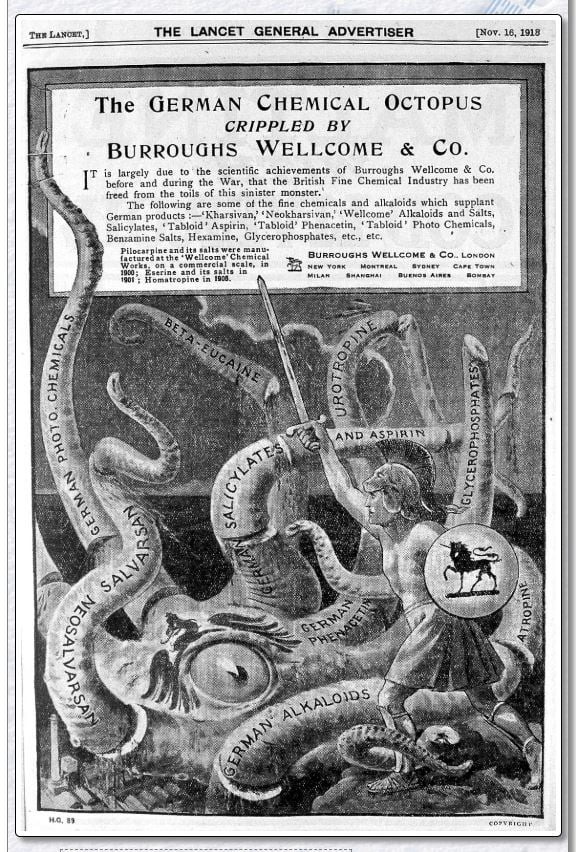 Henry Wellcome, like a carnival barker of snake oil, heavily pushed his pharmaceutical vaccines, many totally experimental, like non-existent acne vaccines, and medicine chests at the conference… to newspapermen!

The strategist leaders of the Pilgrims Society, William Thomas (“W.T.”) Stead and his protégé MP Philip Whitwell Wilson busily promoted “Government by Journalism” whereby the press would take over government of nations—hence the name of the conference, A Parliament of the Press.

Banker N.M. Rothschild and his chief stockholder-relative, former prime minister Lord Rosebery, hovered over the conference like cackling hens. Indeed, with control over world newspapers, they could, using their terms, “create public opinion” and steer the public like bulls with a nose ring.

The conference focused on using emerging wireless telegraphy technology stolen from Nikola Tesla and handed to their cutout, Guglielmo Marconi, to create a single global news feed that would control British propaganda in a ubiquitous blanket of lies.

The records of the conference almost disappeared from history. Most historians are either completely silent, or, if mentioned at all, minimize it as inconsequential. No one linked to source documents. For example, Georgetown historian Carroll Quigley makes no mention of this tyrannical conference in Anglo-American Establishment.

THESE DOCUMENTS ARE HARD EVIDENCE OF PERHAPS THE MOST EXPANSIVE CONSPIRACY IN WORLD HISTORY.

The relatives of almost all the principals of this conference benefited from this insider game and continue to terrorize the world today in using their control of propaganda to push “The Great Reset.”

Out of that conference came the Empire Press Union by its many surrogate names including Associated Press, Reuters, UPI, BBC, CNN—the source for one-world propaganda for the British Empire), MI6, MI5 and GC&CS renamed GCHQ, as well as the seeds for the FBI (ordered by Pilgrims Attorney General Harlan F. Stone to be modeled after Scotland Yard in 1924), C.I.A. and NSA. American intelligence has ALWAYS been a mere branch of British intelligence since Jul. 29, 1909 and William J. Donovan’s employment by the Rockefeller Foundation and J.P. Morgan.