Without anything that can be called a serious investigation, local authorities in a wealthy Houston suburb whitewashed the death of former Enron vice chairman J. Clifford Baxter, calling it a suicide. Baxter, 43, was found shot to death in his Mercedes Benz in the early hours of Friday morning, January 25, near his home in Sugar Land, Texas.

Baxter’s body was discovered inside his Mercedes Benz, which was parked in a turnaround on a street near his home. Officials in Sugar Land moved swiftly to label Baxter’s death a suicide. Local Justice of the Peace Jim Richard initially declared that Baxter died of a self-inflicted gunshot wound and no further inquiry was required. But within hours he reversed himself, citing the intense public interest in the death, and ordered an autopsy.

Harris County Medical Examiner Joye Carter conducted the autopsy and found the cause of death to be suicide by a “penetrating gunshot to the head.” The weapon was a .38 caliber revolver which was found in Baxter’s car, next to his body.

Dr. Carter has a controversial past, an ENQUIRER investigation reveals. In 1993 she was the District of Columbia Chief Medical Examiner when Washington lawyer Paul David Wilcher was mysteriously found dead in his apartment. Wilcher had been investigating the events leading up to the Branch Davidian fire in Waco, Texas. But no cause of death was ever determined and autopsy reports were never made public. In February 2001 Carter was fined $1,000 and narrowly escaped being fired for allowing an unlicensed pathologist to perform roughly 200 autopsies in the Houston area. And during her time in Houston, the county has paid hefty damages in two lawsuits brought by whistle-blowers on her staff who alleged official mis-conduct.

It was murder. That’s the stunning verdict of top law enforcement experts who independently examined the shooting death of Enron executive Cliff Baxter, which was hurriedly ruled a suicide by a controversial medical examiner. And insiders believe the popular boss’ tragic death is linked to the giant energy company whose shoddy dealings and bankruptcy have shattered the lives of thousands of employees. “Mr. Baxter’s death was NOT a suicide-and nothing points to a natural death, which leads to the unavoidable conclusion that foul play was involved,” said Peter Levin, a veteran prosecutor in Philadelphia.

Neither the perfunctory official probe nor the media coverage addressed the obvious suspicions aroused by the death of a critically important witness in the investigation into the criminal activities at Enron, claimed to be the biggest corporate fraud in American history. Baxter quit as vice chairman of the company last May, after reportedly come into conflict with other top executives over the phony accounting gimmicks allegedly used to plunder billions of dollars.

The most disturbing account of Baxter’s last days comes from a former business associate who spoke to the New York Times but was not identified by the newspaper. This person spoke with the former Enron vice chairman two days before his death and congratulated him “for being named among those people who complained about Enron.”

According to the Times account, the unnamed associate added that Baxter “was talking about perhaps needing a bodyguard, though I’m not sure where that idea came from.”

Baxter was named in a memorandum submitted by Enron Vice President Sheron Watkins in August 2001 to Chairman and CEO Kenneth Lay. Watkins warned Lay that dubious off-the-books transactions with private partnerships set up by top Enron officials might cause the company to “collapse in a welter of accounting scandals.” She cited Baxter’s opposition to one of these partnerships, set up by then-CEO Jeffrey Skilling, writing, “Cliff Baxter complained mightily to Skilling and all who would listen about the inappropriateness of our transactions with LJM.”

Baxter received a subpoena from the Senate Government Affairs Subcommittee on Permanent Oversight and Investigation, along with 48 other people linked to Enron and Andersen. Investigators from the House Energy and Commerce Committee had told Baxter’s lawyer that they wished to interview him, but had not yet issued a subpoena.

Representative James C. Greenwood, Republican of Pennsylvania and chairman of the committee’s Oversight and Investigations Subcommittee, said, “It seemed to us that he was a pretty highly placed insider at Enron who had understood exactly what was wrong there.”

The circumstances of Baxter’s life cast doubt on the verdict of suicide. He is not known to have been suffering from depression or any other mental health problem. He was a multimillionaire, having netted $30 million from the sale of his stock in the company before and after his departure from Enron last May. His family life was apparently happy, and he leaves a wife and two children, a 16-year-old son and 11-year-old daughter.

Far from being the target of media vilification, Baxter’s name had been linked to the Enron affair in a way that was largely favorable. His first appearance in the coverage of Enron came when the Watkins memo was made public, presenting him as an opponent of corporate fraud.

Friends and business associates interviewed by the press expressed shock and surprise at his reported suicide, although there were conflicting accounts of his state of mind after the bankruptcy of Enron.

An executive of Portland Gas & Electric, a subsidiary which Enron acquired in a takeover organized by Baxter, told the New York Times: “My impression of Cliff Baxter was that this was an enormously confident guy who came up here to get the thing done, and he did. The image I had of him at the time is totally at odds with the tragedy today. I mean, he was self assured, he was very friendly. This was practically the last person in the world you’d ever expect to commit suicide.”

“The evidence for foul play is pretty strong. Here’s a man who had everything to live for-children he loved and a comfortable future. He’s lying in bed in the middle of the night when he suddenly gets up, dresses, gets into his car, drives a short distance and blows his brains out. It doesn’t make sense. 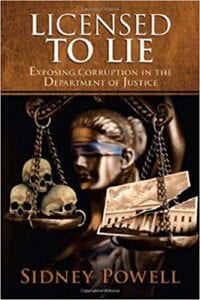 A tragic suicide, a likely murder, wrongful imprisonment, and gripping courtroom scenes draw readers into this compelling story giving them a frightening perspective on justice corrupted and who should be accountable when evidence is withheld. Licensed to Lie: Exposing Corruption in the Department of Justice is the true story of the strong-arm, illegal, and unethical tactics used by headline-grabbing federal prosecutors in their narcissistic pursuit of power. Its scope reaches from the US Department of Justice to the US Senate, the FBI, and the White House. This true story is a scathing attack on corrupt prosecutors, the judges who turned a blind eye to these injustices, and the president who has promoted them to powerful political positions.