FOX News released a poll where they state that 49% of Americans are for Trump Impeachment.  But their polling was faulty.  The real extrapolated results of the poll using an accurate proportion of Republicans, Democrats and Independents shows that only 30% are in favor of Trump’s Impeachment and their all Democrats.

After four weeks of non stop lies and leaks all against the President, Republicans and Independents are not buying it.  70% of Americans are against impeachment according to the extrapolated and more accurate results of the FOX News survey.

Ann Coulter in her great best seller from now nearly 20 years ago titled “Slander” pointed out how liberals always slander polling results through bogus sample sizes and leading questions.  This is exactly what the FOX News poll did.

The Democrats and their media understand that they must continue to lie to the American public or be found out.

The fake news media knows who the Schiff Anti-Trump leaker is — They just don’t want to report it because it will ruin their narrative in the impeachment investigation.  The Democrat media knows the truth will destroy them.

So the headline SHOULD BE that Republicans and Independents overwhelmingly reject the Democrats’ sham impeachment process.

What a horrible piece of propaganda!

I refuse to watch Fox news tonight with idiot Chris Wallace. He starts off with a phony pole. I have never been called on any pole from Fox! He is another RINO! Have any of my followers ever been called by Fox news?

Trump wins in the “Pocketbook Model” 351 to 187 electoral votes. 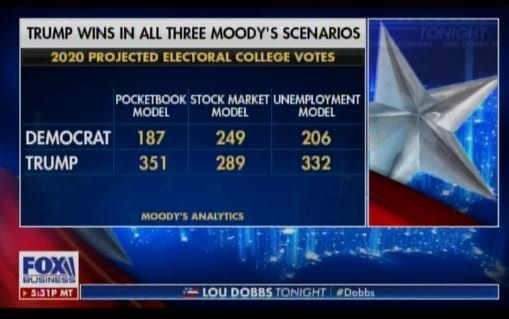 And Yale and Oxford have joined Moody’s in predicting a huge Trump win in 2020.

Via Varney and Co.