This document, approved by the National Assembly, codifies the ideals of the French Revolution, strongly influenced by those of the Enlightenment and the American Revolution. The Marquis de Lafayette, with help from Thomas Jefferson, drafted the declaration that would become the preamble of the republic’s 1791 constitution.

The basic principle of the Declaration was that all “men are born and remain free and equal in rights” (Article 1), which were specified as the rights of liberty, private property, the inviolability of the person, and resistance to oppression (Article 2). The Declaration of the Rights of Man and of the Citizen, passed by France’s National Constituent Assembly in August 1789, is a fundamental document of the French Revolution that granted civil rights to some commoners, although it excluded a significant segment of the French population.

The Declaration of the Rights of Man and of the Citizen (French: La Déclaration des droits de l’Homme et du citoyen) is one of the most important papers of the French Revolution. This paper explains a list of rights, such as freedom of religion, freedom of speech, freedom of assembly and separation of powers.

The Declaration was intended to serve as a preamble to the French Constitution of 1791, which established a constitutional monarchy. (A purely republican form of government awaited the Constitution of 1793, after the treason conviction of Louis XVI had led to his execution and the abolition of monarchy.)

According to the declaration, liberty consists in the freedom to do everything which injures no one else; hence the exercise of the natural rights of each man has no limits except those which assure to the other members of the society the enjoyment of the same rights. These limits can only be determined by law. 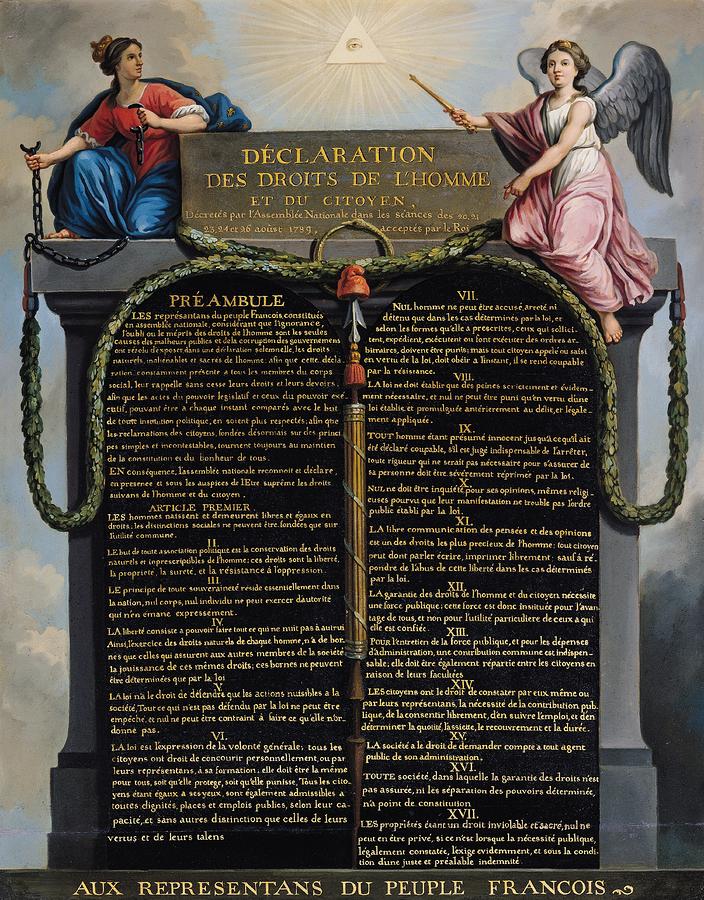 Declaration of the Rights of Man and Citizen

Approved by the National Assembly of France

The representatives of the French people, organized as a National Assembly, believing that the ignorance, neglect, or contempt of the rights of man are the sole cause of public calamities and of the corruption of governments, have determined to set forth in a solemn declaration the natural, unalienable, and sacred rights of man, in order that this declaration, being constantly before all the members of the Social body, shall remind them continually of their rights and duties; in order that the acts of the legislative
power, as well as those of the executive power, may be compared at any moment with the objects and purposes of all political institutions and may thus be more respected, and, lastly, in order that the grievances of the citizens, based hereafter upon simple and incontestable principles, shall tend to the maintenance of the constitution and redound to the happiness of all. Therefore the National Assembly recognizes and proclaims, in the presence and under the auspices of the Supreme Being, the following rights of man and of the citizen: