General William Livingston made a resolution to Congress which passed without dissent: “We earnestly recommend that Friday, the 17th day of May be observed by the colonies as a day of humiliation, fasting, and prayer, that we may with united hearts confess and bewail our manifold sins and transgressions … and by a sincere repentance … appease God’s righteous displeasure, and through the merits and mediation of Jesus Christ obtain His pardon and forgiveness.”

In times of impending calamity and distress; when the liberties of America are imminently endangered by the secret machinations and open assaults of an insidious and vindictive administration, it becomes the indispensable duty of these hitherto free and happy colonies, with true penitence of heart, and the most reverent devotion, publickly to acknowledge the over ruling providence of God; to confess and deplore our offences against him; and to supplicate his interposition for averting the threatened danger, and prospering our strenuous efforts in the cause of freedom, virtue, and posterity.

The Congress, therefore, considering the warlike preparations of the British Ministry to subvert our invaluable rights and priviledges, and to reduce us by fire and sword, by the savages of the wilderness, and our own domestics, to the most abject and ignominious bondage: Desirous, at the same time, to have people of all ranks and degrees duly impressed with a solemn sense of God’s superintending providence, and of their duty, devoutly to rely, in all their lawful enterprizes, on his aid and direction, Do earnestly recommend, that Friday, the Seventeenth day of May next, be observed by the said colonies as a day of humiliation, fasting, and prayer; that we may, with united hearts, confess and bewail our manifold sins and transgressions, and, by a sincere repentance and amendment of life, appease his righteous displeasure, and, through the merits and mediation of Jesus Christ, obtain his pardon and forgiveness; humbly imploring his assistance to frustrate the cruel purposes of our unnatural enemies; and by inclining their hearts to justice and benevolence, prevent the further effusion of kindred blood.

But if, continuing deaf to the voice of reason and humanity, and inflexibly bent, on desolation and war, they constrain us to repel their hostile invasions by open resistance, that it may please the Lord of Hosts, the God of Armies, to animate our officers and soldiers with invincible fortitude, to guard and protect them in the day of battle, and to crown the continental arms, by sea and land, with victory and success: Earnestly beseeching him to bless our civil rulers, and the representatives of the people, in their several assemblies and conventions; to preserve and strengthen their union, to inspire them with an ardent, disinterested love of their country; to give wisdom and stability to their counsels; and direct them to the most efficacious measures for establishing the rights of America on the most honourable and permanent basis – That he would be graciously pleased to bless all his people in these colonies with health and plenty, and grant that a spirit of incorruptible patriotism, and of pure undefiled religion, may universally prevail; and this continent be speedily restored to the blessings of peace and liberty, and enabled to transmit them inviolate to the latest posterity.

And it is recommended to Christians of all denominations, to assemble for public worship, and abstain from servile labour on the said day.

Resolved, That the foregoing resolve be published. 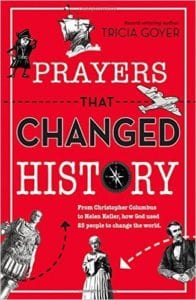 One prayer can change everything, says bestselling author Tricia Goyer in Prayers That Changed History.

Martin Luther. Sojourner Truth. Helen Keller. St. Patrick. We read their stories, and of other people like them, in history books and hear about the amazing things they did to change the world. But one part of the story is often left out: Each one of them wouldn’t have accomplished what they did without prayer.

In Prayers That Changed History, the stories of twenty-five notable people are presented along with how prayer changed their lives and changed history. Following each historical example is a biblical story that ties to that person’s life and actions, as well as ways you can use the power of prayer in your life as well. Because God isn’t done changing the world yet, and he would love to use you to make history.

Includes images of each historical figure. 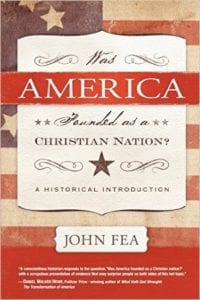 Fea offers an even-handed primer on whether America was founded to be a Christian nation, as many evangelicals assert, or a secular state, as others contend. He approaches the title’s question from a historical perspective, helping readers see past the emotional rhetoric of today to the recorded facts of our past. Readers on both sides of the issues will appreciate that this book occupies a middle ground, noting the good points and the less-nuanced arguments of both sides and leading us always back to the primary sources that our shared American history comprises.