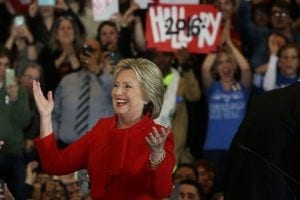 In what could likely be the use of a weighted coin, knowing Hillary Clinton’s past record of lying and cheating, she does the improbable to win six delegates and ultimately wins the important state of Iowa.

DES MOINES, Iowa — One of the most bizarre details to emerge from Monday’s Iowa caucuses was that in six Democratic counties, the ownership of six delegates was decided by a coin flip.
A single delegate remained unassigned at the end of caucusing in two precincts in Des Moines, one precinct in Ames, one in Newton, one in West Branch and one in Davenport, The Des Moines Register reported.

In all six instances, the coin toss was won by former Secretary of State Hillary Clinton over Vermont Sen. Bernie Sanders.
There may have been more coin tosses, but those are the ones we know about for now.

Now, get ready to do some math. 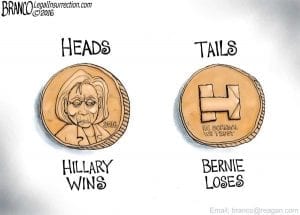 In a single coin toss, the probability of calling the toss correctly is 50 percent, or one in two. Heads or tails.

But the probably of winning every flip out of six flips is one in 64, or 1.56 percent.
The online study tool “Coin Toss Probability Calculator” has a really intense formula that explains why, but the bottom line is, the probabilities stack on each other. 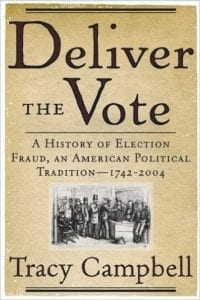 If elections are the lifeblood of democracy, then the United States is a sorely ailing body politic. From ballot stuffing and intimidating voters to suppressing turnout, buying votes, and manipulating returns, Deliver the Vote is an intensive examination of the corrupt underbelly of American politics. Drawing on records of hundreds of elections from the pre-colonial era through the 2004 election, historian Tracy Campbell reveals how a persistent culture of corruption has long thrived in local, state, and national elections. Among the public figures whose stories are central to his chronicle are Boss Tweed, William Randolph Hearst, Huey Long, Harry Truman, Lyndon Johnson, Jimmy Carter, and George W. Bush, as well as countless local and state politicians of all parties. Our elections are often held up as the model for the world’s budding democracies to emulate. But after two of the most bitterly contested presidential elections in American history, this book shows how our democratic house has never been in proper order. Using a candid appraisal of our history as a guide, Deliver the Vote offers some surprising suggestions for a demoralized electorate to reclaim its democratic birthright.

1 year ago
In a day when half the US population remained transfixed by the ongoing revelations about the contents of Hunter Biden’s “laptop from hell” and the other half was doing everything in its power to ignore the news which the socials have conveniently been desperate to censor, a far less noticed but perhaps just as important investigative report authored by the unknown Typhoon Investigations, was released by Christopher Balding, Associate Professor at Peking University HSBC School of Business Shenzhen, China and also Bloomberg contributor  (which is odd considering the clear anti-Trump bias of the Bloomberg … Read More

1 year ago
(ZeroHedge) Nearly two decades following 9/11 and the initial invasion of Afghanistan which ostensibly had as its objective the removal and destruction of the hardline Islamist Taliban government, the United States military is providing covert support to the same “outlawed” Taliban with the latest aim of booting ISIS from the country. A report in The Washington Post on Thursday details that this secret assistance focuses on the Pentagon providing air power to the Taliban as the group wars against against ISIS in Afghanistan’s northeastern Kunar Province. That’s right, the very terrorist group that for … Read More

1 year ago
President Trump trounced Joe Biden during their final debate Thursday night in Nashville, Tennessee. It wasn’t even close. Biden was looking at his watch because he couldn’t wait to get the hell out of the ring (I’m also told the debate took place in the middle of a Matlock marathon.) I was looking at my watch because I didn’t want it to end. A quick word on the muting the microphones… You put boundaries around a filmmaker like Michael Cimino, you get classics like Thunderbolt and Lightfoot and the Deer Hunter. You … Read More

1 year ago
A deposition detailing the seamy relationship between Ghislaine Maxwell and the late pedophile Jeffrey Epstein was released Thursday just before a court-imposed deadline, after months of wrangling by her defense lawyers to keep the sordid documents from the public eye. The newly unsealed transcript is from Maxwell’s seven-hour deposition in April 2016 and includes hundreds of denials from the British socialite, who said she knew nothing of Epstein’s alleged abuse of underage girls. It also includes pointed questions from Giuffre’s lawyer about her sex life, as well as her ties to … Read More

1 year ago
The Center for Disease Control has redefined what counts as “close contact” with a COVID-19 patient. The CDC released the updated guidelines on Wednesday, noting people should quarantine if they have multiple close encounters with an infected person amounting to 15 minutes in one day. The update came after a Vermont prison employee caught COVID-19 from inmates after having a number of brief encounters with them, which amounted to 17 minutes. CDC Director Dr. Robert Redfield said the change falls in line with new scientific data. “There is some recent … Read More

1 year ago
(The Gateway Pundit) Far left operatives created the Donald Trump Watch website recently to reveal local Trump donors in your community. Users are able to punch in the address of any location in the country and a map will show you the name and address of any Trump donor in the area. The website is using FEC data to target Trump voters and donors. According to the website they provide the names and addresses of “Americans who Give Money to Support a Racist.” The website claims it is a privately owned … Read More

1 year ago
(Breitbart) A whistleblower CEO and Biden insider, Tony Bobulinski, released a public statement on Wednesday evening backing up the reporting of the New York Post from last week and claiming that he personally witnessed Democrat presidential nominee former Vice President Joe Biden discussing business deals with his son, Hunter Biden. Sources familiar with the matter told Breitbart News that Bobulinski is the person whose allegations and inside information are the centerpiece of a forthcoming investigation by the Wall Street Journal. That Wall Street Journal story has not published yet, several days after the … Read More