The terrible dawn of Norwegian black metal came during the summer of 1984, during an adolescent season of inspiration in a small village outside Oslo.

Guitarist Oystein Aarseth and bassist Jorn Stubberud, both 16, formed a band called Mayhem, fueled on their love for the bleakest forms of heavy metal, slasher films and an attraction to rebellion and evil. To signify their break from mainstream Christian society — and in opposition to the glam-metal dudes in hairspray and spandex — the Mayhem founders took on ominous new identities: Aarseth would be known as “Euronymous,” Stubberud as “Necrobutcher.”

“That’s why we started to wear our hair all black. We were singing about Satan and sadism, and everything that was wrong like torture and stuff like that — the opposite of hanging around at the beach,” Necrobutcher, now 50, recalled of those days. “We were looking for perversity and craziness.”

They found it in their creation of a frantic metal subgenre that was uniquely grim and threatening, just as Mayhem and others in the Norwegian black metal scene began to stumble from a frightening made-up image and into tragic reality. Within a decade, bandleader Euronymous was murdered by another band member, and a Mayhem singer was dead from suicide. Others were sent to prison for murder and dozens of churches across the country had been burned to the ground by band members and black metallers inspired by their example.

It remains one the most notorious and disturbing stories from the rock ‘n’ roll underground, the subject of multiple books and documentaries. Now a stark new feature film, “Lords of Chaos,” has taken on this real-life cautionary tale of youthful excitement and genuine horror.

The film, which comes out Thursday (2/14/2019), was directed by Swedish filmmaker Jonas Akerlund, who’s uniquely suited to tell this story with real empathy and dark humor. Before he was an award-winning director of features, commercials and music videos for Madonna, U2 and Lady Gaga, Akerlund was the founding drummer for Bathory, a Swedish metal act that was a key influence on Norwegian black metal.

He knew musicians from that scene and was mutual friends with many more. In “Lords of Chaos,” the result is that these young Scandinavians are not the tabloid villains they became in the ’90s but are depicted more in the tradition of Larry Clark’s “Kids” or “Bully,” or Tim Hunter’s grim 1986 teen drama “River’s Edge” — unromanticized stories of young adults dangerously close to self-destruction.

When the director met with surviving families and wary band members in preparation for the film, he told them, “This is the first document of these young boys that humanizes them and shows they were young and they were kids like any of our kids — and it went wrong, obviously.”

For actor Rory Culkin, who plays the doomed impresario Euronymous, the lines between fantasy and reality were comically, horrifically blurred.

“These kids were killing people and burning churches, but then they were also doing photo shoots in cemeteries, trying to look scary,” said Culkin, 29. “Euronymous was playing a part and playing the game, and then people took to it and thought he was for real.” 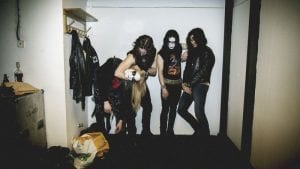 Ahead of the tragic events to come, a party scene early in “Lords of Chaos” finds a delirious crowd in denim and black leather at the Mayhem house, blasting Dio’s “Stand Up and Shout” on the stereo to a frenzy of headbanging, fire-breathing, random sex and projectile vomiting.

Now 53, Akerlund still looks the part in black clothes and long black hair on a recent visit to Los Angeles, where he keeps a home. His fingernails are painted black, and he wears a prominent skull ring on his right hand.

“Lords of Chaos” is based on a 1997 book of the same name, plus Akerlund’s firsthand knowledge of that first black metal generation and subsequent research: watching and reading old interviews, studying photos and police reports.

At the center of the story is Euronymous. The young guitarist led Mayhem and ran a record shop in Oslo called Helvete (translation: “Hell”) and owned the record label Deathlike Silence Productions. His immediate crowd of friends and collaborators was known loosely as “the black circle.”

He was a shameless promoter of the band and exaggerator of evil intent. In one “Lords of Chaos” scene, Euronymous informs a young female photographer (Sky Ferreira): “We don’t want any … groupies. We’re into destruction and suffering. When people hear our music, we want them to commit suicide.”

The band’s trajectory took a dark turn after the arrival of Per Yngve Ohlin (a.k.a. “Pelle”), a gifted metal singer and lyricist from Sweden obsessed with death, particularly his own. He renamed himself Dead and brought a startling level of brutal theatricality to the band, slicing his arm with a knife to drip blood on the front rows and tossing severed pigs heads into the crowd.

“The lyrics that he wrote for us were so deep and so personal and so heartbreaking and everything at the same time,” Necrobutcher recalled of Dead. “Beautiful, dark, great, all the emotions are in there. He was a true genius, that guy.”

Mayhem was preparing to record its first studio album when Dead, 22, killed himself with a knife and shotgun in 1991. Euronymous found his body, but before alerting police, he took several grotesque snapshots of the death scene. He planned to use the photos to add further mystique to the Mayhem name.

Continue Reading at the LA Times