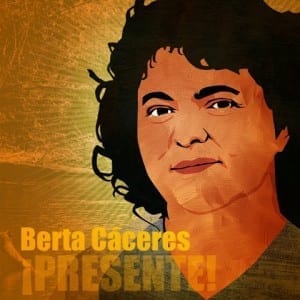 Killed while sleeping in her home in La Esperanza, Honduras. Berta Caceres had named Hillary Clinton as responsible for the Honduran coup which toppled democratically elected President Manuel Zelaya. Since the coup, Honduras has become one of the most violent places in the world. Growing awareness of Hillary’s role in Honduras became a serious liability during Hillary’s 2016 campaign.

(The Guardian) Honduran authorities have arrested a former military intelligence officer for masterminding the murder of the indigenous leader Berta Cáceres, who was shot dead exactly two years ago today.

David Castillo Mejía, the executive president of the company building a dam which Cáceres campaigned against, is the ninth person arrested for the murder, and the fourth with ties to the Honduran military.

Castillo Mejía is accused by arresting authorities of providing logistical support and other resources to one of the hitmen already charged.

He is the first person to be charged as being the “intellectual author” of Cáceres’s murder and the attempted murder of Mexican environmentalist Gustavo Castro.

Cáceres was shot in her bedroom just before midnight on 2 March 2016, a year after winning the prestigious Goldman Prize for leading a campaign against the Agua Zarca dam on the Gualcarque river considered sacred by the indigenous Lenca community.

The dam was licensed to the company Desarrollos Energéticos SA (Desa) without the legally required community consultation.

Cáceres had led a campaign of peaceful community resistance against the dam which triggered a wave of repression including smear campaigns, violent evictions, sexual harassment, false criminal charges, and ultimately her murder.

Before her death, Cáceres had said that she was scared of Castillo Mejía because of his military intelligence background. She told close friends and family that Castillo Mejía hounded her with texts, phone calls, and in person, appearing without warning at her home, work events and even the airport.

He was arrested at San Pedro Sula international aiport trying to leave the country, the public ministry confirmed in a tweet alongside a photo of Castillo Mejía in custody.

ABC News reports in “Hillary Clinton’s Cinco de Mayo LA Rally Anything but Festive Due to Protesters,” that: “Clinton was confronted on the rope line by a protester who was quickly surrounded by police and taken out. And during her remarks, one woman, who appeared to be protesting Clinton’s role in the 2009 coup in Honduras, shouted loudly, ‘She killed Berta! She killed Berta!’ — referring to Berta Cáceres, a Honduran environmental activist and indigenous leader, who called out Clinton for her role in the coup, before being assassinated in March. As this was happening, Clinton supporters countered with chants of ‘Hillary! Hillary!’”

See by Greg Grandin: “Before Her Murder, Berta Cáceres Singled Out Hillary Clinton for Criticism,” which states: “Before her murder on March 3, Berta Cáceres, a Honduran indigenous rights and environmental activist, named Hillary Clinton, holding her responsible for legitimating the 2009 coup. ‘We warned that this would be very dangerous,’ she said, referring to Clinton’s effort to impose elections that would consolidate the power of murderers.

“In a video interview given in Buenos Aires in 2014, Cáceres says it was Clinton who helped legitimate and institutionalize the coup.” Grandin is a Pulitzer Prize finalist and professor of history at New York University.

Grandin’s most recent piece for The Nation is “Berta Cáceres’s Killers Are Getting Good at the PR Game,” which states: “Four men have been arrested in Honduras for the killing of Berta Cáceres — two of them associated with the company building the dam she was fighting to stop.”

Silvio Carrillo is the nephew of Berta Cáceres. He runs the website bertacaceres.org, which features a recent statement from the family. Clinton is speaking in Oakland today where Carrillo lives.

He said today: “It’s good that the Honduran government at least hasn’t arrested COPINH [the environmental group Cáceres worked with] members. That’s where they were going at first. A colleague of Berta’s — who was shot twice in the attack that killed her — was held for 36 hours.

“There is a 96 percent impunity rate in Honduras. There’s no way we can trust this process, it’s totally corrupt. We need an independent international investigation, like the one for the 43 slain Mexican students. That’s what we and 59 members of the U.S. Congress have called for. [PDF]

“We’re learning things about this current ‘investigation’ through leaks to a newspaper that backed the coup, owned by one of the oligarchs. This is being done by a government pretending to be legitimate, but the government may well have had a hand in the assassination and are ultimately not going to finger their own.

“It’s certainly right that Hillary Clinton is a flashpoint for this, but this is a much larger problem. The State Department has been doing this for decades. But she could have changed the paradigm when she came in as Secretary of State.

“Manuel Zelaya — the Honduran president who was ousted in 2009 — was working with my aunt. Since then, 110 environmental activists — just environmental, not counting labor activists, journalists and others — have been killed. The rich in Honduras who control the country just care about enriching themselves — and Clinton seemed to be happy to work with them.”