In this controversial lithograph, which was to be published in Charles Philipon’s newspaper La Caricature on December 16, 1831, Daumier depicted the corpulent monarch Louis-Philippe seated on a throne, gobbling bags of coins being hauled up a ramp by tiny laborers, the coins having been wrung from the poor of France by his ministers. On the lower right, a crowd of his poverty-stricken subjects stand waiting miserably to turn over what little money they have. Milling around the throne are Louis-Philippe’s favorites, also extravagantly fat; they are collecting commissions, decorations, and so forth that are the result of the compulsory offerings of the poor.

The title, Gargantua, explains Brandeis University, “was actually referring to the incredible amounts of money the French government spent on itself. Louis-Philippe allowed himself a ‘salary’ of more than 18 million francs, which was 37 times more than Napoleon Bonaparte or almost 150 times the amount the American President received.” Further, that outrageous salary was paid him on top of the regular income he was given to maintain the castles he owned. All the while, the majority of the population was living in dire poverty.

While the scathing image was meant to run in the December 16, 1831 publication of La Caricature, the police along with government’s censor halted the printing. An article appeared instead, criticizing the Court’s decision to censor the cartoon. The publisher and artist were both tried in Court in February 1832; each man fined 500 francs plus legal fees and pleaded guilty. All three were sentenced to six months in Sainte-Pélagie prison. Shortly afterwards, La Caricature newspaper ceased to exist but Maison Aubert began publishing the equally controversial satirical newspaper, Le Charivari. 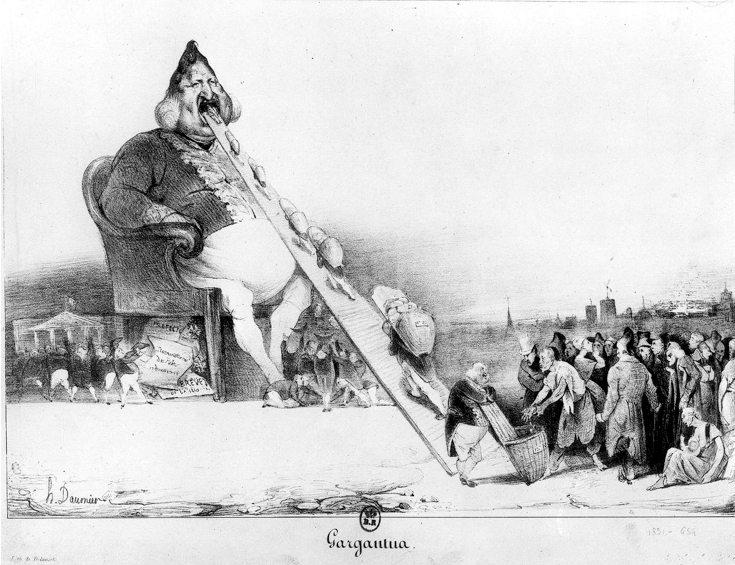