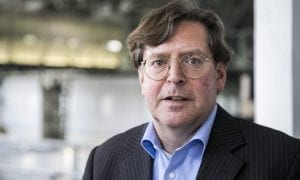 Udo Ulfkotte, a German journalist and whistleblower who spoke out against fake news from government and intelligence sources, died from a heart attack at the age of 56. He was an assistant editor for German mainstream media newspaper Frankfurter Allgemeine Zeitung, and he lived in many Middle Eastern countries during his career, including Iraq, As Iran’s economy teeters on the brink of collapse under the tough sanctions regime imposed by the Trump administration, the Islamic Republic’s authoritarian leadership has spent its limited cash reserves to bolster terror groups such as Hezbollah and Hamas, as well as militant terrorists in Syria, Iraq, and Yemen. Iran has spent more than $16 billion during the past several years to fund militant terrorists across the Middle East, cash that was repatriated to the Islamic Republic under(...)

As Ulfkotte became increasingly upset at news reports sourced from false government information, he began publishing a magazine called Whistleblower, which reports on topics not covered by the German media. He also wrote multiple books on the subject during the 2000s.

Acknowledging that his life was under threat, Ulfkotte explained that he was in a better position than most journalists to expose the truth because he didn’t have any children who could be threatened. Speaking to the Russian newspaper Russian Insider, Ulkfotte said: “When I told the Frankfurter Allgemeine Zeitung (Ulfkotte’s newspaper) that I would publish the book, their lawyers sent me a letter threatening with all legal consequences if I would publish any names or secrets – but I don’t mind. You see, I don’t have children to take care of.“

His fears for a

Go to Term Page
" >war in Europe, lead him to his decision to tell the truth about corporate media being controlled by intelligence services on behalf of the financial class.

“I’ve been a journalist for about 25 years, and I’ve been educated to lie, to betray, and not to tell the truth to the public,” Ulfkotte told Russia Today. “I was supported by the Central Intelligence Agency, the CIA. Why? Because I am pro-American.”

“The German and American media tries to bring war to the people in Europe, to bring war to Russia. This is a point of no return, and I am going to stand up and say… it is not right what I have done in the past, to manipulate people, to make propaganda against Russia.”

Ulfkotte’s book Bought Journalists became a bestseller in Germany but, in a bizarre twist which Ulfkotte says characterizes the disconnect caused by CIA control of the western media, the book cannot be reported on by the German press.

Among the stories Ulfkotte says he was ordered by the CIA to plant in his newspaper was a fake story that Libyan President Moammar Gaddafi was building poison gas factories in 2011.

“This is a point of no return, and I am going to stand up and say … it is not right what I have done in the past, to manipulate people, to make propaganda against Russia, and it is not right what my colleagues do, and have done in the past, because they are bribed to betray the people not only in Germany, all over Europe. … I am very fearful of a new war in Europe, and I don’t like to have this situation again, because war is never coming from itself, there is always people who push for war, and this is not only politicians, it is journalists too. … We have betrayed our readers, just to push for war. … I don’t want this anymore; I’m fed up with this propaganda. We live in a banana republic, and not in a democratic country where we have press freedom.” 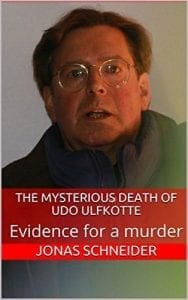 The known journalist Udo Ulfkotte died on the 13th of January, 2017. The author of the bestseller „Journalists for Hire” suffered a heart failure according to official reports.
On closer inspection doubts about this theory arise.
There is evidence which points to a murder. 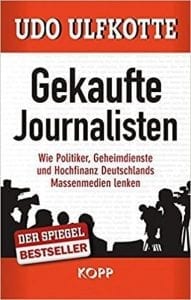 This book is a GERMAN BESTSELLER since its release a couple of years ago. The author makes damning, explosive revelations about how the CIA and other U.S. intelligence agencies regularly bribe mainstream German journalists and news anchors to write pro-U.S. propaganda articles in German newspapers such as Frankfurter Allegmeince, where author Udo Ulfkotte was one of the editors. Not only did the CIA bribe him and other German journalists to write American propaganda–often demonizing Russia for example–but the CIA would email the German journalists entire articles, pre-written, to publish! Also, those journalists that do not cooperate with the CIA are then removed from their positions, demoted, etc. If you don’t speak German go to YouTube and type in “Journalist Udo Ulfkotte: German Media PsyOps [ENGLISH]” and you can watch Udo Ulfkotte in English totally explain what this book is about, and what is happening. It tells you how good this book is, that even though this has been a German bestseller book for at least a couple years now, it is still not available in English. Why? There must be a lot of pressure on the publisher to not come out with the English version because it makes the U.S. government look bad, very bad indeed. But come on! Get this book out in English already! The public has a right to know about the grotesque degree of corruption, lies, and blatant disinformation that America force feeds on the German public, Europe, and of course at home in the USA. (Amazon Review by Stephen Hitchcock on Aug 4, 2016) 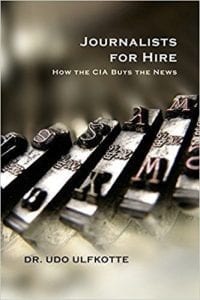 12 months ago
(by Mint Press News) With election fever still gripping the U.S., talk of rigging or interference in the democratic process is reaching new levels, high enough that even Hollywood legend Angelina Jolie is talking about it. In an extraordinary interview in Time magazine, the star of “Wanted, Maleficent, and Lara Croft: Tomb Raider,” sat down with the former head of the UK’s MI6 spy network, Sir Alex Younger, to ask how worrying the threat from Russia or China really is. “Russia feels threatened by the quality of our alliances and, even in … Read More

Project Veritas Undercover: Google Insider Says “Platforms Influencing You In Ways You Didn’t Sign Up For”

12 months ago
Project Veritas has dropped another bombshell about Google’s monopoly power to censor and manipulate search results. One of the top leaders in Google’s Cloud division admitted to Project Veritas on undercover video that Google was manipulating users’ political views. “All of the social media and the online platforms know your political leanings,” said Ashwin Agrawal, the head of global competitive analysis at Google Cloud. “Now, the more you see a Biden ad, the more, you know, passionate or the more sort of leaning you’re going to come for Biden.” Once … Read More

12 months ago
Hidden audio has emerged from an anonymous source who took the election work training classes in Detroit, Michigan. And you won’t believe what the trainers are instructing the poll workers to do. The audio, posted in a video on YouTube, reveals that election workers are trained to try to kick out poll watchers and anyone who challenges any ballot. “They have to wear a mask, and they have to stay six feet. That’s important because if you don’t have six feet, they can’t come back there,” advises the instructor, who … Read More

2 years ago
The Telegraph reports that a recent study claims that Google makes its websites faster than rival services by using code to dominate online networks. Researchers from Cargenie Mellon University and software firm Nefell Networks claim in the study that a Google algorithm can dominate almost half of a network’s capacity when there are multiple online services vying for connections. The report claims that Google-owned websites such as YouTube could stream videos faster than other competitors such as Netflix if users sharing the same connection try to access both sites simultaneously. This algorithm can be … Read More

2 years ago
French intelligence have thwarted a terror attack directed at Paris that they said would have been similar in size and scope to the 9/11 terror attacks in the US that knocked down the North and South towers and crashed a plane into the Pentagon, the French newspaper Le Parisien reports. A suspect is currently being held in France on preliminary terrorism charges after apparently planning a 9/11-style attack that would have involved several plane hijackings and dozens – if not hundreds – of deaths. French intelligence must be … Read More

4 years ago
Actor/musician Corey Feldman was arrested Saturday night on ‘unspecified’ drug charges, according to the Richland Parish Sheriff’s Office in Louisiana. “The Goonies” star and his band were scheduled to play that night at the Live Oaks Bar and Ballroom, but was arrested before the show started. Feldman was arrested in Richland Parish, Louisiana, for one count of marijuana possession along with a traffic charge. Feldman was released without being booked into jail, The News Star reported. Though he was not in custody for long, the arrest caused Corey Feldman … Read More

9 years ago
Jordanian authorities say they foiled an Al Qaeda plot to attack shopping malls and Western diplomatic missions using suicide bombers, booby-trapped cars and rockets smuggled in from Syria on a date terrorists dub “9/11 the second.” Some 11 suspected Al Qaeda-linked militants were arrested for what would have been the terror group’s first attack since a triple hotel bombing in Amman almost seven years ago, which killed 60 people, the government said Sunday. Al Qaeda has targeted Jordan because of the government’s alliance with the United States and … Read More

Ezra Taft Benson, Secretary of Agriculture and future President of the Church of Jesus Christ of Latter Day Saints, Gives a Speech on the Proper Role …

53 years ago
Men in the public spotlight constantly are asked to express an opinion on a myriad of government proposals and projects. “What do you think of TVA?” “What is your opinion of Medicare?” How do you feel about Urban Renewal?” The list is endless. All too often, answers to these questions seem to be based, not upon any solid principle, but upon the popularity of the specific government program in question. Seldom are men willing to oppose a popular program if they, themselves, wish to be popular – especially … Read More

The First Thanksgiving Occurred between Sept 21st and Nov 9th, 1621

400 years ago
The unfamiliar American soil presented problems to the Pilgrims, but an Indian named Samoset greeted them and taught them how to fertilize best fertilize the soil. The results (months later) were spectacular, and the Pilgrims had much to be thankful for in the new land. About 100 Indians were invited to share in a thanksgiving feast of those first bumper crops of beans, squash, corn, barley, and peas. The Indians brought fresh venison and turkey and other fowl was provided by the Pilgrims, and enjoyed a meal together … Read More