Kristina Rasmussen, the vice president of federal affairs for the Foundation for Government Accountability (FGA), said the government needs to do more to crack down on food stamp fraud because many of the benefits are going to those “willing to abuse the system.” “It’s really disturbing. Taxpayers work really hard to earn their money and the government takes a good portion of it. And some of that money does go into a social safety net that’s supposed to be there for people who really need our help,” Rasmussen told Sirius XM’s Breitbart News Sunday with Breitbart News Deputy Political Editor Amanda House.

Rasmussen referenced a January 2019 Government Accountability Office (GAO) report which found that at least $1 billion in food stamp benefits had been trafficked each year in the U.S., but she mentioned that the amount of fraud in this country “could be a lot higher than that.”

“Food stamp criminals can be a creative bunch and they are always coming up with new schemes once the authorities catch on to one, but generally speaking, there are two big buckets of fraud: Its people who are getting access to the program who shouldn’t be getting access … or folks who are accessing the program who really aren’t eligible,” Rasmussen said.

Rasmussen then went on to explain how food stamp fraud schemes work and how criminals go around government rules to use food stamps for unintended purposes to commit fraud. 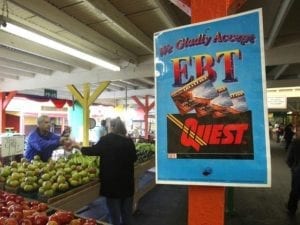 “Food stamps are supposed to be used for food and grocery items. You can’t take your food stamp card to the store and turn it in for cash but in too many instances that is happening. Or the card itself will be sold on the black market, say, for 50 cents on the dollar,” Rasmussen said. “Someone gets 100 worth of food stamp benefits and someone gets 50 bucks back.”

“The program has really gone beyond its original intent, and we need to do a lot more when it comes to policing the program but also be very careful about expanding it, just because we know we have problems with the program we have,” she added.

Rasmussen also noted that state governments are not doing enough to crack down on suspected fraudsters because of lax oversight over welfare benefit recipients or efforts to “massively expand enrollment” in the food stamp program.

Food stamp benefits are federally funded through the Supplemental Nutrition Assistance Program (SNAP) but administered at the state level.

“Checks often are not good enough,” Rasmussen said. “Some people will lie to get on the program and they’re not caught by the states, who should be doing a lot more robust checks.”