The Liquid bomb plot was a purported plan in 2006 to bomb an aircraft using an explosive made from liquids. The science behind this has been questioned by several commentators, including Bruce Schneier and James Petras. This event was cited as the main reason behind the introduction of restrictions on the carrying of liquids on aircraft, a measure which Schneier dismissed as “security theater”.

An announcement on August 10, 2006, claimed that a plot by alleged terrorists to use liquid bombs to blow up ten passenger jets traveling from UK to the US had been foiled through a cooperative effort by British and Pakistani authorities.

“The most frightening thing about the foiled plot to use liquid explosives to blow up airplanes over the Atlantic is that both the government and the aviation industry have been aware of the liquid bomb threat for years but have done little to prepare for it.”
(August 12, 2006)

On August 13, 2006, a Pittsburgh Post-Gazette editorial pointed out that we know few details of the plot. On August 15, 2006, Barry Grey reported at WSWS.org that “[f]ive days after UK authorities arrested 24 British-born Muslims and announced that they and their American counterparts had thwarted a plot to blow up trans-Atlantic flights from London to the US, neither the British nor the American government has produced any facts to substantiate their dire claims.

“No details of the supposed plot have been provided, and no hard evidence that would justify the arrest of so many people or the imposition of chilling security measures that had wreaked havoc at airports in the US and Britain,” Grey wrote.

“None of the alleged terrorists had made a bomb. None had bought a plane ticket. Many did not even have passports, which given the efficiency of the UK Passport Agency would mean they couldn’t be a plane bomber for quite some time,” UK writer and broadcaster Craig Murray. wrote on August 14, 2006.

“In the absence of bombs and airline tickets, and in many cases passports, it could be pretty difficult to convince a jury beyond reasonable doubt that individuals intended to go through with suicide bombings, whatever rash stuff they may have bragged in internet chat rooms.

“What is more, many of those arrested had been under surveillance for over a year – like thousands of other British Muslims. And not just Muslims. Like me. Nothing from that surveillance had indicated the need for early arrests.”

“I’d be interested in the number of plotters who had passports. How could they even stage a dummy-run with no passports? And what bomb-making materials did they actually have? These seem like legitimate questions to me; the British authorities have produced no evidence so far. If the only evidence they have was from torturing someone in Pakistan, then they have nothing that can stand up in anything like a court. I wonder if this story is going to get more interesting. I wonder if Lieberman’s defeat [in the August 8, 2006, CT Democratic primary], the resilience of Hezbollah in Lebanon, and the emergence of a Hezbollah-style government in Iraq had any bearing on the decision by Bush and Blair to preempt the British police and order this alleged plot disabled. I wish I didn’t find these questions popping into my head. But the alternative is to trust the Bush administration,” Andrew Sullivan wrote August 16, 2006. “Been there. Done that. Learned my lesson,” Sullivan says. 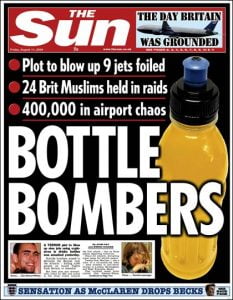 “Airport security screeners scrambled to implement a new ban on all liquids and gels — from lip gloss and toothpaste to perfume and tequila — in carry-on luggage” and “airport maintenance crews were ordered to dump any confiscated items along with the rest of the garbage,” CNN reported August 11, 2006.

However, not all airports strictly followed the directive. An airport spokeswoman at Phoenix Sky Harbor International Airport said that the airport “planned to give 11 boxes of surrendered items to the city’s human services department, which will give the unopened bottles of shampoo, toothpaste and other items to homeless shelters” and Pennsylvania “state officials were considering pulling some discarded items for a state program that resells on eBay any items of value relinquished at airport security checkpoints,” CNN reported.

“Airline security is a joke,” Xymphora commented on August 15, 2006, “with the neanderthal screeners picking out the 90-year-old grandmothers for strip-searches, and the guards pouring all the chemicals, which supposedly explode on being mixed, into the same vats. Why can’t the terrorists soak their sweaters in one chemical, their shirts in another, and repair to the airplane bathrooms to soak themselves up an explosion when the two chemicals are mixed? Whether they actually do this or not, the politicians can continue to fool us as long as there is a reasonable reason to believe that there is anger in the world-wide Muslim community.”

A 2008 report in the Daily Mail stated that “Plastic Oasis and Lucozade bottles were to be used by the plotters to make their liquid bombs. A hypodermic syringe would be inserted into the base to draw out the drink and the bomb mixture would be injected in its place. A homemade detonator called hexamethylene triperoxide and also known as HMTD would be made from a mixture of household and commercial ingredients and disguised in AA batteries. Bulbs and wires would connect the bomb mixture with disposable cameras to trigger a charge to set it off.”