Silver bullion banks Deutsche Bank, Bank of Nova Scotia and HSBC have been accused of manipulating prices in the multi-billion dollar market in a lawsuit filed on July 25, 2014. However, a closer look reveals that the plaintff in the lawsuit, J. Scott Nicholson, has a recurring bone to pick with the banks as this is certainly not his first lawsuit alleging precious metals rigging, and as such we are convinced it will be tossed out shortly, along with every other lawsuit alleging a manipulated precious metals market since discovery could lead to some very unpleasant revelations about the primary source of gold and silver rigging: the central banks themselves, alongside the BIS.

Instead, we uncovered something that was missed several few weeks earlier: a far more informative and detailed class action lawsuit filed by Edward Derksen on July 9, 2014 against the London gold fix member banks: Bank of Nova Scotia, Barclays, Deutsche, HSBC and SocGen (profiled here in From Rothschild To Koch Industries: Meet The People Who “Fix” The Price Of Gold).

Recall from “How Gold Price Is Manipulated During The “London Fix“” that this was one of the first conspiracy theories about gold manipulation to end with a bank, and following the official revelation (as opposed to merely on the pages of fringe blogs) that over 100 years the price of gold was consistently manipulated during the London fix (and during every other period as well but that is a revelation for a different time) the very process of the Gold and Silver Fix itself was finally ended (only to be replaced with a comparable process run by the very same people who manipulated gold and silver from Rothschild’s London office on St. Swithin’s Lane for decades.

The short and sweet summary of the lawsuit:

Nothing new there, but while the allegations in the lawsuit are well-known to frequent (and all other) readers of Zero Hedge, we recommend reading the full filing as it explains in clear English just what the fixing process worked.

Perhaps what is more interesting are the abnormalities in the price of gold as highlighted by Derksen, which clearly show the critical role the daily fix has in the manipulation of the price of gold, both in a downward and upward direction: whichever suits the London Fix member banks.

Here are some of the highlights:

The following chart of average intraday gold price shows the same strong relationship between the physical gold and the COMEX gold futures markets. 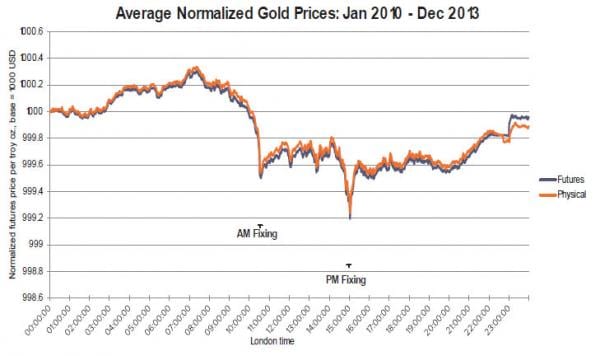 Anomalous price movements during the fixing window that are highly suggestive of manipulation – like those on June 28, 2012 – can be witnessed on numerous days, where prices near the 3 p.m. London Fix spike, either upward or downward, and then retreat in the opposite direction as the price is “fixed”. Five trading days are analyzed below as illustrative of the overall trend during the Class Period. On February 1, 2013, there was a dramatic drop in price from nearly $1678 to below $1665, contemporaneous with the beginning of the London Fix. The price began recovering during the London Fix and continued  afterwards. This movement around the fixing window is highly anomalous and suggestive of manipulation because it tends to show that the market ultimately discounted to some degree the pricing information that occurred during the London Fix. 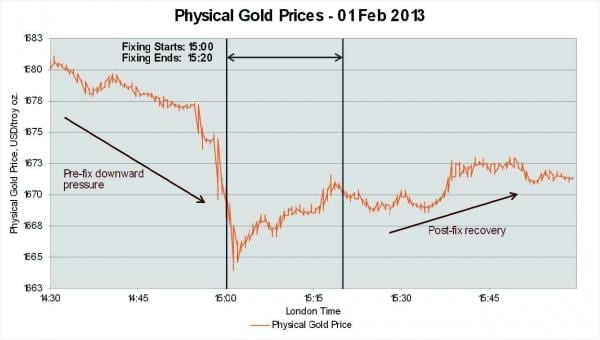 On January 4, 2012, there was anomalous price movement before the beginning of the PM Fix call, this time in an upward direction. The gold price rose from below $1599 to more than $1614 within the half hour before the beginning of the call, only to surrender most of these gains within the half hour following the call. This movement around the fixing window (steep rise just before the call, with a clear reversal that begins at the very beginning of the call) is highly anomalous and suggestive of manipulation because it tends to show that the market ultimately discounted to some degree the pricing information that occurred during the London Fix. 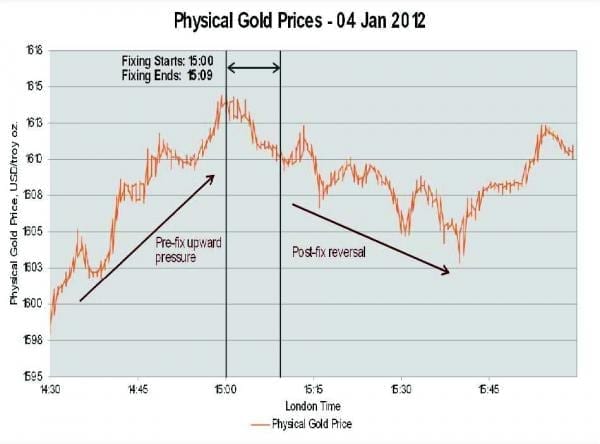 On May 21, 2013, the gold price declined significantly in the 25 minutes prior to the call only to recovery briskly once the call ended. This movement around the fixing window is highly anomalous and suggestive of manipulation because it tends to show that the market ultimately discounted to some degree the pricing information that occurred during the Fix 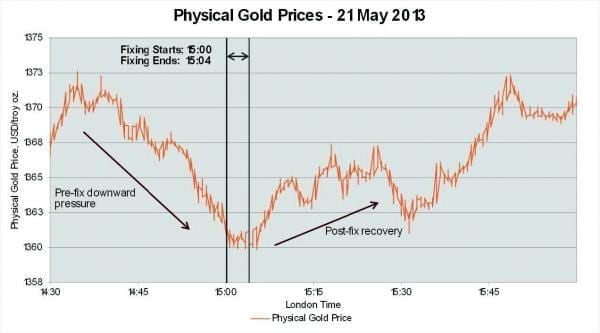 If the five previous examples of anomalous volatility around the London Fix mere statistical outliers and not evidence of manipulation, then it would be expected that this volatility would disappear when looking at an average of all the trading days during the class period. To the contrary, the price manipulation actually becomes clearer when viewed over the past fifteen years. The chart below shows the change in physical gold prices if each trading day for the period from 1998 through 2013 were averaged together. The dramatic changes in price followed by swift reversals at the time of the AM and PM London Fix in this chart demonstrate that the phenomenon is not coincidental statistical noise occurring on only a few cherry-picked dates, but rather is a clear trend that cannot be explained by chance.

And the logical continuation:

The chart below demonstrates from 1998-2013 the rate of “forecast error” – a square of the difference between predicted market moves based on econometrics and the market’s actual moves. These forecast errors hit a massive peak during the brief period that is encompassed by the 3 p.m. London Fix. Appendix B contains charts of forecast errors broken down by year. This is contrary to what should occur in a market free of manipulation. 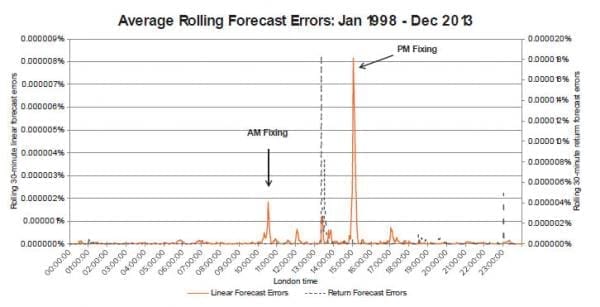 Ok, gold was manipulated. But it must have been manipulated up as well as down, so in effect the two would offset each other right?

Although the London Fix was associated with both manipulative and abnormal increases and decreases in gold prices, the London Fix appears, in the aggregate, to have had a net negative effect overall on the price of gold throughout the Class Period. This can be demonstrated by examining the price of gold during the part of the trading day closest to the London Fixes. Gold is traded 24 hours a day. The trading day for gold can be broken up into three equal eight-hour periods, the “Fixing Period” from 8:00-16:00 London Time in which both the AM and PM London Fixes occur, the “Pre-Fix Period” from 0:00-8:00 and the “Post Fix Period” from 16:00-24:00 London time. If the volatility surrounding the London Fix was purely random and not the result of manipulation, there would be no significant difference over time between the period containing the London Fixes (8:00-16:00) and the Pre-Fix and Post-Fix periods.

However, as the chart below demonstrates, gold prices during the Fixing Period (8:00-16:00) moved consistently lower over time when compared to price activity during Pre-Fix and Post-Fix portions of the trading day. This trading pattern is consistent with manipulation and cannot be explained by random variation. 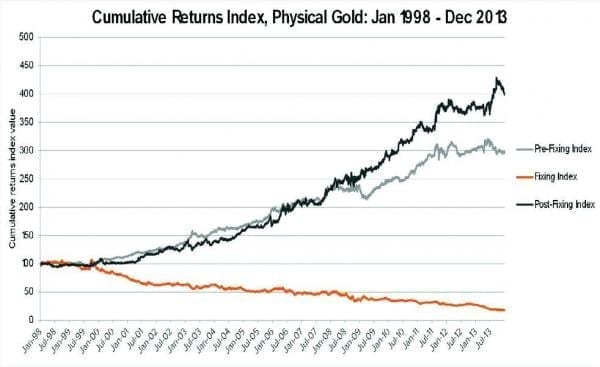 As shown above, the manipulation detailed herein both artificially inflated and artificially suppressed the price of gold, injuring both long and short holders of gold futures and options contracts. To the extent the aggregate trend has been to suppress prices,this has resulted in (as of the last available “This Month in Gold Futures Market” Report from the CFTC44) an extraordinarily positive result for Commercial Traders in gold futures contracts (who held between 352,500 and 381,200 short futures contracts, as opposed to merely 140,900 to 145,100 long futures contracts in the same period. This heavy weight toward shorting gold futures contracts means a net drop in gold prices would be extremely lucrative for commercial traders. “Commercial” Traders are entities, such as Defendants, that use futures or options for hedging purposes, as opposed to “non-commercial” entities that do not own the underlying asset or its financial equivalent and hold only derivatives contracts.

Most importantly, it is no longer just some tinfoil goldbug making manipulation allegations: the very head of Germany’s BaFIN regulator agrees:

Plaintiff did not discover, and could not have reasonably discovered through the exercise of reasonable diligence, the wrongdoing discussed in this complaint, until, at the very earliest, January 2014, when Defendant DB withdrew from the fixing after interviews with Bafin, Germany’s financial regulator.

Before the DB departure was announced and Bafin’s president revealed the seriousness of the allegations, Plaintiff could not have stated facts plausibly stating the conspiracy to manipulate the price of gold and gold derivatives.

The activity Defendants undertook was of a self-concealing nature. The London Fix teleconference is not publicly-accessible. The information Defendants received from their clients about the demand for purchases and sales of gold before and during the teleconference were not publicly-accessible. Without these pieces of information, Plaintiff would not be able to discern market dislocation or the existence of spoof trades.

In summary, the lawsuit’s conclusions are as follows:

The price activity surrounding the London Fixes is indicative of manipulation and not natural market forces for the following reasons: