Dynasties listed below were included in America’s 60 Families, Ferdinand Lundberg’s 1937 expose on the super-rich. Ferdinand Lundberg used tax records to uncover the often impenetrable financial and political machinations of the 60 Families, effectively publishing a directory of names and occupations of family scions as well as estimates of their fortunes. 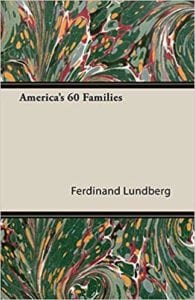 Families are listed in ranked order (according to 1924 tax records) with their primary sources of wealth.

”E.C. Lindeman, the outstanding authority on the internal functioning of foundations, states in his monumental WEALTH AND CULTURE, published in 1936, that his `first surprise was to discover that those who managed foundations and trusts did not wish to have these instruments investigated. Had it occurred to me then,’ he continued, `that it would require eight years of persistent inquiry at a wholly disproportionate cost to disclose even the basic quantitative facts desired, I am sure that the study would have been promptly abandoned.”

“An extraordinarily complex and resourceful personality like Thomas W. Lamont, who has been the brains of J.P. Morgan and Company throughout the postwar period and was a mentor of Woodrow Wilson in Wilson’s second administration as well as of President Herbert Hoover throughout his fateful single term in the White House, has exercised more power for twenty years in the western hemisphere, has put into effect more final decisions from which there has been no appeal, than any other person. Lamont has been the First Consul de facto in the invisible directory of postwar high finance and politics, consulted by presidents, prime ministers, governors of central banks, the directing intelligence behind the Dawes and Young Plans. Lamont is Protean; he is a diplomat, an editor, a writer, a publisher, a politician, a statesman an international presence an international presence as well as a financier.”

He explained that Lamont told businessmen in 1915 that America had to promise to enter the Great War so we could bankrupt our allies.

“The Morgan firm and its affiliated commercial banks act, broadly, on behalf of such tremendous accumulations as those of the Vanderbilts, Goulds, Drexels, Wideners, Berwinds, Phippses, Hills, Dukes, Ryans, McCormicks, Bakers, DuPonts, Fishers, Jameses, and Others.’ (p.36)

Citing other sources, he stated “H. CLAY PIERCE PUT UP THE MONEY BEHIND (FRANCISCO) MADERO AND STARTED THE REVOLUTION” (the Mexican revolution of 1910)

Lundberg notes on page 225 Avery Rockefeller Senior’s involvement in causing investors $150 million in losses in Anaconda stockas they see-sawed the stock between $40 and $128 in 1928-29, and on page 238, additional losses of $200 million in manipulations of the International Match Corporation.

On the 1912 Presidential Election:

“Throughout the three-cornered fight [Taft-Roosevelt-Wilson] Roosevelt had [Morgan agents Frank] Munsey and [George] Perkins constantly at his heels, supplying money, going over his speeches, bringing people from Wall Street in to help.”

Lundberg noted that “Perkins and J.P. Morgan and Company were the substance of the Progressive Party.” J. Pierpont Morgan was perhaps the most powerful banker in America at the time. New Jersey Governor Woodrow Wilson, on the other hand, was also supported by banking interests, specifically Morgan. With the Republican Party split between Taft and Roosevelt, Wilson won the presidential election.

Wilson proceeded to support the passage of the work of the men who clandestinely met at Jekyll Island two years earlier, and won passage of the Federal Reserve bill in late 1913. Today, most Americans little question the Fed, and assume that the country has to have such a system of printing of a fiat currency.

“The New Deal was neither revolutionary nor radical … [it] was a concession in the face of widespread unrest.”