Activist attorney Mark Zaid, who would later represent the anti-Trump CIA “whistleblower” Eric Ciaramella is also linked to Hillary Clinton’s campaign manager John Podesta. Zaid’s was caught admitting his goal is to remove Trump from office. Mark Zaid, a committed leftist, tweeted in 2017 that “we will get rid of” President Trump.

“The whistleblower’s lawyer gave away the game,” the Trump campaign’s communications director, Tim Murtaugh. told Fox News after the tweet(s) were unearthed again in November 2019 while Zaid carried out an important part of the coup of representing the phony whistleblower and keeping his anti-Trump identity under wraps. “It was always the Democrats’ plan to stage a coup and impeach President Trump and all they ever needed was the right scheme. They whiffed on Mueller so now they’ve settled on the perfectly fine Ukraine phone call. This proves this was orchestrated from the beginning.”

Zaid in response to a tweet from President Trump on the same day once again boasted of a “coup” to remove him from office.

“#coup has started. As one falls, two more will take their place. #rebellion #impeachment” Zaid said admitting that the Deep State will continue to make up new scandals until one does the trick and removes Trump from office.

Statement on the Appointment of Dana Boente as Acting Attorney General: https://t.co/fkAWOmnrsP

Zaid would tweet a little later in 2017 that “we will get rid of” President Trump.” 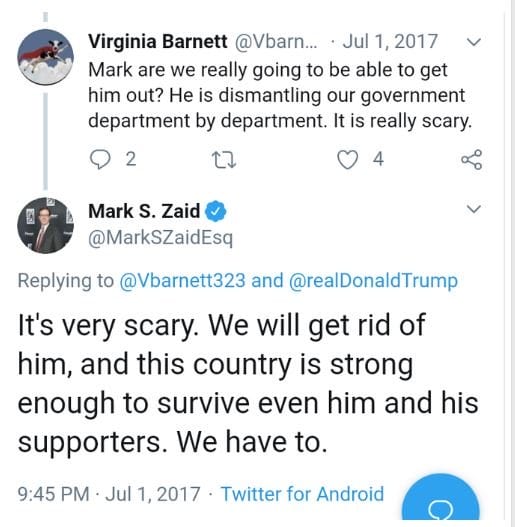 His remark is notable, given Zaid frequently ‘liked’ YouTube videos of young Disney girls, including ones called “Top 10 prettiest disney channel stars” and “Selena Gomez from child to women.”

Zaid also apparently enjoys visiting water parks and Disney World by himself, evidenced by the many photographs documented on social media.

He also once said: “I would have joined FBI just for the free Disney passes.”

Mark S Zaid, the whistleblower’s lawyer, goes to Disney World by himself

Additionally, Zaid claimed being associated with well-known billionaire pedophile Jeffrey Epstein, his client of 25 years, was “probably a good thing” in response to growing media scrutiny over their relationship following Epstein’s suspicious death in prison.

Not sure if being a “little known lawyer” is good thing or bad, although associated with Epstein probably a good thing.https://t.co/lqcYc47cMA

“Many have asked why someone like Mark Zaid would document their solo vacation to Disney World or other such activities and link it to their Facebook profiles,” said Alex Jones. “It appears to be a way of discreetly broadcasting to like-minded clientele and colleagues what sort of circles you may be running with, what kind of things you may be into.”