Mattel launched a line of dolls with no distinctive feminine or masculine features because “kids don’t want their toys dictated by gender norms”. To promote the dolls, a video was released featuring actual “gender-neutral” children. And what is said during that video is completely baffling.

The war against genders is still on. More than ever. After Céline Dion’s “gender-neutral” clothing line for children (which contained horrifying symbolism), Mattel has released dolls that assume no identifiable gender.

The gender-neutral dolls of the new Creatable World toy line let kids accessorize the toy to be a boy, a girl, both or neither. The six dolls have different skin colors, hairstyles, and clothing to “celebrate the positive impact of inclusivity.” Each customizable doll comes with long and short hair wigs, skirts, pants, shirts, jackets, hats, and various shoes. To achieve “gender-neutrality”, Mattel toned down feminine and masculine features, such as Barbie’s breasts and Ken’s broad shoulders. The line is said to be geared towards kids who identify as gender-fluid, meaning they don’t identify as having a fixed gender like male or female.

According to Mattel’s website, the line is “designed to keep labels out and invite everyone in, giving kids the freedom to create their own customizable characters again and again”. 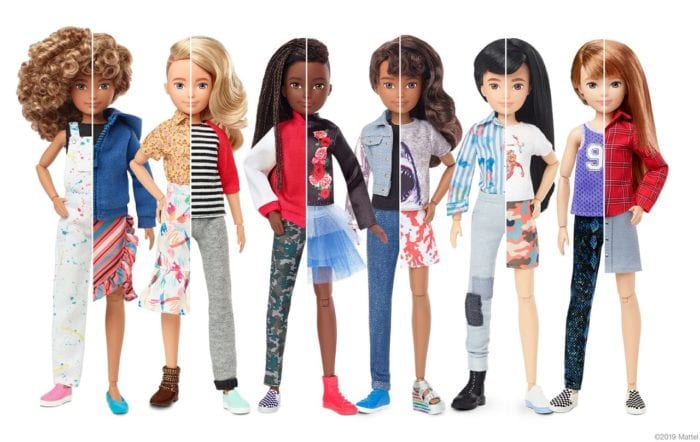 During development, Mattel tested the doll with 250 families in seven states, which included 15 children who considered themselves trans, gender-fluid or avoided defining themselves altogether.

As it is the norm nowadays, the promotion surrounding the line was coated in a thick layer of social indoctrination and “facts” that border on utter absurdity. Kim Culmone, senior vice president of Mattel Fashion Doll Design said in a statement:

“Toys are a reflection of culture and as the world continues to celebrate the positive impact of inclusivity, we felt it was time to create a doll line free of labels. Through research, we heard that kids don’t want their toys dictated by gender norms.”

I’m sorry but that’s a lie. Children do not complain about their toys “being dictated by gender norms”. And the video promoting the toy line contains many other preposterous lies.