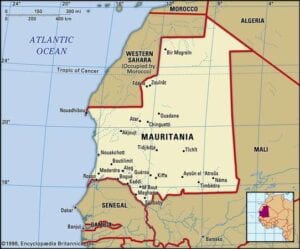 Mauritania, country on the Atlantic coast of Africa. Mauritania forms a geographic and cultural bridge between the North African Maghrib (a region that also includes Morocco, Algeria, and Tunisia) and the westernmost portion of Sub-Saharan Africa. Culturally it forms a transitional zone between the Arab-Amazigh (Berber) populations of North Africa and the African peoples in the region to the south of the Tropic of Cancer known as the Sudan (a name derived from the Arabic bilād al-sūdān, “land of the blacks”). Much of Mauritania encompasses part of the Sahara desert, and, until the drought conditions that affected most of that zone of Africa in the 1970s, a large proportion of the population was nomadic. The country’s mineral wealth includes large reserves of iron ore, copper, and gypsum, all of which are now being exploited, as well as some oil resources.

Mauritania was administered as a French colony during the first half of the 20th century and became independent on November 28, 1960. By the terms of the constitution, Islam is the official state religion, but the republic guarantees freedom of conscience and religious liberty to all. Arabic is the official language; Fula, Soninke, and Wolof are national languages. The capital, Nouakchott, is located in the southwestern part of the country.