In New Zealand in 2009, a political activist and writer for Uncensored Magazine, Clare Swinney, received death threats after publishing an article entitled ‘Why Does TVNZ [Television New Zealand] Lie to us about 9/11?’, which cited evidence that the US government was involved in the September 2001 attacks. She also brought a complaint to the Broadcasting Standards Authority alleging that the television station’s claim that Osama Bin Laden carried out the attacks was an outright lie. A few days later she was taken into psychiatric custody by social workers and police officers, who told her that they were acting on a tip-off from a relative that Swinney might be suicidal.

At Northland Base Hospital in Whangarei she was diagnosed as delusional, and it soon became apparent that the only reason she was being held was her belief that the 9/11 attacks were orchestrated by criminal elements within the US government. This diagnosis is illegal under New Zealand law, where section 4 of the New Zealand Mental Heath Act states that no one can be judged to be mentally ill solely on the basis of their political beliefs. The psychiatrists at Whangerei refused to look at evidence – Swinney’s well-researched published articles – that her beliefs were rationally held. Instead, the chief psychiatrist, Dr Carlos Zubaran, held to his diagnosis of a delusional disorder for the duration of Swinney’s incarceration, from which she was only able to extricate herself after eleven days. 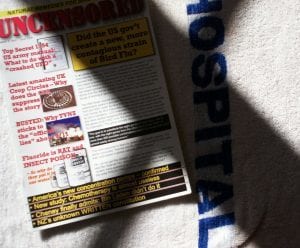 I was wrongly diagnosed as delusional by the psychiatric staff of Ward 7 at Northland Base Hospital in Whangarei and held against my will for 11 days in mid-2006, because I maintained the attacks of 9/11 were orchestrated by criminal elements inside the US Administration.

A definition of delusional: relating to,  based on, or affected by delusions.  A delusion: a false belief strongly held in spite of invalidating evidence, especially as a symptom of mental illness.

In light of the definition, one of the most astounding aspects to the ordeal was that when I met with the chief psychiatrist, Dr Carlos Zubaran for two formal mental health assessments,  I held Issue 3 of Uncensored, which is shown in the picture above, and asked him to look at information related to the 9/11 attacks.  This magazine contained an article I’d written entitled: Why Does TVNZ Lie To Us About 9/11?, which cited evidence that proved the official fable was a lie – yet reminiscent of the fabled vampires afraid of the light of day, he refused to even cast his eyes over it, during both of the so-called “assessments.”

Another astounding aspect to what occurred was that Section 4 of the New Zealand Mental Health Act makes it clear that no one can be judged to be mentally ill solely on the basis of their political beliefs.   The District Inspector for Mental Health – Northland, barrister Julie Young; Bridget Westenra, the lawyer she appointed to assist me and the staff of Ward 7, including the chief psychiatrist, did not appear to know this.   As can be seen, it is written in layman’s language on page 33 of Chapter 2 of Mental Health (Compulsory Assessment and Treatment) Act 1992,  which is on the Ministry of Health’s own website:  ‘You cannot be considered to have a mental disorder just because of your:   political, religious or cultural beliefs…’.

As this Judgement shows, because of his reluctance to scrutinize the evidence related to 9/11 and apparent lack of awareness of  Section 4 of the Act,  nine days into my incarceration, Dr Zubaran still held the belief I suffered from a “delusional disorder” owing to my political beliefs.

The evidence that shows the official story of 9/11 was indeed a lie is now overwhelming.  We now have what has been referred to as the “loaded gun” – this is the unignited nanothermite, a highly-advanced explosive substance, which was far too sophisticated a composite to have originated from a cave in Afghanistan. Think military.  Think US government.

The following article, which relates to what occurred in Ward 7, was published in Issue 8 of Uncensored.   Thankfully, since writing about what happened and making numerous phone calls, plus sending many letters, as well as supplying numerous DVDs to the staff of Ward 7 to show them the truth about 9/11 – and then finally threatening to protest outside the hospital,  the Clinical Director of Mental Health & Addiction Services in Northland sent an apology in August 2008, which can be viewed here.

Dr Zubaran did not apologise.

James Corbett of The Corbett Report Interviews Clare Swinney On The Topic Of Weaponized Psychology, ( 9/9/09):

12 months ago
In late 2019 by Zhang Jixian noticed a cluster of severe infections linked to Huanan Seafood Market. On 30 December 2019 another Chinese doctor, Li Wenliang, warned colleagues of his suspicions that they faced a hitherto unknown virus and alerted the world via the Internet. The Western commercially-controlled media promoted the idea that the virus was of natural zoonotic origin, and originated in China, although independent voices cast doubt on both claims, noting that BSL4 laboratories including the Wuhan Institute of Virology (WIV) had been working on “gain of function” for coronaviruses, and that numerous piece of circumstantial … Read More

2 years ago
This is all political theater. The Department of Homeland Security on Wednesday issued a national terrorism advisory to last several weeks. “There is currently a heightened threat environment across the United States that is likely to persist over the coming weeks,” the DHS bulletin said before admitting they “do not have any information to indicate a specific, credible plot.” The DHS took a veiled shot at Trump supporters and conservative media outlets even though the only violence since Biden’s inauguration has been by far-left Antifa and BLM in … Read More

3 years ago
Totalitarian Congresswoman Kathy Castor (D-Fla.) demands Google censor climate skeptics on YouTube. Not only are we winning the debate… we are forcing our opponents to show who the actual would-be-dictators are. Read the entire letter (Web | PDF). Excerpts below … Read More

3 years ago
A man who describes himself as a former homosexual is suing the online video platform Vimeo for closing his account after he posted videos of his Christian testimony. Vimeo bans users from promoting “gay-conversion therapy,” or efforts to change sexual orientation. On Monday, U.S. Magistrate Judge Stewart Aaron in Manhattan reserved a decision on a motion to dismiss the case brought by James Domen, who is now a pastor, and his California-based non-profit Church United, reported Courthouse News. Domen alleges Vimeo shut down his account in bad faith … Read More

3 years ago
Wray’s FBI lies again and claims it did nothing wrong. Attorney Ty Clevenger reported to the courts on Monday that despite numerous assurances from the FBI that they had no information related to Seth Rich, the FBI had been caught and therefore was lying to him all this time.  (See timeline below). In response, the DOJ immediately stepped in with a letter to the judge.  In this letter the DOJ claimed the FBI had met its burden and its search would have located emails “of investigative significance”: The … Read More

4 years ago
Two bombs at a Roman Catholic cathedral in southern Philippines killed 20 people and injured dozens more, local officials say. The Islamic State (IS) group said it was behind the attack on Jolo island, where jihadist groups are active. The first blast happened as Sunday Mass was being celebrated. A second device exploded outside as soldiers responded. The attack came days after a majority-Muslim area in the region voted for greater autonomy in a referendum. A statement from IS said the attack was carried out by “two knights … Read More

6 years ago
I will begin by saying, we are living in a time where the dangers of Military technology is now beyond our control. We live as guinea pigs in a world where those with the power, knowledge and technology keep us from our true freedom. To live with free will in this beautiful world. They manipulate us, direct us and destroy everything that was truly divine and sacred in our mind. In this timeline we must decide, will they take our spirit and destroy what god intended or will … Read More

7 years ago
TownHall reported on the Gore’s fearmongering on that day: Watch out world, and we are sorry if you had not realized before reading this, the world is ending today. That’s because today is the day that climate change entrepreneur, and former US Vice President, Al Gore warned us would be the beginning of a global emergency. Mr Gore told his supporters a decade ago that the world had until 27th January 2016 to end its addiction to fossil fuels or the it would come to an end. Gore … Read More

8 years ago
Ant Financial introduced a universal credit score, where everybody in China is measured by how well you manage credit, and how well your political opinions are in line with Chinese official opinions, and even whether your friends’ are. Initially voluntarily, the system becomes mandatory in 2020 with sanctions for the ‘less obedient’. China’s largest social networks have partnered with the country’s Communist government to create a credit score system that will measure how obedient its citizens are, a chilling prospect that could one day arrive in America if … Read More

Mama Lois Anderson, Who May Have Helped with the Birth of Obama, is Murdered in Kenya 2 Weeks Before He Enters Presidential Race

16 years ago
‘Mama Lois’Anderson,  an American Christian Missionary, who reportedly helped young Ann Dunham handle events surrounding the birth of Barry Soetoro (Barrack Hussein Obama), was murdered in Kenya on January 27, 2007. Obama formerly declared his intention to enter the race for the U.S. presidency on February 10, 2007. The circumstances surrounding the murder and carjacking were very troubling and suspicious. Was Lois Anderson murdered to prevent any possibility that she might reveal 1st hand account details regarding the birth of Barack Obama in Kenya in August 1961? Setting aside … Read More

48 years ago
The Church Committee was formed following one of the most controversial events in American history. Watergate had revived American feelings of distrust in their government. Also, Seymour Hersh, of the New York Times, ran an article on December 22, 1974, concerning alleged intelligence abuses by the CIA and other intelligence agencies; American suspicions grew. In an attempt to respond and alleviate American distrust, the Ford Administration and both the House of Representatives and the Senate launched investigations into the intelligence community. On January 27, 1975, the Senate passed … Read More

56 years ago
Virgil “Gus” Grissom, the Senior astronaut and slated to be the first to walk on the moon but outwardly critical of the moon program, and his crew, were killed during a launch pad simulation. His family maintains he was murdered. Thomas Baron investigated the incident and determined it was sabotage and prepared a 500 page report. Shortly after, Baron and his family were mysteriously hit and killed by a train and the 500 pg. report disappeared to never be found again. Two years before the first moon landing, … Read More

185 years ago
As one of Abraham Lincoln’s earliest published speeches, this address has been much scrutinized and debated by historians, who see broad implications for his later public policies. Lincoln was 28 years old at the time he gave this speech and had recently moved from a struggling pioneer village to Springfield, Illinois. William Herndon, who would become Lincoln’s law partner in 1844, describes the event this way: “we had a society in Springfield, which contained and commanded all the culture and talent of the place. Unlike the other one … Read More