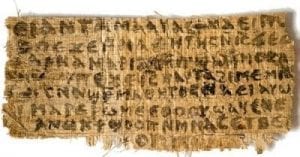 An ancient and much-debated fragment of the Gospel of Mark has been dated to the late second to early third century A.D., making it the oldest fragment of Mark ever found.

The Egypt Exploration Society made the announcement about the fragment – known as P.Oxy LXXXIII 5345 – on its website May 24.

“After rigorous comparison with other objectively dated texts, the hand of this papyrus is now assigned to the late second to early third century AD,” the society said.

The society added that “the two sides of the papyrus each preserve brief traces of a passage” from Mark. It was found around 1903 along with many other ancient documents, the society said.

It is the same fragment that helped set off a debate in 2012 when news leaked that the fragment could date to the first century, which would have made it the oldest fragment of the New Testament ever found and would have placed it within the lifetime of some of the biblical characters.

Still, its dating to the late 100s or early 200s is significant, experts say.

“Much talked about old fragment of the Gospel of Mark has finally been published as P.Oxy. 5345 by @TheEES, which dates it to late second or early third century. If so, then it’s the oldest manuscript of Mark thus far identified and published,” professor Craig Evans wrote on Twitter. Evans is the John Bisagno Distinguished Professor of Christian Origins at Houston Baptist University.

“It’s not first century after all. Still, it’s the earliest dated copy of Mark’s Gospel which is exciting!” Gurry wrote on Twitter.

The earliest-known fragment of the New Testament dates to about 125 A.D. and is from John’s Gospel, Baptist Press reported.