OVER 100,000 citizens protested in Prague, Czech Republic on Wednesday Sept 28, 2022 under the motto “Czechia First.”

It was the LARGEST RALLY in Prague since the fall of the Communist regime over 30 years ago.

And, just like in America, the far-left media in the Czech Republic completely ignored the massive demonstration.

The protesters rallied against NATO and the EU elites destroying their way of life. The group was organized by a group who call themselves “politically unaffiliated citizens.”

Our longtime friend and German MP Petr Byrstron was a top speaker at the event. 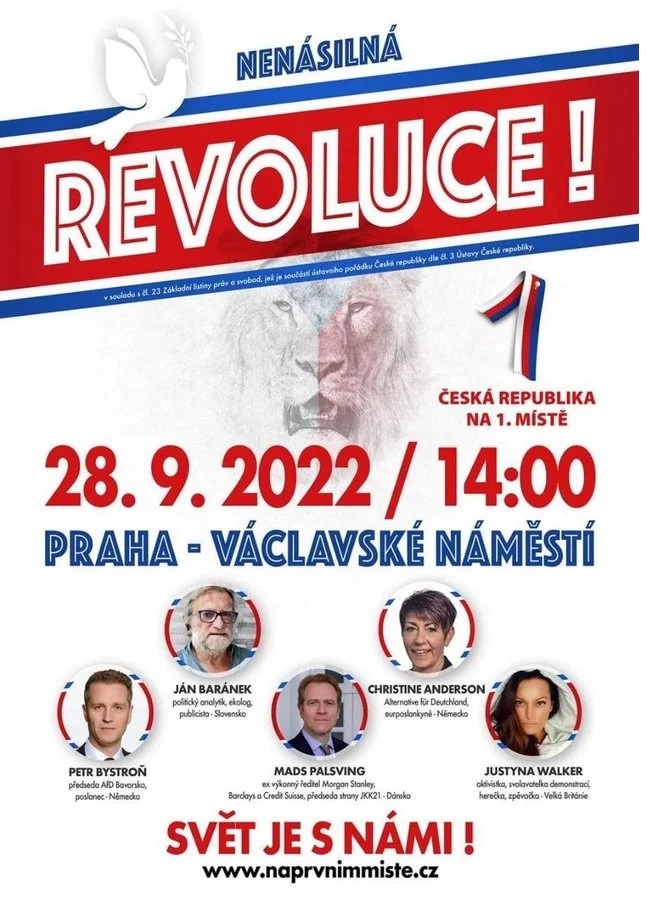 There were rallies in several Czech cities last week.

Petr Bystron’s spoke to the roaring crowd and gave a shout-out to President Trump.

On Sunday October 2nd, The Gateway Pundit’s Jim Hoft spoke with Petr on the movement in the Czech Republic and Germany.

This was an amazing interview. It is really chilling just how similar the globalist left acts in Western Europe with the same destructive policies and complete intolerance of opposing political voices.

Petr told TGP about the protest in Prague and an upcoming rally in Berlin on October 8th.

Petr told us about what the Germans and Czechs are saying about Russia and who they believe sabotaged the Nord Stream pipelines.

Petr also told us about Russia’s gas lines to Europe during the Soviet days and today.

And Petr Bystron spoke about the hundreds of Antifa rioters who threatened his family and vandalized his home last year on election night.

Petr is part of the populist future of Europe. It was an honor to speak with our friend Petr Bystron in Berlin.

12 months ago
More than 2,000 employees filed a class-action lawsuit against United Airlines for religious and medical discrimination over the unconstitutional vaccine mandatory. Captain Sherry Walker, the co-founder of Airline Employees 4 Health Freedom, told The Gateway Pundit that many of her colleagues have been terminated by United for not violating their faith, or for being too ill to take the shot. “The stories are sad and evil. Our woke CEO is harming our people and perpetuating the destruction of our nation for his bottom line,” she added. The lawsuit … Read More

1 year ago
EastEnders is regime propaganda. The British political and media elites want you to think that the only problem with Islam is that far-right bigots are full of hatred. Jihad? What’s that? You’ll never, ever see an EastEnders storyline in which Dana, having converted to Islam, decides to blow herself up in Trafalgar Square. Despite the fact that numerous converts to Islam have gotten involved in jihad activity, it would be inconceivable for EastEnders ever to show Islam in a negative light. “EastEnders spoilers: Harvey confronts Dana over Islam decision,” by … Read More

2 years ago
The Department of Justice filed a new lawsuit against Big Tech monopoly Facebook for engaging in pervasive and systemic discrimination against American workers, refusing to consider them for company positions and instead shepherding cheaper and more compliant foreign visa workers into more than 2,500 of the company’s high-paying jobs. The Department of Justice alleges that Facebook created a category of employment offerings in which none or one American worker applied more than 99% of the time, and were almost never hired. Facebook didn’t advertise job opening it restricted to … Read More

Joe Biden Says 250,000 Americans will Die From Covid in the Next Few Weeks, but “I Don’t Want to Scare Anybody”

2 years ago
78-year-old Joe Biden made the absurd claim that 250,000 Americans will die from Covid-19 in the next few weeks. Biden told Americans they “cannot be traveling for the holidays” and warned against gathering for Christmas. “I don’t want to scare anybody here but understand the facts: we’re likely to lose another 250,000 people — DEAD — between now and January,” said Biden. Biden’s claim is ten times higher than what is currently projected but of course no one fact-checked or disputed him. Senile Biden previously said 200 million … Read More

2 years ago
As a reminder, “cycle thresholds” (Ct) are the level at which widely used polymerase chain reaction (PCR) test can detect a sample of the COVID-19 virus. The higher the number of cycles, the lower the amount of viral load in the sample; the lower the cycles, the more prevalent the virus was in the original sample. Numerous epidemiological experts have argued that cycle thresholds are an important metric by which patients, the public, and policymakers can make more informed decisions about how infectious and/or sick an individual with a positive COVID-19 … Read More

2 years ago
Disturbing video out of Hong Kong shows family members of “political prisoners” saying hysterical goodbyes after China rounded them up onto buses headed for reeducation camps in the mainland. The heartbreaking footage shows a group of desperate Hong Kongers banging on the barred windows of the bus as it drives away to the Chinese mainland. Joshua Wong, Ivan Lam and Agnes Chow, who spearheaded the Umbrella Movement in 2019 against Communist China’s encroachment of Hong Kong’s sovereignty, were among the political prisoners boarded in the vans after getting sentenced last … Read More

2 years ago
Fifty-seven-year-old Bronx resident Paul Alexander was arrested Thursday for allegedly trafficking girls as young as 12 years old. “The arrest was the result of a joint investigation by the state prosecutor’s office called ‘Operation Mile High’ — a nod to his job as CEO of Central Jet Charter, New York Attorney General Letitia James said Saturday,” the New York Post reported. Alexander allegedly charged an undercover agent $300 for sex with two girls, with both victims earning a third of the money, the article read. The New York attorney general’s … Read More

2 years ago
Dr. Steven LaTulippe’s license was revoked by the Oregon Medical Board over his refusal to wear a face mask during the Covid pandemic. LaTulippe spoke at a “Stop the Steal” rally in Salem outside of the State Capitol on November 7 and said the Coronavirus is similar to a “common cold.” The medical board deemed the doctor “a serious danger to the public health and safety” and revoked his license. Dr. Tulippe said politicians are using Covid as a vehicle to shut down the American people and encouraged … Read More

2 years ago
The Trump administration has placed restrictions on the ability of Chinese Communist Party (CCP) members and their families to travel to the United States. The State Department has revised its policy to reduce the maximum duration of stay for CCP members and their immediate families who hold B1/B2 visitor visas—from 10 years to one month, a department official said in a Dec. 3 statement. Currently, there are around 92 million Party members in China. The official said the measure was made in line with the administration’s aim to “protect our nation from the CCP’s … Read More

2 years ago
The Georgia Senate Oversight Committee holds a hearing on the massive election fraud in the state.  Right Side Broadcasting Network covered the important hearing. 🔴 Donate to RSBN and help keep them on the air: http://rsbn.tv/donate Lunch break… Disturbing election night footage emerged showing Georgia poll workers waiting for observers and news outlets to leave State Farm Arena in Atlanta after calling an end to counting for the night, before pulling out several large suitcases containing ballots from under a table. he footage, presented by an attorney working with … Read More

2 years ago
President Trump provides an update on the “constitutional election process.” Trump described his speech as “the most important” he’s ever made, providing an “update” on the campaign’s “ongoing efforts to expose the tremendous voter fraud that took place during the ridiculously long November 3rd elections.” The President noted that: “Lots of bad things happened during this ridiculous period of time, especially when you have to prove almost nothing.” Trump summarized a number of allegations raised by former New York City Mayor Rudy Giuliani and other campaign lawyers. He … Read More

2 years ago
From the “where the rubber meets the road” department, comes this bombshell finding that flies in the face of claims about the universal boogeyman of “climate change” killing salmon due to it supposedly raising water temperature in streams where they spawn. Just last year, PBS and Popular Science were screaming about “climate change” being the cause with headlines like Climate Change is Killing Salmon in the Pacific Northwest and Climate change is cooking salmon in the Pacific Northwest It seems they were wrong, dead wrong. New University of Washington research published December 3rd in the … Read More

3 years ago
A top scientists for the United Nations admitted in leaked video that vaccines are dangerous and are killing some individuals, just days after assuring the public that vaccines were one of the safest tools humanity has. Dr. Soumya Swaminathan, the Chief Scientist of the World Health Organization, admitted that some vaccines are killing people during the WHO Global Vaccine Safety Summit last December in Geneva, Switzerland.   “I don’t think we can overemphasize the fact we really don’t have very good safety monitoring systems in many countries and … Read More

Paper: The Oligarch Takeover of US Pharma and Healthcare – And the Resulting Human Crisis

3 years ago
The United States runs the by far biggest and most bloated healthcare sector in the world when measured as a share of the total economy. Its annual value was $3.7 trillion, amounting to 17.9% of GDP (2018). That is nearly double the average of developed Western countries (as a share of GDP). The enormous expense does not buy Americans any better health than the Europeans get for half the price, in fact the health outcomes are far inferior in the US. In life expectancy, the US has fallen … Read More

4 years ago
A majority of “non-citizens,” including those with legal green card rights, are tapping into welfare programs set up to help poor and ailing Americans, a Census Bureau finding that bolsters President Trump’s concern about immigrants costing the nation. In a new analysis of the latest numbers, from 2014, 63 percent of non-citizens are using a welfare program, and it grows to 70 percent for those here 10 years or more, confirming another concern that once immigrants tap into welfare, they don’t get off it. The Center for Immigration Studies said in … Read More

4 years ago
The major U.S. media was missing in action at the United Nations COP24 “climate” summit in Poland, reported The New American’s foreign correspondent Alex Newman. Newman also reported on the significance of this conference, which is working to restructure all of human civilization under the guise of saving the climate. Finally, Newman addresses the real agenda behind the summit, which is to centralize power over humanity. Watch video… At UN, Gore Demands “Ubiquitous” Population Control for Climate (From TheNewAmerican.com) Amid freezing temperatures and heavy snowfall, former U.S. Vice … Read More