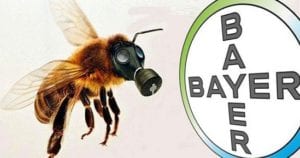 Unpublished field trials by pesticide manufacturers show their products cause serious harm to honeybees at high levels, leading to calls from senior scientists for the companies to end the secrecy which cloaks much of their research. The research, conducted by Syngenta and Bayer on their neonicotinoid insecticides, were submitted to the US Environmental Protection Agency and obtained by Greenpeace after a freedom of information request. Neonicotinoids are the world’s most widely used insecticides and there is clear scientific evidence that they harm bees at the levels found in fields. Neonicotinoids were banned from use on flowering crops in the EU in 2013, despite UK opposition. The newly revealed studies show Syngenta’s thiamethoxam and Bayer’s clothianidin seriously harmed colonies at high doses, but did not find significant effects below concentrations of 50 parts per billion (ppb) and 40ppb respectively. Such levels can sometimes be found in fields. However, scientists said all such research should be made public. “It is hard to see why the companies don’t make these kinds of studies available,” said Prof Dave Goulson, at the University of Sussex. “It does seem a little shady to do … the very studies the companies say are the most important ones – and then not tell people what they find.” Syngenta had told Greenpeace in August that “none of the studies Syngenta has undertaken or commissioned for use by regulatory agencies have shown damages to the health of bee colonies”. Goulson said: “That clearly contradicts their own study.”

Note: The Cable News Network (aka: the Communist News Network, CIA News Network, Clinton News Network, Concocted News Network, etc.) is simply fake news. According to CNN’s own three-time Emmy award winning journalist, Amber Lyon, CNN is routinely paid by the US government to make up fake news and also to selectively report on certain events in ways that fit their narrative. Plus, the Obama administration even paid CNN for editorial control over their content, badly distorting the news in their(...)

Go to Term Page
" >CNN News reported in 2010 that Bayer covered up the link between its products and massive bee die-offs. Read more about how these pesticides sicken bees and harm food crops. For more along these lines, see concise summaries of deeply revealing food system corruption news articles from reliable major media sources.

1 year ago
From their website… We exist to counter the massive disinformation campaign regarding the pandemic. We are diverse, exceedingly well-credentialed physicians with extensive front line experience treating COVID-19 and the risky health effects due to the lockdowns. There are many early treatment options! Most people do just fine! There is no reason to live in fear! If you would like to know the facts from doctors who are passionate about giving you those facts, watch our videos, found under Summit. If you need access to early treatment go to Referral … Read More