Until now, there has not been one single published study that compared them to see who is healthier (or sicker) years after the shots. This first-of-its-kind study of vaccinated vs. unvaccinated American homeschooled children shows who is really ailing.

Read it if you want and choose what you believe is the best option for your child.

According to ScienceDirect, an estimated 43% of US children (32 million) currently have at least 1 of 20 chronic health conditions, not including obesity.

We’re seeing once-rare pediatric disorders from Tourette’s syndrome and type 1 Diabetes to autism and ADD soaring, though there’s little pooling of data. It seems to me if people really wanted hard science, this would have been done!

Compared to their parents, young children today are four times more likely to have a chronic illness.

According to CCHR International, a mental-health watchdog, today’s generation of kids is a pharmaceutical company’s dream:

We’re assured vaccines are “safe and effective” even though public health officials acknowledge they sometimes have serious side-effects including death and despite the troubling fact that no long-term study of their effects on overall health has ever been conducted. In medicine, this used to be unthinkable!

And so the numbers keep climbing: 50 doses of 14 vaccines by age six, 69 doses of 16 pharmaceutical vaccines containing powerfully immune-altering ingredients by age 18. 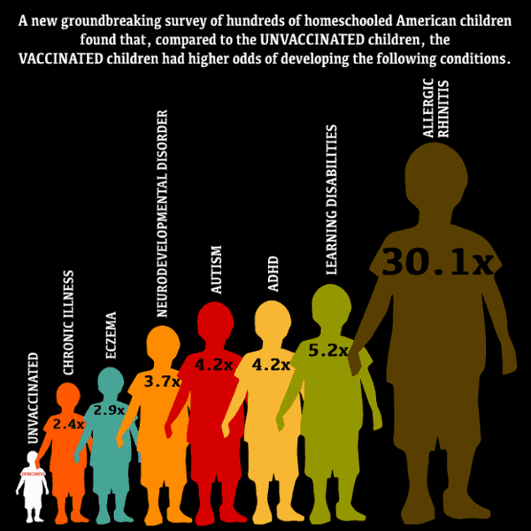 Nearly 700 homeschooled six to 12-year-olds from four states, compared 261 unvaccinated children with 405 partially or fully vaccinated children, and assessed their overall health based on their mothers’ reports of vaccinations and physician-diagnosed illnesses.

What it found about increases in immune-mediated diseases like allergies and neurodevelopmental diseases including autism, should make all parents think twice:

The trouble with doing a vaccinated vs. unvaccinated study 60 years or so after it should have been done is that virtually all American children are vaccinated today. When 95 percent of children get injections, there are few ‘controls’ left for studying long-term outcomes.

Comparing American children at large to small pockets of unvaccinated children like those in the Amish community is revealing, but critics say they are comparing apples to oranges. There are too many other variables — diet, fresh air, computer time, for example – that might explain differences in health besides vaccination status.

So, Anthony Mawson, a professor in the Department of Epidemiology and Biostatistics in the School of Public Health, Jackson State University, along with colleagues Azad Bhuiyan and Binu Jacob, collaborated with Brian D. Ray, president of the National Home Education Research Institute, to engage and enroll homeschooling families through an anonymous online survey to participate in the study.

In this way, homeschoolers were compared to homeschoolers (apples to apples), but with the added advantage that homeschoolers as a population match the profiles of American families at large.

However, in spite of public health hysteria over outbreaks of measles at Disneyland and mumps resurgence, there was no evidence that vaccinated children were any more protected against these so-called “vaccine-preventable diseases”. Children in both groups had about the same rates of infection with measles, mumps, Hepatitis A and B, influenza, rotavirus and meningitis (both viral and bacterial). (see ‘Acute Illness’ below Table 1).”

In the homeschooler study, the risk of being diagnosed on the spectrum was more than four-fold higher among vaccinated children (OR 4.3).

The CDC still quotes a 2004 Pediatrics study claiming to debunk a link between autism and vaccines even though one of its authors, their own top scientist William Thompson, admitted that he and colleagues colluded to obscure and then shred data (he kept copies) showing a link between autism and the MMR vaccine. Thompson confessed in one taped telephone chat to Brian Hooker, a bioengineer professor at Simpson University and the father of an autistic child.

The Thompson whistleblower case is the basis of the 2016 documentary Vaxxed: From Cover-Up to Catastrophe by Andrew Wakefield, the gastroenterologist who was among the first to suggest a link the MMR vaccine and autism  in the late ‘90s, and who has become a symbol of how the system deals with dissenters. It’s the film the CDC does not want anyone to see.

Brain and nervous system damage from vaccines is nothing new. Crippling Acute Disseminated Encephalomyelitis, for example, (which causes MRI-visible white spots on the brain), is a documented side effect for virtually every vaccine. Narcolepsy and Guillain Barré Syndrome are other examples.

Mercury, aluminum and what else?

Vaccine ingredients are known to cause brain damage. Robert Kennedy, Jr. has been highlighting the dangers of mercury as thimerosal used as a preservative in vaccines and its relationship to autism.

Aluminium is another powerful, well-documented neurotoxin added to vaccines as an adjuvant to evoke an immune system response. Recent research has thrown everything scientists used to say about it (and the CDC still does) in the bin: aluminum has a half life of a week, and is not excreted from the body within hours or days, persisting for years and migrating to organs including lymph, spleen and brain. Aluminum in vaccines has been implicated in studies on Chronic Fatigue Syndrome, Macrophagic Myofasciitis in numerous autoimmune diseases, Alzheimer’s disease, in sudden deaths following vaccination and in autism.

The FDA does not deny its toxicity – just that there is not enough aluminum toxin in vaccines to cause harm. But it calculates risk based on oral exposure. Even so it describes memory impairment in lab mice and “very young animals [which] appeared weaker and less active [and] less coordinated when their mothers were exposed to aluminum during pregnancy and while nursing.”

Injected exposure can hardly be safer. “It should be obvious that the route of exposure which bypasses the protective barriers of the gastrointestinal tract and/or the skin will likely require a much lower dose to produce a toxic outcome,” says a 2014 review implicating aluminium in the autism epidemic.

Besides toxic metals like aluminum and mercury, vaccines may contain contaminants from DNA from human aborted fetus cells, animal DNA and retroviruses and a host of debris and metal contaminants that are not measured by oversight agencies and whose health effects have never been studied.

As a possible mechanism for vaccine-induced ear infection, study authors Mawson and colleagues cite a 2006 study that looked at the types of bacteria in the nasal passages of children immunized with pneumococcal vaccine vs. “historical control” – kids from the prePCV-7 era – and found an increased colonization of a bacteria called M. catarrhalis in the vaccinated group. M. catarrhalis, it turns out, is associated with an increased risk of ear infection.

No surprise then that vaccinated children in the study were over two-fold more likely to have taken antibiotics (OR 2.7). They were also hospitalized more often (OR 1.8).

Allergic rhinitis (hay fever) is another one of those current inexplicably soaring pediatric plagues; in 2012, it affected 6.6 million children. It is strongly associated with another spiking childhood disorder, asthma. More than three million American kids have a food allergy and one in four children have eczema. Worldwide, allergies have been increasing and they now affect almost half of all American school kids.

All this allergic disease was leading to more medication. The vaccinated children in the study were 22-fold more likely to have taken allergy medicine than the unvaccinated.

“Other than vaccination itself, there was no explanation for the differences in health outcomes observed between the vaccinated and unvaccinated groups of children,” the study’s authors concluded.  Although the design of the study limits causal interpretation, they added, there is an apparent dose-response relationship between vaccination and chronic illness, with the partially vaccinated showing intermediate odds of being diagnosed with chickenpox and whooping cough as well as ear infection, pneumonia, allergic rhinitis, ADHD, eczema, and learning disability (see Table 4).

For more than a century it has been accepted public health dogma that vaccine benefits outweigh risks. What’s more, with the introduction of five new vaccines since 1995 bringing the total inoculations to 35 by kindergarten age, studies of the combined effect of vaccines have never been done. The reality is: real vaccine benefits are theoretical and real vaccine risks are unknown.

The emerging vaccine “war” is really growing numbers of “hesitant” parents (and health practitioners) questioning the CDC vaccine schedule for good reasons: Why are doctors who profit from vaccines the spokesmen for public health? Can government health agencies really be trusted to protect our children when they are so wedded to the pharmaceutical industry?  Why are toxins in vaccines? Does my kid really need this vaccine or is somebody selling it, like Coca Cola and video games? Why is it acceptable to knowingly sacrifice some children for the greater good? Is that greater good real or is it a mirage?

That vaccines may sometimes curb natural infections like chickenpox sometimes appears to be the case. But if they are such a miracle, then why are American kids so sick?

This pilot study shows us that if mainstream medicine and our public health agencies are really interested in children’s health, not just vaccine profits or defending vaccine religion against blasphemy, what is needed is not the will to make everyone believe, but the courage to find out.