Skip to content
[NEW YORK — Apr. 13, 2021] Project Veritas released a new video today exposing CNN Director Charlie Chester, who admitted that his network engaged in propaganda to benefit Biden’s candidacy during the 2020 election to the detriment of then-President Trump. Chester also said CNN has a pre-determined agenda when reporting on COVID-19 and climate change.

During a conversation with a Veritas journalist, Chester boasted about the impact the network had in determining the outcome of the presidential race last year.

“Look what we did, we [CNN] got Trump out. I am 100% going to say it, and I 100% believe that if it wasn’t for CNN, I don’t know that Trump would have got voted out…I came to CNN because I wanted to be a part of that,” Chester revealed.

Chester explained to the Veritas journalist how CNN engaged in “propaganda” when covering Trump’s health compared to Biden’s health.

“[Trump’s] hand was shaking or whatever, I think. We brought in so many medical people to tell a story that was all speculation — that he was neurologically damaged, and he was losing it. He’s unfit to — you know, whatever. We were creating a story there that we didn’t know anything about. That’s what — I think that’s propaganda,” Chester said.

Watch the video at Project Veritas…

Below, James O’Keefe confronts Charlie Chester at a restaurant:

Project Veritas dropped part two of their CNN exposé the next day, in which CNN Technical Director Charlie Chester admits that they use COVID scaremongering to drive ratings.

During the shocking video, Chester explains how the network uses “manipulation” to shape public opinion.

“Any reporter on CNN — what they’re actually doing is they’re telling the person what to say… It’s always like leading them in a direction before they even open their mouths. The only people that we [CNN] will let on the air, for the most part, are people that have a proven track record of taking the bait,” Chester explained.

“I think there’s an art to manipulation…Inflection, saying things twice — there’s little subtleties to how to manipulate people…I mean, it’s enough to change the world, you know?”

Chester also grimly described how they often want COVID death tolls to be higher to “make our point better.”

“Like, why isn’t it high enough, you know, today? Like it would make our point better if it was higher. And I’m like, what am I f***ing rallying for? That’s a problem that we’re doing that.”

Chester also described how CNN has used fear of the COVID-19 pandemic to keep viewers tuning in.

He added, “COVID? Gangbusters with ratings, right? Which is why we [CNN] constantly have the [COVID] death toll on the side.”

Chester said that the network’s president Jeff Zucker would call in to the CNN newsroom during live TV segments and order the staff to keep COVID death tolls on the screen.

“The special red phone rings and this producer picks it up. You hear [murmurs] and every so often they put it on speaker and it’s the head of the network being like, ‘There’s nothing that you’re doing right now that makes me want to stick, put the [COVID death toll] numbers back up, because that’s the most enticing thing that we had. So, put it back up.”

Describing their manipulation, Chester said that they throw in feel good stories because most of their coverage is “doom and gloom.”

“No one ever says those things out loud, but it’s obvious based on the amount of stories that we [CNN] do. The fact that we have a segment called ‘The Good Stuff’, which is a feel-good thing, but it’s a dedicated moment at the end to almost be the ice cream to alleviate everything that you’ve been through. Something sweet to end it with because everything else is doom and gloom,” he said.

Source for Part 2: The Gateway Pundit

Project Veritas on Thursday released a third bombshell undercover video of CNN Director Charlie Chester admitting that the network is “trying to help” Black Lives Matter by protecting their narrative on race. Chester admitted that they have only been pushing stories that implicate white people, during a conversation with a Tinder date that ended up being a Project Veritas reporter. Chester admitted that while researching Asian hate, they found that it is mostly black men attacking them — so they did not dig in deeper. 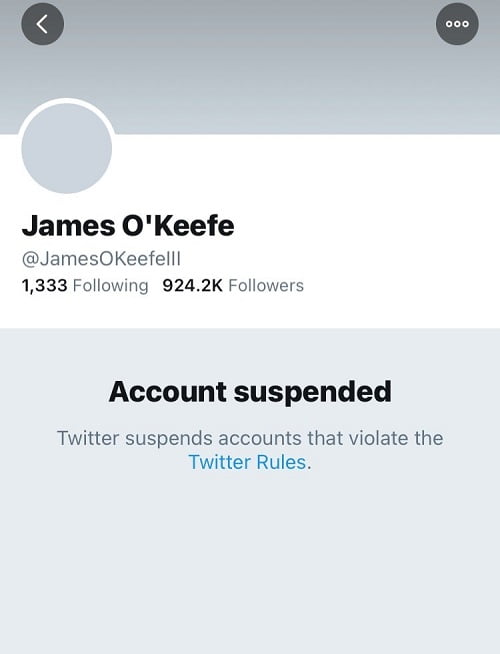 In response, James O’Keefe plans on suing Twitter for defamation.

After the latest round of hidden camera videos embarrassing to CNN were released, @JamesOKeefeIII has been permanently banned from Twitter. The @Project_Veritas account was also recently banned. This is how big tech works with liberal corporate media to take down challengers.