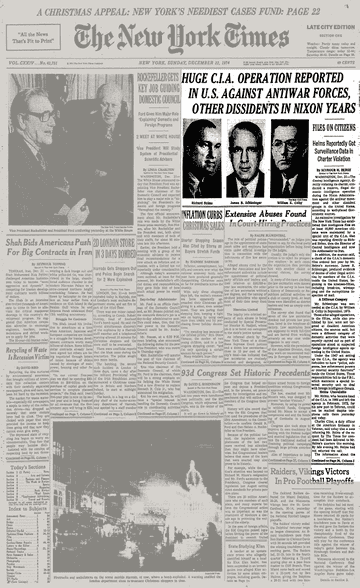 Go to Term Page
" >war and civil rights groups in the U.S. that began under President Johnson in 1968. The story sparks national outrage.

Read the story in the NY Times Archive HERE

Operation CHAOS or Operation MHCHAOS was the code name for an American domestic espionage project conducted by the Central Intelligence Agency from 1967 to 1974, established by President Johnson and expanded under President Nixon, whose mission was to uncover possible foreign influence on domestic race, anti-war and other protest movements. The operation was launched under Director of Central Intelligence (DCI) Richard Helms, by chief of counter-intelligence, James Jesus Angleton, and headed by Richard Ober.  The “MH” designation is to signify the program had a worldwide area of operations.