According to the official story: 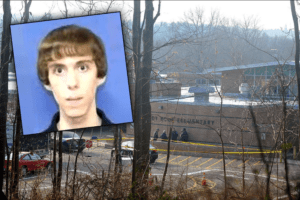 In Newtown, Connecticut, 20-year-old Adam Lanza fatally shot 20 children aged between 6 and 7 years old, as well as six adult staff members. Prior to driving to the school, Lanza shot and killed his mother at their Newtown home. As first responders arrived at the scene, Lanza committed suicide by shooting himself in the head. Read more on Wikipedia.

The incident was the deadliest mass shooting at a high school or grade school in U.S. history and the third-deadliest mass shooting by a single person in U.S. history. The shooting prompted renewed debate about gun control in the United States, including proposals for making the background-check system universal, and for new federal and state gun legislation banning the sale and manufacture of certain types of semi-automatic firearms and magazines with more than ten rounds of ammunition. A November 2013 report issued by the Connecticut State Attorney’s office concluded that Lanza acted alone and planned his actions, but no evidence collected provided any indication as to why he did so, or why he targeted the school. Below are the guns he was said to have had on him.

According to Wolfgang W. Halbig, a humble straight-talking 67-year-old man who has an impressive professional record as a law enforcement officer (U.S. Customs inspector and Florida state trooper), an educator (public school coach, teacher, assistant principal and principal), and a nationally-recognized school safety consultant who has served as an expert witness in the Columbine and other school shootings…

Being a school safety consultant who has traveled to every state in America to investigate and testify on school shootings, Halbig calls every shooting “a puzzle” that must be pieced together. In the case of the Sandy Hook massacre, however,  the pieces of this puzzle simply “don’t fit.” Fellowship of the Mind has transcribed the missing pieces of the Sandy Hook puzzle from an interview with Dave Gahary of American Free Press. Those pieces include:

Newtown, CT is the East Coast HQ for The Church of Satan

What is the Church of Satan and How Do I Get Involved?
If you would like to receive an official information packet on our Church of Satan outpost in Connecticut, (AKA Church of Tiamat) or if you have questions, write to: