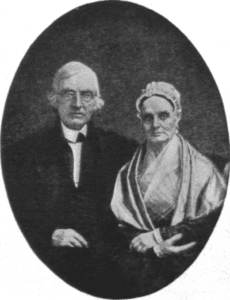 The American women’s rights movement began with a meeting of reformers in Seneca Falls, New York, in 1848. Out of that first convention came a historic document, the ‘Declaration of Sentiments,’ which demanded equal social status and legal rights for women, including the right to vote.

Purpose of the Convention

The first convention for women’s rights in the United States was held in Seneca Falls, New York, from July 19-20, 1848. More than 300 people attended this meeting devoted exclusively to addressing the status of American women who, according to organizer Elizabeth Cady Stanton, (1815-1902), ‘do feel themselves aggrieved, oppressed, and fraudulently deprived of their most sacred rights.’ Stanton and Lucretia Mott (1793-1880) were the main organizers of the convention. Stanton was primarily responsible for the writing and presentation of the Declaration of Sentiments.

On the second day, even more people attended and participated, both men and women. Lucretia Mott’s husband, James Mott (an anti-slavery activist), served as chair of the day’s meeting. Stanton again read the revised Declaration of Sentiments and the final version was submitted for signatures. Not all who attended the convention signed the declaration. There were just 100 signatures from among the estimated 300 who were present and heard it read. Even among reformers interested enough to attend the convention, there was still some reluctance about the full scope of women’s rights.

The issue of women demanding the vote was considered especially radical in 1848 and was the most debated issue at the meeting. After the resolutions in the Declaration of Sentiments were accepted and signatures gathered, both men and women gave speeches to end the convention.

The year 1848 when the first organized demand was made for woman’s rights, was marked by many revolutionary movements, “in the old world, as well as the new.” Rebellion was not only in the air, but in the earth beneath. In that year California startled us with her first earthquakes showing that mother earth sympathized with her daughters…

I stood alone in the demand for the right of suffrage. It was strenuously resisted in committee and in a prolonged discussion in the convention, but a resolution to that effect was passed at last, eloquently advocated by Frederick Douglass. He saw the degradation of disfranchisement by personal experience, and I, as clearly, by observation, that all civil disabilities of sex grew out of political inequality.

That thoughtful women were ready for such action, was shown by prompt calls for similar conventions in other States. Within four years Ohio, Indiana and Massachusetts were followed by others in New York. The Constitutional Convention in this State in 1847, and the passage of “the Married Woman’s Property Bill” in 1848, with hearings before committees and extensive circulation of petitions for woman’s rights to property and wages, all heralded by the press, had called public attention to woman’s condition under the civil laws before the press in the other States began to agitate the question.

The enthusiasm of reformers, both men and women, had found an outlet in the temperance, anti-slavery movements at that time, and they looked with coldness on our demands as of minor importance to the terrible evils they were combating, thus, we were deprived of the help of those who should have been our most active co-adjutors. The peculiarity of this reform is that we have been left to fight our own battle, to suffer and struggle in a four-fold bondage in which the transient interests of all classes are against us.

The State, the Church, the world of work and society in general, all fear the revolution woman’s emancipation would involve, overturning, as it would, everything based on the idea of man’s headship and woman’s subordination. It is the magnitude of this question, the far reaching consequences of our victory, that prevents honest minds giving it the consideration its importance demands.”