A senior Google research scientist has quit the company in protest over its plan to launch a censored version of its search engine in China.

Jack Poulson worked for Google’s research and machine intelligence department, where he was focused on improving the accuracy of the company’s search systems.

In early August, Poulson raised concerns with his managers at Google after The Intercept revealed that the internet giant was secretly developing a Chinese search app for Android devices. The search system, code-named Dragonfly, was designed to remove content that China’s authoritarian government views as sensitive, such as information about political dissidents, free speech, democracy, human rights, and peaceful protest.

After entering into discussions with his bosses, Poulson decided in mid-August that he could no longer work for Google. He tendered his resignation and his last day at the company was August  31.

He told The Intercept in an interview that he believes he is one of about five of the company’s employees to resign over Dragonfly. He felt it was his “ethical responsibility to resign in protest of the forfeiture of our public human rights commitments,” he said.

Poulson, who was previously an assistant professor at Stanford University’s department of mathematics, said he believed that the China plan had violated Google’s artificial intelligence principles, which state that the company will not design or deploy technologies “whose purpose contravenes widely accepted principles of international law and human rights.”

He said that he was concerned not just about the censorship itself, but also the ramifications of hosting customer data on the Chinese mainland, where it would be accessible to Chinese security agencies that are well-known for targeting political activists and journalists.

In his resignation letter, Poulson told his bosses: “Due to my conviction that dissent is fundamental to functioning democracies, I am forced to resign in order to avoid contributing to, or profiting from, the erosion of protection for dissidents.”

“I view our intent to capitulate to censorship and surveillance demands in exchange for access to the Chinese market as a forfeiture of our values and governmental negotiating position across the globe,” he wrote, adding: “There is an all-too-real possibility that other nations will attempt to leverage our actions in China in order to demand our compliance with their security demands.”

“I am forced to resign in order to avoid contributing to, or profiting from, the erosion of protection for dissidents.”

In the six weeks since the revelations about Dragonfly, Google has still not publicly addressed concerns about the project, despite facing a major backlash internally and externally. Earlier this month, Google CEO Sundar Pichai refused to appear at a Senate Intelligence Committee hearing, where he would have been asked questions about the China censorship. The company has ignored dozens of questions from journalists about the plan and it has stonewalled leading human rights groups, who say that the censored search engine could result in the company “directly contributing to, or [becoming] complicit in, human rights violations.” (Google also did not respond to an inquiry for this story.)

Poulson, 32, who began working for Google in May 2016, told The Intercept that the company’s public silence fueled his sense of frustration. “There are serious worldwide repercussions to this,” he said. “What are Google’s ethical red lines? We already wrote some down, but now we seem to be crossing those. I would really like to see statements about what Google’s commitments are.” 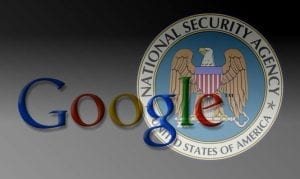 Google launched a censored search engine in China in 2006, but stopped operating the service in the country in 2010, citing Chinese government efforts to limit free speech, block websites, and hack people’s Gmail accounts. At that time, Google co-founder Sergey Brin made clear that he was strongly opposed to the censorship. Brin had spent part of his childhood in the Soviet Union, and said that he was “particularly sensitive to the stifling of individual liberties” due to his family’s experiences there. In 2010, after the company pulled its search engine out of China, Brin told the Wall Street Journal that “with respect to censorship, with respect to surveillance of dissidents” he saw “earmarks of totalitarianism [in China], and I find that personally quite troubling.”

Poulson said that he “very much agree[s] with the case Sergey made in 2010. That’s the company I joined, the one that was making that statement.” If the anti-censorship stance is shifting, he said, then he could no longer “be complicit as a shareholder and citizen of the company.”

Only a few hundred of Google’s 88,000 employees knew about Dragonfly before it was publicly exposed. Poulson was one of the majority who were kept in the dark. But because he was focused on improving the company’s search systems — specifically in an area called “international query analysis” — it is possible his work could have been integrated into the censored Chinese search engine without his knowledge or consent.

Once news of Dragonfly spread through Google, there were protests inside the company. More than 1,400 of the internet giant’s employees signed a letter demanding an ombudsman be appointed to assess the “urgent moral and ethical issues” they said were raised by the  censorship plan. The letter condemned the secrecy surrounding Dragonfly and stated: “We urgently need more transparency, a seat at the table, and a commitment to clear and open processes: Google employees need to know what we’re building.”

Google bosses have tried to contain the anger by shutting down employee access to documents about the China search engine. Following leaks from an all-hands staff meeting last month, sources said, the company has tightened rules so that employees working remotely can no longer view a livestream of the meetings on their own computers — they can only watch them inside a designated room at a Google office overseen by managers.

Poulson said he considered staying on as an employee of Google and trying to raise his protests from within. Some of his colleagues argued that the decision to launch the Chinese search engine may still be reversed, and encouraged him to wait before making his call on resigning. “But then I have no chance of changing that decision,” he said, “whereas if I resign beforehand, then there’s some chance of impact.”

Between May 2016 and July 2017, Poulson worked out of Google’s Mountain View headquarters, before he relocated to company offices in Toronto. He said he views his former Google colleagues as some of the smartest and most hardworking people he has ever met. But he is surprised more of the company’s employees have not quit over Dragonfly.

“It’s incredible how little solidarity there is on this,” he said. “It is my understanding that when you have a serious ethical disagreement with an issue, your proper course of action is to resign.”

Donate to The Intercept to help keep article like this coming!

Original article HERE at The Intercept