A dead body hanging upside down, struggling child with a knife to his neck, male & female genitalia high up on the walls of residential buildings. Some residents were shocked and many media outlets reported about complaints by some of the locals. The Bulletin magazine wrote that Brussels-City mayor Yvan Mayeur had said the painting could be seen as a call to violence, while Ans Persoons, Councillor in charge of culture and city planning said “I find it much too violent, and want to see it disappear as soon as possible.” The others, like the Flemish Minister for Culture and Brussels Sven Gatz expressed another view. He thinks that “art is free. Forbidden to forbid. Or are we going to ban Caravaggio as well?” 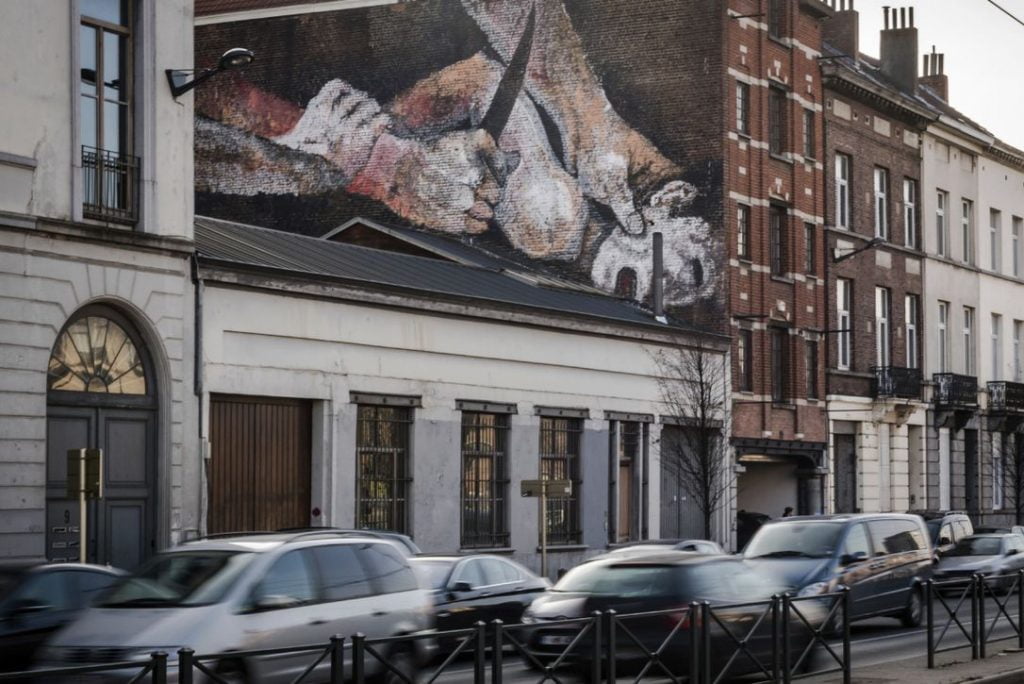 This one depicts a young boy held down by a man holding a knife. It is inspired by the painting “The There is something deeply wrong with our society if this is deemed “art” that is OK to display in the streets. 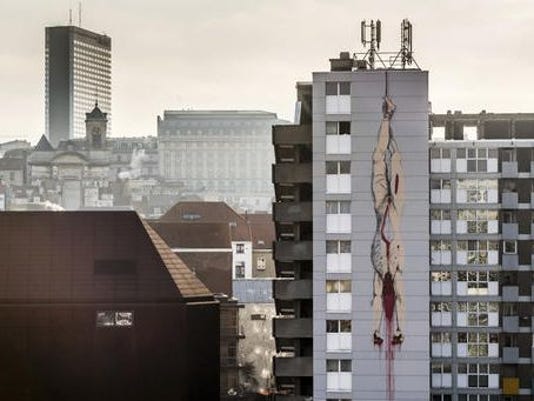 Another mural depicts gutted body hanging upside down with blood seeping out. In the end, this “art” is a symptom of the toxic mindstate that permeates society.

“Hellish and awful,” Nicole Brisard grumbled as she walked her dog, Max, past the bleeding corpse rendered in paint on seven stories of a low-rent apartment building. “And all we wish for is to have something better, out of respect for the people.”

The two murals that appeared last weekend have made their anonymous artist the talk of the European capital, posing a familiar question about art expressly created to provoke: how far can it go before the outrage becomes unacceptable?

Both the wall painting eliciting Brisard’s ire and the companion mural across town of a child facing death are oversized adaptations of details from well-known 17th century art works, “The Corpses of the De Witt Brothers” by Dutch master Jan de Baen and Caravaggio’s “Sacrifice of Isaac.”

The originals, respectively based on a historical, political murder and the Old Testament, are held by Amsterdam’s Rijksmuseum and the equally hallowed Uffizi in Florence.

Some parents in the grimy, gentrifying neighbourhood where the basketball court-sized mural of Isaac howling in fear is located have complained that children are having trouble sleeping because of the terrifying sight outside their windows.

“Lots of parents would not like that,” Brussels alderwoman Ans Persoons said.

It is almost as shocking to think they were painted on a few bitterly cold nights in Brussels while dangling down a rope and staying out of sight of authorities. (TheStar)